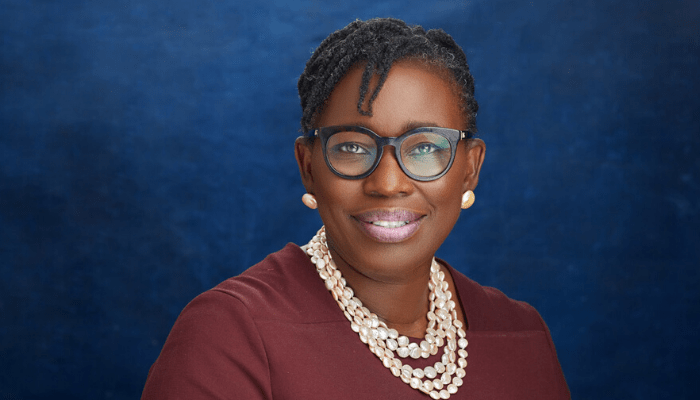 Hamda Ambah, Managing Director/Chief Executive Officer of FSDH Merchant Bank, is one of the leading women playing in the Nigerian financial services sector.

A strong voice in Corporate Nigeria and the wider economic space, Hamda became the Chief Executive of the bank in February 2017 having previously served effectively as an Executive Director from September 2009 to January 2017. Since February 1, 2017, when she mounted the saddle as the head honcho, the story of her bank has been that of total transformation and ground-breaking achievements that speak to her quality as a corporate titan in a male-dominated sector.

Ambah is a well-grounded banker who has a mastery of her craft. Before her current status, she was in charge of the bank’s marketing teams including; Corporates, multinationals, middle-tier corporations, telecommunications and the energy sector as well as the Port Harcourt and Abuja Regional offices.

Under her leadership, FSDH has continued to post impressive results and attain local and international recognition. In 2017 and 2019, the London Stock Exchange named the bank ‘Company to Inspire Africa’ because of its meteoric rise in the firmament of merchant banks across the continent.

Despite the general repressed economy of Nigeria since 2015, FSDH posted N3.86billion profit after tax in 2017 and grew profitability after tax by more than 70% in 2018 with N5.18billion. While providing cutting-edge financial solutions to businesses across diverse sectors of the economy, FSDH supports clients and ensures success, through tailored services that meet their aspirations.

Ambah graduated from the University of Lagos in 1980 and proceeded to the Imperial College of Science & Technology, London for her Postgraduate qualifications. Before joining FSDH Merchant Bank in 1993, Hamda was at Reuters Ltd Nigeria where she served as a Senior Executive for about five years and was solely responsible for the Nigerian sales accounts. Prior to this, she worked at the International Merchant Bank Plc, Lagos, Nigeria after joining the company in December 1982. She is a member of the Nigerian Chartered Institute of Stockbrokers and was the recipient of the1999 IBTC award for the best examination candidate in Corporate Finance.

For Hamda, because there are various financial institutions that are created to deliver services to their clients, there is the need for FSDH to distinguish themselves. For her, it is about integrity. “What sets us apart is the focus that we put on integrity and for us, integrity is not just about ‘not stealing’ (obviously integrity precludes us from stealing), it is also about being truthful to the client and putting the client first.” She said. By putting her clients first, she means “If the clients ask for our advice on transactions which we consider not to be in their interest to do, even though there’s an opportunity to do something that can make us a lot of money at that time, we will tell them not to do the transactions. We may be a small firm, but we value relationships.”

According to her, their customer outlook is fostering a relationship that will be retained for years, so they don’t have to try and collect every kobo today. “If the relationship lasts, the value of a long term relationship will always be much more than a transactional relationship. So for me, it’s important for our client to trust us. In our environment, trust doesn’t come naturally, because people and situations will test you”, Ambah said.

Sparkle officially launches: A new digital ecosystem to transform the lives of Nigerians…

Bola Preye Ayo, the exceptional political lobbyist on top of…