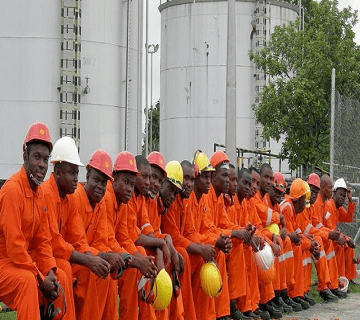 Share
Petroleum and Natural Gas Senior Staff Association of Nigeria (PENGASSAN) and the Nigeria Union of Petroleum and Natural Gas Workers (NUPENG) on Monday, February 3, 2020 disrupted business activities at the headquarters of General Electric (GE) over alleged non settlement of exit benefits of their ex-staff four years after disengagement from service.
The main entrance to the company’s  office located on Bishop Aboyade Cole, Victoria Island, Lagos was blocked early Monday morning by the protesting NUPENGASSAN members.
The workers are demanding for the protection of their rights “after long period of failed promises” by their former employer.
The protesters, who are largely clad in red attire, were seen chanting solidarity songs, carrying placards with various inscriptions and also baring their minds on what prompted the action against the company, despite several entreaties by relevant authorities including the Department of State Services to resolve the crisis but all to no avail.
The affected workers expressed displeasure over the refusal of Arco Group, an employment contractor to General Electric to pay their severance packages.
Justifying the action, head of Lagos zone of NUPENG, Badmus said “Nigerians cannot continue to be treated with disdain or contempt and that the rights of workers cannot continue to be abused without grief consequences such as this.”
Share FacebookTwitterLinkedinWhatsAppEmail