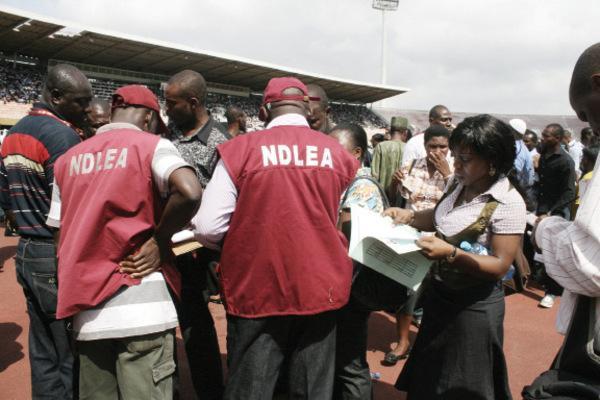 The National Drug Law Enforcement Agency (NDLEA) has destroyed over 5,000 hectares of cannabis otherwise known as Indian hemp forest at Ala Forest in Akure North local government of Ondo State.

The Agency further advised the state government to encourage alternative farming which will move cannabis planters to cocoa farming.

The armed combatants of the Special Enforcement Team(SET) from the six geo-political zones of the country, numbering over 200 were led in the sting operation by Sunday Zirange, Controller of Operation of the NDLEA, under the directive Col. Mustapha Abdallah (rtd), the agency’s chairman/chief executive officerto the state for the two day operation.

Fourteen suspects, including male and female were arrested during the operation in some of the farms. Two other suspects who abandoned their beans on fire inside a hut when they saw the approaching team were later apprehended in a nearby farm.
Over 100 labourers were engaged by the agency to cut all the cannabis in the presence of journalists and other observers.

The Ala plantation is in the thick forest, about 70 kilometres to Ogbese town, allegedly notorious of cannabis cultivation particularly in the state, with the only one access road impassable.

Speaking to reporters, on behalf of the NDLEA chairman, Zinrange lamented the rate of deforestation in the southwest especially Ondo state, stressing that in the next 10 years if care is not taken, the thick forest in the west would have disappeared.
“The Northern part is a desert region, with fast encroachment while the south which is supposed to be the hope of the nation is being used for cannabis cultivation and the destruction of economic trees. These people engaged in this illegal business aligned with some influential people who collaborate with them to cultivate cannabis.

“This development is affecting this country; all hands must be on deck, because the situation will affect the whole world with the issue of global warning as a result of environmental degradation.
“Last year about 72 tonnes of cannabis were seized in Ondo forest zone, now we decided to be on the plantation site for us to see things for ourselves, you can see, there is no standing trees again, we will bring those arrested to justice”, he said.
Mohammed Mallami, the state Commandant of NDLEA, Sokoto said the state was blessed with a vast forest which contributed to the impunity of the cannabis cultivators.
He said: “Apart from Ala forest with its difficult terrain, there are about five or six other forest reserves including Ogbese,Ose,Idanre.They will start cultivation in February and around now, harvesting will commence”.

He said the NDLEA is partnering with the state government to know about happenings in its forests, which is a source of revenue generation.

“We are taking a proactive measure aimed at alternating cash crops and cultivation of economic trees especially Cocoa in order to eradicate cultivation of Cannabis. We came with a convoy of over 20 vehicles and trekked for over three hours because of the bad road and difficult terrain to access, there are very large hectares of cannibal forests we are taking over within a week”, he further stated.