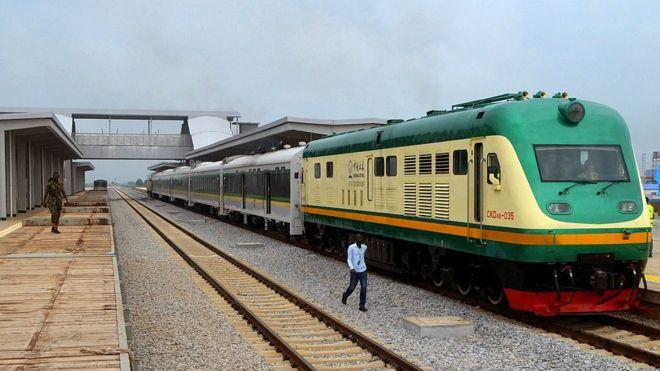 Rail to port and port to rail freight haulage operations on the old narrow gauge tracks by the NRC was officially suspended yesterday to enable Chinese Civil Engineering & Construction Corporation (CCECC) resume work along the corridor which was earlier suspended during the out of the coronavirus pandemic.

Apart from the enormous revenue loss that will be recorded by the NRC, others like APM Terminal with a larger chunk of rail connectivity for freight movement, ENL and Dangote group and other corporate organisations will also have to pay more by road for the movement of containers in and out of the Apapa port when compared what it costs to transport it by rail.

In total, there are six rakes of wagons that can carry either 19 units of 40 feet containers or 38 units of 20 feet containers out of Apapa for different shipping companies. The NRC was operating two shifts daily at some point, but had to drop to one trip a daily as a result of the coronavirus scourge.

Due to complete suspension of freight movement that will last between September 15 and Novemver 14, Jerry Oche, Lagos regional district manager (RDM) said, the NRC will be entering into another phase of revenue squeeze.

While the RDM declined to estimate the exact amount the NRC will lose within the period of freight haulage shutdown, he said, the loss in rvenue will will be enormous.

Checks by BusinessDay reveal that throughout the 60 days period when the standard gauge construction by the Chinese company will last, there are speculations that, the locomotives used for the wagons may be deployed to complement the mass transit train services (MTTS) return trip operations from the Iddo to Ijoko terminals.

During the last inspection tour of the project by Rotimi Amaechi, Nigeria’s minister of transportation, the CCECC project team said that, there are plans to shutdown the narrow gauge line from September 15 to November 14, 2020 to enable commence project works from the Ebute Metta Junction (EBJ) to link Apapa seaport. The rail line extension to Apapa was an addendum to the $1.5 billion Lagos-Ibada standard gauge. The successful completion will fast track movement of cargo by rail, reduce the pressure from the road as a well as allow free traffic flow within Apapa which has become a national embarrassment over the years.