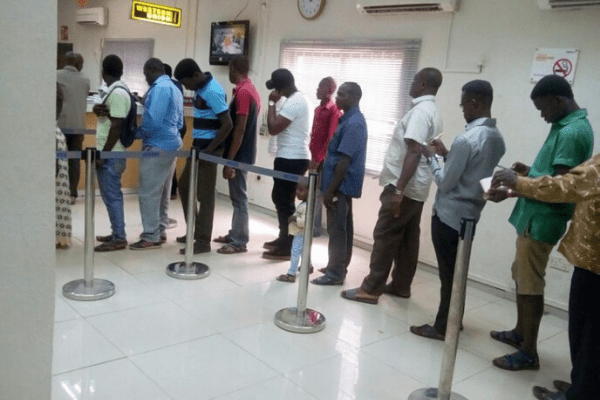 As the silver mantrap door opens into the main bank hall, the length of the queue on the teller section is the first to hit this reporter. It is so long, the security officer has to curve the queue twice.

The faces the people on the line make give away their frustration of having their time prolonged unnecessarily for just the misfortune of working into a bank hall. The three teller staff don’t look happy either, having to deal with so many disgruntled customers can take a toll even on the best-intentioned worker.

In front of the staff are more than 10 customers waiting to bark a request at her. To make matters worse, she is having trouble with the printer beside her desktop computer – an old model HP desktop. She calls a colleague to help check the troublesome printer while the woman sitting in front of her fidgets on her seat barely holding back an outburst for being kept waiting.

Finally, the worn-out bank staff looks up at the woman opposite her;

“How may I help you,” she said in a voice heavy with unpaid sleeplessness.

The experience happens in nearly all the banks across Lagos. At another bank branch, this reporter has visited a couple of times, also located within Apapa, the queue could grow so long that the staircase area would be swarmed by human bodies.

Once in a while, a senior bank official would come and usher a group of customers to a tiny room where their slips are quickly collected and are asked to go with a promise of a swift turnaround. Most of the customers say they usually get delays instead.

Banks are not new to technology but the advent of fintech and the promise of disruption pushed them into a frenzy to innovate immediately.

As the threat of fintech started manifesting in the form of startups securing millions of dollars from foreign investors, banks moved quickly to secure their positions with huge investments going into upgrading and acquiring new digital technology tools like cloud, artificial intelligence, and software.

The audited reports of 10 Nigerian banks showed that as of December 2018, they cumulatively invested N120 billion building and upgrading their software. This represents a 55 percent increase from 2016 when the banks collectively reported N77.35 billion investment in software technology.

It is not just Nigeria alone, data from Accenture show that globally banks have invested $1 trillion in technology over the past four years to get their business out of the corner and into the digital sphere.

The difference for Nigeria is banks have been very aggressive to innovate mostly to keep their customers and attract new ones. Most of the efforts have been towards staying ahead of new competition and secure shareholders’ funds. Very few have seen innovation primarily as a way to enhance the customers’ experience.

For Nigeria, the past four years have been the most intense as banks built digital experience centres manned mostly by ATMs, mobile applications that promised to do everything customers could want to do in the physical branches, created chatbots with cool names, WhatsApp banking and deployed thousands of Point of Sales (PoS) terminals.

Although the investment in technology is partly aimed at getting more customers to adopt digital banking thereby reduce the overhead cost banks bear, many customers still prefer going into the branches. For customers living in regions where connectivity is still a problem, the best option they have is the physical branches.

Deloitte’s most recent global digital banking consumer survey found that in most countries, a majority of people prefer opening major accounts (mortgages, wealth management) or applying for new financial products in a branch, rather than online.

But while more investment is being channelled towards improving technological capabilities, little seems to be happening inside the old branches. In many of them it is still the old model of banking that prevails;

Customers go through security, enter the bank hall, pick up a slip for withdrawal or deposit, fill the blank spaces, join a queue, delayed for different reasons, finally get the “Next” call and attended to, then exit the bank.

Despite millions of dollars spent on software, internet service is still very poor in nearly all bank branches. Bank officials still struggle with old equipment, when they can’t help it inform customers that “the system is down.”

In some bank branches in remote areas, customers are subjected to sweaty conditions because the air conditioners (AC) are either faulty or non-existent.

“The bank branch (name withheld) at Ibrahim Taiwo Road Ilorin (Kwara State) that one no AC, only one dead-looking standing fan with some old men and women; the queue is so long with some very slow set of tellers,” said Salawu Damilola, a bank customer.

Banks have to know there is more to providing optimal customer service than a mobile application, chatbot, and a website. Thus, the physical bank branch is still an asset to any bank and therefore deserves an equal significant upgrade in technology.

Customers want to get in, get what they need and move on with their days.

“It doesn’t matter if wait times in one branch are not noticeably different from any other branch at any other bank, customers who perceive their time is being wasted will develop a negative impression of their bank,” said experts at JRNI, a firm that builds queuing applications for financial services.

Stocks jump most in 6 months as investors swoop on banks

Rising through the police without godfather: The story of Yunusa Ogwuche, retiring CP

Rising through the police without godfather: The story of…