Mobile wireless may be the major driver of internet connectivity in Nigeria, but a new report released in September by GSM Association has shown that the country is not among the top five countries in Africa growing mobile internet infrastructure, adoption, content, and services or affordability in 2018. 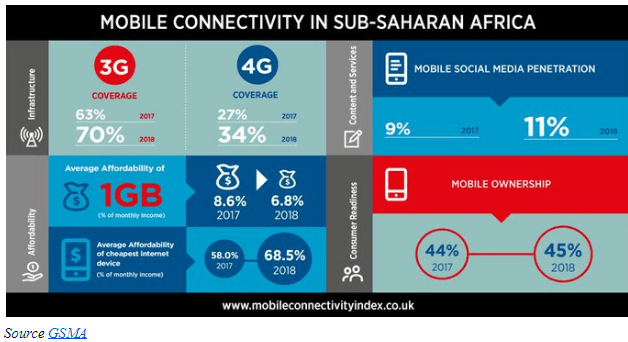 The GSMA report titled ‘Mobile Internet Connectivity 2019: Sub-Saharan Africa Fact Sheet’ revealed that mobile internet adoption currently stands at 24 percent in sub-Saharan Africa. The region is also responsible for 40 percent of the world’s population not covered by a mobile broadband network. In essence, while adoption is happening in sub-Saharan Africa, it is not growing fast enough. This is underlined by the fact that the number of people able to afford 1GB dropped from 8.6 percent in 2017 to 6.8 percent in 2018. Whereas the number of mobile owners grew only by 1 percent, from 44 percent in 2017 to 45 percent in 2018. Mobile data has also become more affordable but it remains above 2 percent of the monthly income threshold for more than 75 percent of countries in the region.

Unlike fixed wireless which comes with the more tedious task of laying physical cables, mobile broadband only requires the deployment of cell towers which enables people to transfer data to their mobile phones, maintaining the internet portable for millions of people. Mobile networks are used for a high volume demanding fairly low bandwidth, focusing on activities like streaming the internet or transferring voice data. Mobile internet is designed to be flexible, hence networks sacrifice speed and latency in patchy coverage.

Nigeria currently has 33 percent mobile broadband penetration which is a far cry from what the country needs to power its digital revolution. Ghana with a population almost six times less than Nigeria has achieved 35 percent broadband penetration and is making better strides than Nigeria – as the GSMA report showed – to grow the number in order to meet global standards.

Interestingly, fixed broadband is capable of delivering many times what the country is currently receiving from mobile wireless, moreover, the technology can deliver faster internet speeds than 4G with lower latency.

For context, a terabyte delivers 1024 gigabytes for a whole month. With that amount of data an individual could get 1 million photos at a size of 10 kilobytes each or stream 600 and 700 hours of HD video, or play online games for more than 12,000 hours, or stream more than 15,000 hours of music or upload or download more than 60,000 hi-res photos.

While Nigeria is dilly-dallying on fixed wireless, many countries around the world are deepening their investment and creating new strategies to reduce the cost of deploying fiber to reach every nook and cranny. In many of these countries, fiber wireless adoption has surpassed mobile internet. Data from the Organisation for Economic Co-operation and Development (OECD), an economic bloc with 36 member countries, showed that fiber, which has reached 26 percent of all fixed broadband subscriptions in countries within the group, is the fastest growing broadband technology, with a growth rate of 13 percent in 2018 and 16 percent in the preceding two years. Overall, fixed broadband subscriptions in OECD countries totaled 418 million as of December 2018, up from 406 million a year earlier and averaged 30.9 subscriptions per 100 inhabitants.

Years of trying to get the government to provide an enabling policy environment and invest in infrastructure that enables carriers to deploy remaining capacity have yielded little results. Stakeholders have over time emphasized that penetration can only increase significantly with massive investment in terrestrial infrastructure, for example, more fiber, more towers, more radio, etc. However, over the last decade, the growth rate in new investments in telecoms infrastructure in Nigeria has slowed almost to a crawl.

The GSMA report only confirms what stakeholders in the telecommunications sector has always known, that the regulators are busy propping their image with surface growth in the sector without really getting involved in addressing the nitty-gritty issues that players face.

An industry stakeholder who would not want to be mentioned told BusinessDay that the solution is, “Let Nigeria identify top hubs, cities like Lagos, Abuja and eight where technology clusters are beginning to grow and attract investors attention and invest in the critical infrastructure.”

At the recent Southern Africa Network Operators Group (SAFNOG) in Johannesburg, stakeholders agreed that there is a need for authorities to go beyond rhetorics and engage local investors to drive up internet penetration on the African continent. The private sector alone will not successfully address problems around the Right of Way, multiple taxations, insecurity, consumer protection violations, and poor road infrastructure.

Similarly, if Nigeria is to make any meaningful progress, the authorities whose responsibility it is to enable companies to provide reliable and affordable internet to Nigerians, would need to roll-up their sleeves and work round-the-clock to move the country forward. Apart from the consumers, the local investors depend on their next steps to know the direction the millions of dollars of investments they have made in fixed wireless assets would go.

How technology can ease ‘Back to School’ rush – Google

Destination Ondo is a response to the obligation to recreate Africa, says Akinboboye