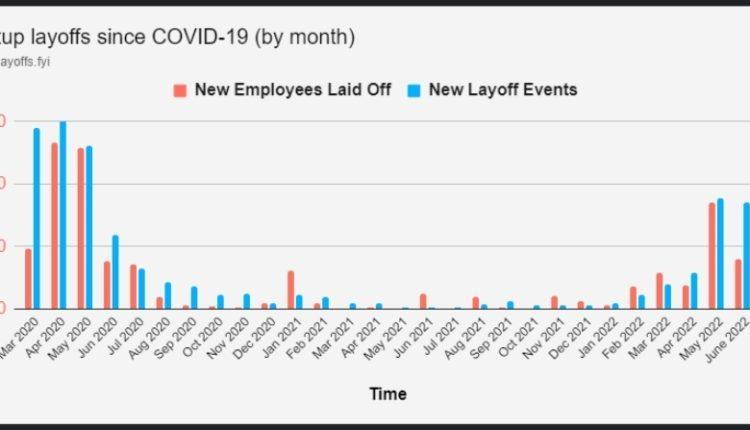 A total of 20,009 tech workers were laid off between May and June 2022 by global technology companies that are grappling with the ongoing economic meltdown.

Data from Layoffs.fyi, a platform that has been tracking all tech startup layoffs since COVID-19 showed that the layoffs in May, which affected 16,985 tech employees across 74 layoff events, were the highest since May 2020, when over 20,000 workers lost their jobs.

While the number of workers laid off in June has dropped by almost half to 8,084, compared to the previous month, the number of tech companies involved is 71 so far.

The layoffs are likely to affect the prospects of Nigerian tech talents leaving the country in droves to take up new positions in some of these tech companies. Also, Nigerian remote workers contracted to these companies may be affected.

So far in 2022, tech companies worldwide have laid off a total of 35,000 workers. Facebook and a few other companies are revising their recruitment strategies. Meta, the parent company of Facebook, informed employees in an internal memo that it is pausing hiring and scaling down some recruitment plans.

“We are regularly re-evaluating our talent pipeline according to our business needs and in light of the expense guidance given for this earnings period, we are slowing its growth accordingly,” a spokesperson for Meta told CNBC.

Apart from Meta, Intel Corp, Microsoft Corp, Uber Technologies, and Lyft Inc are some of the companies slowing down or freeing hires.

The global tech industry is facing what many experts have described as a correction after a record year of venture capital funding. The more than $620 billion raised and the over 500 unicorns minted from the funding activities are now projected as “overly optimistic growth”.

“I don’t think every layoff is preventable. But I think the hubris and overvaluation/funding of the tech industry leads the sector at large to do poor business planning and people’s livelihoods become grist for the mill,” said Amber Naslund, a sales and marketing tech professional.

On Tuesday, Coinbase became the latest to lay off workers when it announced in an email to workers that it was cutting 18 percent of full-time jobs. The global cryptocurrency exchange has nearly 5,000 full-time workers, translating to a head count reduction of around 1,100 workers. The company also said it was rescinding job offers.

“We appear to be entering a recession after a 10+year economic boom,” wrote Brian Armstrong, CEO of Coinbase. “A recession could lead to another crypto winter and could last for an extended period. While it’s hard to predict the economy or the markets, we always plan for the worst so we can operate the business through any environment.”

The crypto market is currently reeling as the price of Bitcoin crashed below $22,000 on Tuesday, its lowest since December 2020. Apart from investors shunning bets on risky assets, the crypto market also took a hit from the crash of Luna and the decision by crypto lending platform Celsius Network to pause withdrawals, citing volatile conditions. The market losses forced big exchanges such as Binance to temporarily suspend bitcoin withdrawals and advised customers to use other networks.

Another exchange, Crypto.com, which was also affected mainly by the market downturn, has sacked 260 people, representing 5 percent of its total workforce. There was also an announcement earlier this month by Gemini Trust Company, the crypto company owned by Cameron and Tyler Winklevoss, that it was laying off 100 people.

Nevertheless, crypto operators like FTX seem unperturbed by the industry challenges. Sam Bankman-Fried, CEO of FTX, noted in a Twitter thread that the crypto exchange will continue growing, onboarding new staff just as it has done on the crypto market’s better days. FTX had slowed down hiring in February. Bankman-Fried said this was not due to a lack of funds but rather to make sure that team members can have enough time to properly mentor new employees before adding more.

“Sometimes, the more you hire, the less you get done,” Bankman-Fried said. He said rapid growth could make it very difficult to keep all staff on the same page.

Beyond crypto, the tech industry slump has sent many companies packing. Layoffs.fyi shows that nine tech companies worldwide have already closed down since 2022. The companies are Fast, Ahead, Halcyon Health, SEND, Subspace, BeyondMinds, Udayy, Kaodim, and Gommet.

As of Wednesday, JOKR became the 10th company to join the shutdown list. An email sent to customers noted that the last day of delivery in New York City and Boston will be June 19.

“While we were able to build an amazing customer base (thank you!!) and lay the US, the company has made the tough decision to exit the market during this period of global economic uncertainty,” JOKR’s email said.

Bill Gurley, the general partner at Benchmark, a venture capital firm, recalled that the current market reset or correction is similar to the one between 2001 and 2009. According to him, the ample speculation that came to characterise the funding approaches of many VCs and created valuations that the industry is unlikely to witness again was driven by unprecedented ultra-low interest rates.

“Similar to 2009, the founders and executives that run VC-backed companies have been quick to recognise and adjust,” Gurley said. “They understand that the cost of capital just went way up and that high cash burn rates are now impossible. The “game on the field” has changed and they are adjusting.”

Iyinoluwa Aboyeji, the founder of Future Africa, a venture capital fund, is optimistic that the downturn will deliver new billion-dollar companies.

“Recessions are the chest sheets for building great companies. It’s much harder to build in plenty because conviction costs more,” he said.