As of 12 am on Saturday, 5 June 2021, Twitter users in Nigeria using any of the four telecom operators, MTN, Globacom, Airtel, and 9Mobile started to experience limited services.

Netblocks, a watchdog organization that monitors cybersecurity and the governance of the internet, also confirmed the restriction of Twitter in Nigeria from the morning of Saturday 5 June 2021. However, people using other internet service providers have reported no issues with their Twitter app. 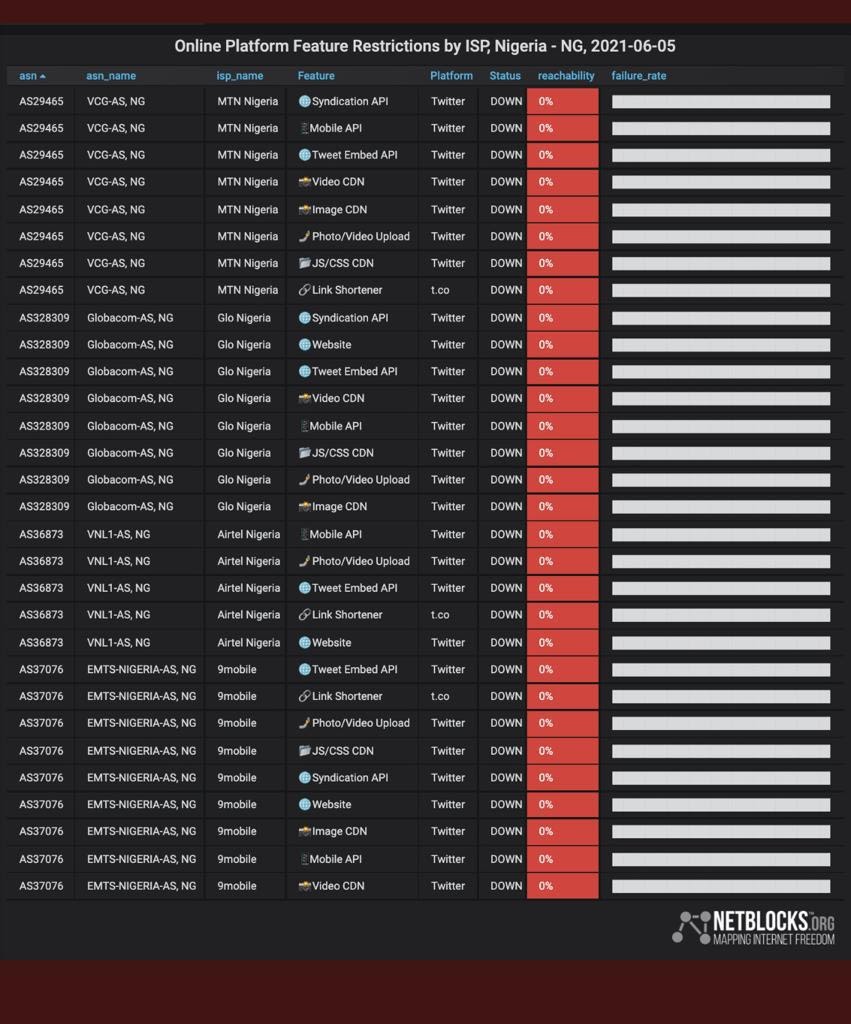 “Metrics indicate that the ban is in partial effect at the time of writing, affecting some but not all internet users in the country. The company’s link-sharing service t.co is also affected,” Netblocks said.

The government’s decision follows the deleting of a tweet made by the President of the country Mohammadu Buhari in which he threatened to punish pro-Biafra groups blamed for escalating attacks on government and security authorities.

“Many of those misbehaving today are too young to be aware of the destruction and loss of lives that occurred during the Biafra war,” Buhari wrote. “Those of us in the fields for 30 months, who went through the war, will treat them in the language they understand.”

To block access to Twitter, the Nigerian government would need to order internet service providers  (ISPs) to limit access to their subscribers. The ISPs in Nigeria include Spectranet, SWIFT, ipNX, Smile Communications, Cobranet, Tizeti, among others. A determined government can threaten to withdraw the licence of any ISP that defies its orders to block the social media network.

However, experts are not in consensus about the legality and the ramifications of the actions of the government.

Joe Abah, a prominent voice on Twitter Nigeria space and country director of DAI International said the ban represents a contraction of the civic space for free speech, dialogue, and debate.

“Where certain users have used the platform to undermine national security, the government has the wherewithal to track them down and sanction them. Reconsider,” he said.

Apart from issuing a ban, the government said it also directed the National Broadcasting Commission (NBC) to immediately commence the process of licensing all OTT and social media operations in Nigeria. The OTT stands for ‘Over the Top’ and refers to any streaming service that delivers content over the internet.

Gbenga Sesan, executive director at Paradigm Initiative said the Presidency may have taken advantage of the closure of courts due to strike action by judicial workers to issue the directive.

According to him, the government would need a court order to carry out the directive. Besides the legal angle, he also says the action further dents how the investment climate in Nigeria is perceived in that the government has the power to order private companies to enforce their wishes.

“This is not just a one-off trend. Nigeria as an investment destination in Africa is affected. There are Nigerian businesses that rely on Twitter to do their business, this affects them too,” Sesan said.

Olushola Teniola, former President of the Association of Telecommunication Companies of Nigeria (ATCON), says there is no ramification for the telecom operators given that Twitter is a social media company that only utilises telecom services to conduct its business.

For him, the government has the power to enforce compliance when it believes it is in the best interest of Nigerians, especially with the security of the state. This is why there are government agencies that verify content and regulate how it is deployed.

“What is new is how the government has decided to react to the deletion of a tweet by the President,” Teniola said.

Samuel Ireke, a legal practitioner and founder of Lawnigeria.com said there was nothing unconstitutional about the government’s reaction to Twitter’s deletion of the President’s message. The right of the President to freedom of speech is enshrined in the constitution just like any other citizen of the country. Hence, what Twitter should have done was to flag the offending tweet instead of deleting it, which potentially violates the President’s rights to free speech.

Nigeria’s retail industry is on promising path of growth – Izuchukwu