Raheem Sterling had scored twice even after Ederson’s early red card but Adama Traore pulled one back and set up Raul Jimenez for the equaliser before Matt Doherty’s late winner.

The thrilling contest was played out amid an intense atmosphere that was only heightened by a series of debatable VAR decisions, not least a twice-taken – and twice saved – penalty by Sterling.

Wolves become the second team to complete a league double against a side managed by Pep Guardiola after Chelsea in 2016-17.

14 – Wolves have won more points from losing positions than any other side in the Premier League this season (14). Character.

2 – Wolves are just the second team to complete a league double against a side managed by Pep Guardiola after Chelsea in 2016-17. Specialists.

20% – Among the 35 managers that Pep Guardiola has faced at least five times in his managerial career, his lowest win ratio is against Nuno Espirito Santo (20% – 1 win in 5 games). Nemesis. 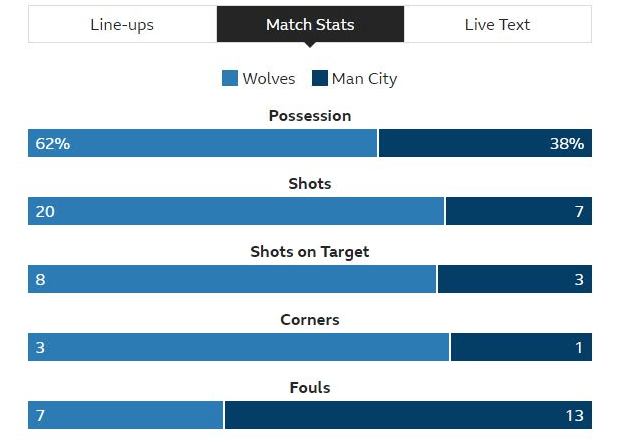 Wolves head to Anfield on Sunday to face Premier League leaders Liverpool. An away fixture at Watford follows, before the Wolves welcome Manchester United to Molineux in the FA Cup 3rd round.

Manchester City welcome Sheffield United and Everton to the Etihad in their next two league fixtures, before Port Vale’s visit in the FA Cup. A Manchester derby follows, as City travel to Old Trafford in the Carabao Cup semi-final first leg.