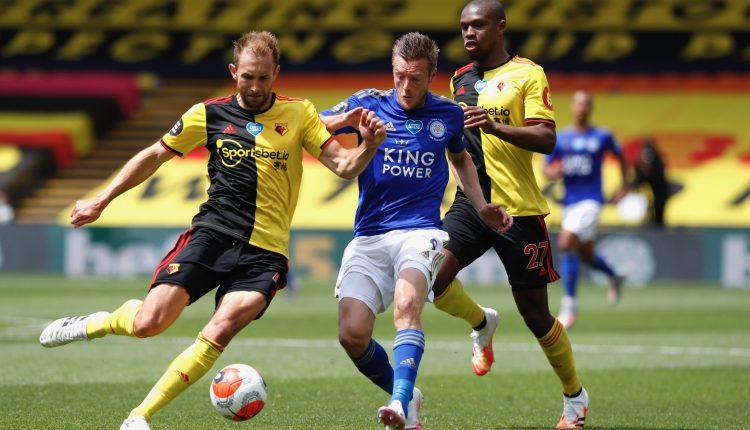 Premier League strugglers Watford rescued a dramatic 1-1 draw against Leicester thanks to Craig Dawson’s last-gasp overhead kick at the start of a weekend which could see Liverpool move within one win of the title.

In the first full weekend of English top-flight matches since the coronavirus shutdown in March, Watford’s hopes of avoiding relegation looked set to be dented by Ben Chilwell’s superb 90th minute strike.

But in a remarkable conclusion, Hornets centre-back Dawson launched himself into an acrobatic effort moments later to claim his first goal for the club.

“It’s something you practise in training and it probably doesn’t go in very often. I’m delighted with my first goal. It was obviously a very important goal and it was good to get a point in the end,” Dawson told BT Sport.

Watford climbed to 16th place, one point above the relegation zone, but they could be passed by West Ham, Bournemouth and Aston Villa depending on their results this weekend.

Leicester remain third, six points ahead of fourth-placed Chelsea, as they look to secure a spot in next season’s Champions League.

With all games being played behind closed doors due to the health crisis, there was the now familiar sight of empty seats being covered over at an eerily quiet Vicarage Road.

Following the trend from the first four matches of the restart this week, a minute’s silence was observed for victims of coronavirus and both teams took a knee in support of the Black Lives Matter cause before kick-off.