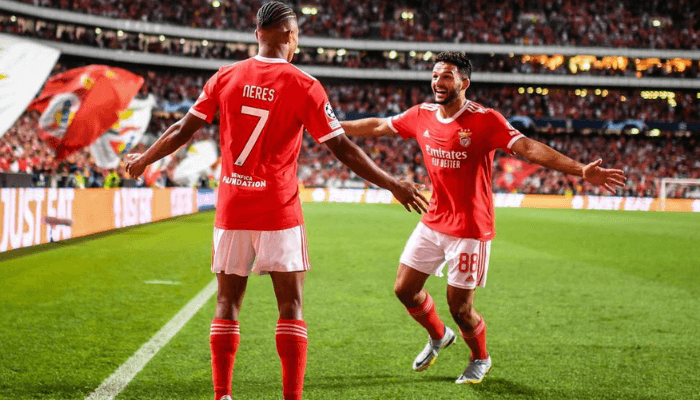 Benfica cruised past a sluggish Dynamo Kyiv in a 3-0 victory with goals from former Manchester City defender Nicolas Otamendi opening the scoring in the 27th minute with a beautiful header from a set piece, Benfica added the second in the 40th minute with a stunning strike from Rafa Silva while they made no mistake to add a third goal in the 42nd minute through David Neres after he was set free with a pass from Goncalo Ramos.

Benfica qualifies for the champions league group stage with 5-0 aggregate after defeating Dynamo Kyiv 2-0 in the first leg.

It was a drought night at Trabzonspor when the Turkish outfit were held to a goalless draw by FC Copenhagen which saw the Danish giants qualify for the Champions League group stage after they held to their first away 2-1 win over Trabzonspor in Denmark.

Ranger survives PSV fangs in the clash of the Scottish giants

Rangers had to dig deep to survive a dangerous PSV team who are under the tutelage of former Manchester United star striker Ruud Van Nisterooy, the PSV team had an impressive away first leg after they held Rangers to a 2-2 draw but failed to capitalize on their last performance when they fell at home to a lone goal from Rangers star striker Antonio Colak after a beautiful defense splitting pass from Malik Tillman.

It was a glorious night for the Rangers who will feature in the 2022/23 Champions league for a second consecutive season.

Maccabi Haifa qualified for the 2022/23 champions league group stage in style after a four goal thriller which was split between both teams when the Israeli giant played Serbia club FK Crvena Zvezda on Tuesday night in Serbia.

Maccabi had to come from two goals down when Crvena took the lead with both goals coming in the first half in 27th minute through Aleksander Pesic while the striker also set up Mirko Ivanic in 43rd minute for the second goal.

Maccabi drew one back when they were awarded a penalty in the 44th minute which Dolev Haziza failed to convert but Daniel Sundgren came to his rescue after the defender scored with a 35 yards drive in 46th minute.

Maccabi champions league dreams were restored in the 90th minute when Crvena player Milan Pavkov turned the ball into his own net which gave Maccabi an overall aggregate lead after they won the first away leg 3-2.

Viktoria Plzen booked their place in the 2022/23 champions league group stage after a 2-1 victory over Azerbaijan outfit Qarabag FK on Tuesday night.

Viktoria Plzen took advantage of home supremacy even though they conceded first when Qarabag took the lead in the 38th minute through Philip Ozobic’s fine strike.

The home team came back strong in the second half and leveled with a stunning drive from Jan Kopic in the 58th minute and later sealed the victory in 73rd minute when Qarabag defence failed to clear their lines and Jan Kilment made no mistake in making them regret it.