Atletico Madrid vs. Barcelona: The stats you need to know

This weekend, football lovers are in for interesting fixtures as Atletico Madrid host champions Barcelona on Sunday, 1st December at the Wanda Metropolitano stadium.

Atletico will be hoping to put behind them, the disappointment of dropping vital points following their 1-1 away draw against Granada last Saturday.

For Barcelona, the game will provide a stern test on their title credentials as they are currently tied on the point as fierce rivals Real Madrid on 28 points but top the league standings on superior goals difference.

Here are key stats to know ahead of the cracker:

Atlético Madrid are winless in their last 18 LaLiga games against Barcelona (D5 L13).

Atlético last won against Barcelona in LaLiga in February 2010 (2-1) under Quique Sánchez Flores, with Pep Guardiola in charge of the Catalan side.

Atlético have drawn 7 of their opening 14 LaLiga games this season, while they have never previously drawn 8 of their first 15 matches in a single season in the top flight.

Barcelona have won 3 of their last 4 away LaLiga games (L1), after being winless in the previous 5 away from home in the competition (D2 L3). 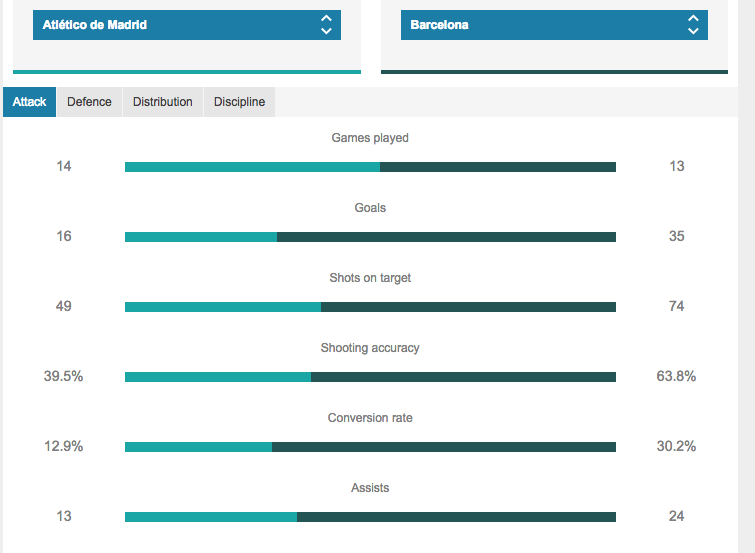 Barcelona’s Lionel Messi has scored 29 goals against Atlético Madrid in all competitions.

Barcelona striker Luis Suárez has been involved in 12 goals in 15 appearances against Atlético Madrid in all competitions (8 goals, 4 assists).

Atlético boss Diego Simeone has only won one of his 25 managerial games against Barcelona in all competitions (D9 L14), while he is winless against them in LaLiga.

After winning three consecutives away LaLiga games against Atlético between 2006 and 2009, Barcelona manger Ernesto Valverde is winless in his last 7 games on the road against Atlético in the competition (D4 L3).