Bitcoin Millionaires and How They Made It

It’s an undisputed fact that bitcoin is the top digital assets across the globe. Bitcoin price is currently sitting around $40,000 and the market cap is currently worth trillions of dollars, and it is the largest digital currency. BTC was created in 2009 by an anonymous person called Satoshi Nakamoto. Bitcoin has since its inception been changing people’s lives, and it has also been changing the concept of money.

When bitcoin was created in 2009, it wasn’t as popular as today. Still, more research exposure makes people adopt this digital asset as an investment opportunity and trading system to buy and sell.

Before we continue, you can find out which to go for – Gold, Stocks or Bitcoin investing?

Major points to note
2009 was the year that Bitcoin came into existence, and it’s currently the number 1 cryptocurrency.
Volatility is constant in the BTC world, and the BTC price can never fixed. It can rise and fall depending on the market forces.

Since BTC was launched and adopted, the price has risen and fallen. But overall, it has been a win situation for every investor that invested right from time and that are still investing.

Here are some of the popular bitcoin investors that have become millionaires through bitcoin and cryptocurrency investments.

Blythe Masters
She is an amazing woman making waves in the crypto world. She once worked as JP Morgan & Co MD. She is now the chief executive officer of Digital Asset Holding. This company is concerned with building tools useful in crypto security, compliance, and processing.

Fastback to 2018, there was a partnership between her company and Google to make coding easier. Aside from bitcoin, her company had ensured people see more importance in the blockchain.

Her company has also raised about 150 million in funding and used it to test its blockchain technology. In many people’s opinion, they believe that she made bitcoin more legitimate to people and improved the way people see bitcoin. 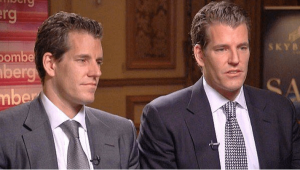 These two brothers (Winklevoss twins) became millionaires from bitcoin. The duos are the first bitcoin billionaires. Reports state that they own about 1 percent of bitcoin and uniquely store their digital assets.

The twin sued Mark Zuckerberg for intellectual property theft. They invested some of their compensations in Bitcoin, investing up to 11 million dollars when the price of Bitcoin was at its low was low.

These twins have been working on how to ensure that institutional investors see the light in bitcoin. They are also giving their best to ensure that traders are making the best out of bitcoin.

This was what prompted the launch of Gemini. It is the maiden exchange platform that’s regulated. You can use Gemini for setting up bitcoin spot prices, futures contracts, and investments. Additionally, they have both contributed to making bitcoin ETF accessible to retail investors, but it hasn’t worked out due to SEC denial.

Roger Ver
The Tokyo based American is one of the earliest evangelists of bitcoin and made a great fortune from heavily investing in bitcoin startups. He was able to make over $500 million through his investment in crypto projects. Ver was fascinated by bitcoin because of the economic freedom from the existing finance system and fiat currencies. He is known as Bitcoin Jesus because of his advocacy for bitcoin.

Dan Morehead
One of the notable names in the Bitcoin world is Dan Morehead because of his role in finding the first-ever investment system for crypto. The name of the company is Panthera and was launched in 2013. Since its inception, different institutional investors have made use of the platform. Over 24,000 percent of returns have been delivered to investors since inception. The investment company has improved a lot in ensuring that coin trading is growing and people can trust the brand more.

Aside from being the founder of Panthera, Dan Morehead is also one of the board members of Bitstamp. Bitstamp is also an exchange platform.
Barry Silbert
This is the founder of the digital currency group. He is also the acquirer of Coindesk. CoinDesk is a top company in crypto development. Over time, the company has ensured that cryptocurrency has positively impacted the global financial system.

He founded his company, which is the digital currency group, and he has been doing the executive work of the company. Since the coin company’s inception, they have helped the cryptocurrency world grow financially and help with blockchain exposure across the globe. His company acquired CoinDesk, which is a top list platform recently.

Aside from acquiring CoinDesk, the company also pumped in money into over a hundred BTC related companies. It is right to say that Barry Silbert’s digital currency group is a top organization of the company, and his nickname cannot be taken away from him. He is popularly called the King of crypto.

Besides owning this digital group agency, he also started a trading firm, genesis, and Grayscale, an investment platform. Grayscale has been attributed to the recent surge of bitcoin price because they invested heavily in 2020.  There are quite a lot of other things that Silbert has done in the crypto world, and he is undisputed the King of Crypto. He started the Bitcoin investment trust, the exchange trading fund was also launched by him, to mention but a few.

Conclusion
There are more bitcoin millionaires in the market. Our list of crypto investors is in no particular order. It’s just a list of hardworking crypto influencers who have made waves in the cryptocurrency world and are still doing more to set a good legacy for people coming behind. As a bitcoin investor trader or developer, always have it in mind that there is no limit to your achievements. Regardless of the current bitcoin price, you can still make a fortune from bitcoin and other low capped altcoins in the market.

The payday revolution is here

Top Reasons to Invest in Grenada