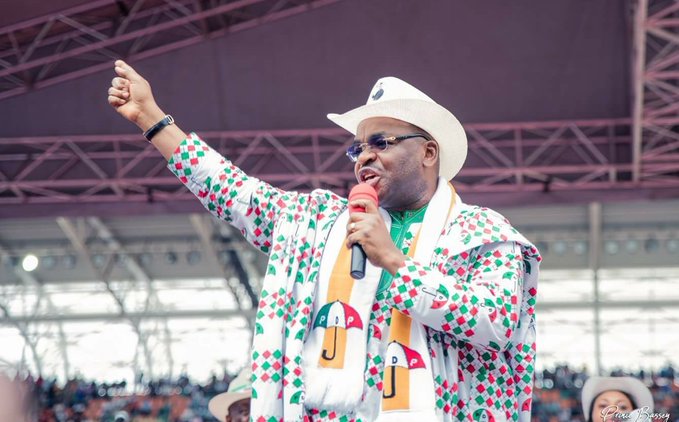 Share
The Peoples Democratic Party (PDP) in Akwa Ibom has elected a new executive committee at its congress held in Uyo, the state capital with Governor Udom Emmanuel demanded loyalty and faithfulness from all members.
The election which had 3,845 delegates with the 39 offices each having sole aspirant saw the re-election of Udo Ekpenyong as chairman, Harrison Ekpo as the state Secretary and  Borono Bassey as the Publicity  Secretary of the party.
Ekpenyong was a  one -time former Political Adviser to former Governor Victor Attah and until his election was the Commissioner for Local Government and Chieftaincy Affairs.
Governor Udom Emmanuel who is the leader of the party while addressing the delegates after the election challenged them to do more for the growth of the state despite describing PDP in the state as a role model of democracy and party politics.
While commending outgoing executives of the party for repositioning the party and ensuring peace and harmony, he maintained that God has always sent men to direct the affairs of human beings adding that the PDP has always secured victory in all elections because the party was led by someone sent by God.
The Governor urged the new chairman to maintain the democratic tradition of the party and remain close to God and be faithful to the ideals of the party.
In his acceptance speech, Ekpenyong who attributed his election to God promised to be focused and determined to consolidate on gains made and take the party to greater heights.
The chairman commended the outgoing SEC for laying a good foundation for the new SEC and promised political inclusion and consultation while giving the party a human face even as he solicited for loyalty from party members.
“Together we make a solemn promise not to let the party down and to work closely with the leader of the party and state Governor, Udom Emmanuel,” He said.
In his valedictory speech, outgoing chairman Paul Ekpo lauded the cooperation of party faithful and said his tenure witnessed the institutionalization of internal democracy within the party and repositioned the party as an instrument for attaining electoral victories.
“We used persuasion to create harmony and peaceful co-existence within, while we wielded the rod against those who sought to divide us through the employment of selfish schemes. The task of constantly maintaining that delicate balance was herculean but it paid off greatly.” Ekpo said.
Earlier in a remark, chairman of the Congress Committee and former Deputy Governor of Abia State, Eric Nwakanma lauded the cooperation and level of organisation in the party in the area and tasked elected officers to give maximum cooperation to the leader of the party and the new chairman in the state.
Share