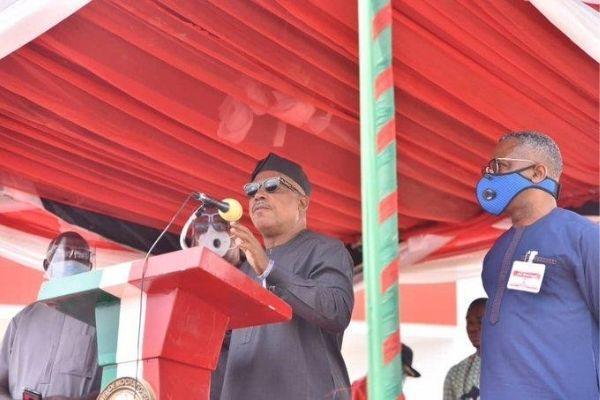 Share
As Nigeria grapples with numerous economic and security challenges, Uche Secondus, the national chairman of the Peoples Democratic Party (PDP) has lamented that the country has lost its direction.
He said with people being killed and murdered on a daily basis, the country is drifting directionless adding that what the country needs is selfless leadership.
Speaking at the inauguration of a new secretariat of the Akwa Ibom State chapter of the party, Secondus blamed the challenges facing the country on poor leadership saying the new party office in Uyo would not have been possible without good leadership.
“The country had no direction, we need prayers, we need a lot of prayers, our people are being killed and murdered on a daily basis plus the coronavirus,” he said
According to him, the country needs to build institutions that would ensure enduring democracy for the youths in the country would take over from the present crop of leaders.
Describing the new secretariat of the Akwa Ibom State chapter of the party as competing with the National Secretariat of the party, he said it was a manifestation of the leadership which he said had rendered selfless service.
“PDP has shown clearly that we have the best governors. Akwa Ibom State and all other PDP States are there for people to confirm,” he said.
While lauding the Akwa Ibom State chapter of the party over the new Secretariat, he said PDP has recovered itself and is becoming stronger adding that anyone can aspire to any position within the party.
In his remarks, Governor Udom Emmanuel commended the past and present leadership of the party which had contributed to the completion of the party Secretariat whose foundation was laid during the previous administration of the state.
He said the office complete was completed through direct labour and hoped that the party would continue to wax stronger.
In his speech, Paul Ekpo, outgoing chairman of the party paid glowing tribute to the Governor as the leader of the party describing him as a man of his words.
Ekpo who has served for two terms hands over to Udo Ekpenyong who was elected as the state party chairman over the weekend.
The inauguration of the party Secretariat is part of activities to usher in a new executive of the party in the state.
Share