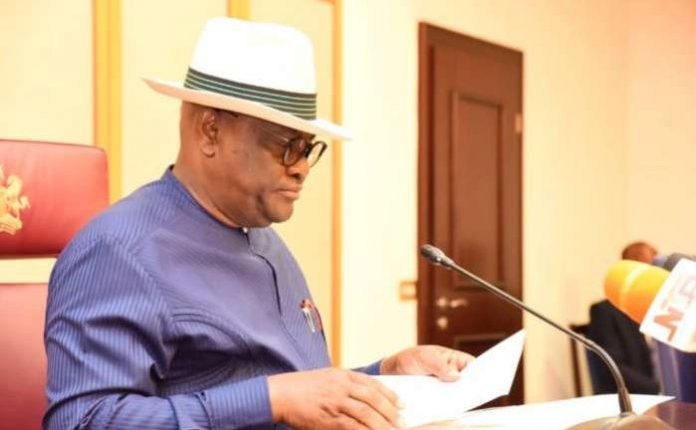 Some eight months after the governor of Bayelsa State visited the Amanyanabo of Kalabari in Rivers State, fireworks have started to fly as Gov Nyesom Wike has issued yellow card to the Amanyanabo.

The developing rift seems to confirm months of speculations that both governors, all Peoples Democratic Party (PDP) lords, are at daggers drawn. The conflict was noticed months ago when Gov Wike began to declare that Soku oil wells were for Rivers State, something that former governor, Chibuike Rotimi Amaechi said and was vilified.

This was followed by claims by some Kula chiefs and elders from Rivers State claiming that they and their oil wells (OML 25) belonged to Bayelsa State. Matters came to a head when the Bayelsa elections came few weeks again and both governors were seen to stand on opposite sides, with Wike siding wherever it was that the Goodluck Jonathan sided. Both governors were in the Jonathan kitchen cabinet from where they flew to become governors for the two sister states eight and five years ago. Dickson has remained sore over the loss to a man backed by Jonathan, and by extension, Wike.

Now, for whatever measure, Gov Wike has fumed over a visit Dickson allegedly made in April 2019 to a Kalabari monarch, the king, Theophilus J.T. Princewill, whose son, Tonye, is a top notch of the opposition All Progressives Congress (APC).

The monarch is said to be on sick bed in Port Harcourt this moment but the Gov has shot arrows his way, threatening to dethrone him if he tried to repeat such act (hosting a governor without clearance).

Wike chose an occasion as auspicious as solidarity visit of Kalabari people midweek at the Government House in Port Harcourt to strike, a sign that he was embittered enough to warrant a solidarity visit.

A Port Harcourt Government House statement signed by the Special Adviser on Electronic Media, Simeon Nwakaudu, described Dickon’s visit as ‘illegal’. The statement said Gov Wike regretted that the Amanyanabo of Kalabari deliberately allowed the Bayelsa State governor to use him to promote divisiveness.

Wike called on Kalabari leaders to prevail on the Amanyanabo of Kalabari, not to allow himself to be used by external forces to create disunity in the State.

He said: “I want to publicly lay a complaint on the action of Amayanabo of Kalabari. The next time it happens, I will act as a Governor. The Amanyanabo of Abonnema didn’t do it, he called me on phone when the Governor of Bayelsa, Dickson tried to create problems in Rivers State.”

Gov Wike said: “That day I would have removed him, but I held myself.  What they would do is to go to Radio and abuse me. But I am use to insults. I am trying to complain to you people. You can see how people are trying to divide a state. A fellow governor would come from somewhere to create Division.”

He said the outgoing Bayelsa State Governor professes love for Ijaw people in Rivers State, but is busy working to take the State’s oil resources in Soku and Kula.

“It is not good for anyone to come and divide Rivers State, because the state is one. It is unfortunate what my colleague did. I have handed him over to God and prayed for God to do his will”, he said.

Son of the monarch, entrepreneur and politician, Tonye Princewill, the producer of 1976 (epic movie), wondered if the governor spoke from a clear mind. “I’m here by the King’s hospital bed in Port Harcourt where he has been for almost a week now. So, you can see why my priority is not responding to Wike. The King will be 90 in a few days, so if a small boy speaks, his superiors do not always have to answer him.

“Yes, I have heard what he said and I saw the video. I watched it well. It appears that he doesn’t understand that everything is not politics. I think we should pray for him and put him in God’s hands. I will be doing it daily. At the appropriate time, he will feel my response.”

Fireworks by media and security experts

Reacting, a man who served for decades in Rivers Government House and versed in protocol management of dignitaries, Blessing Nwikina, said it is is a breach of protocol for a governor to visit another state for a public or official function without informing the host governor.

“It shows disrespect, and the visiting governor should tender an apology over that breech.

For one thing, the advance party of the visiting governor should have made protocol contacts with the Protocol Department of the host state, even without directives of their principal. That’s official decency. I think Gov Wike deserves an apology from Gov Dickson, for purposes of protocol tidiness”.

To buttress his argument, he recalled two prominent incidents in the past. When Orji Uzor Kalu as the governor of Abia State during the Peter Odili era drove into the Liberation Stadium to watch his team, Enyimba, play with Sharks. He said he was in the stadium and noticed the presence of a governor without the knowledge of the home governor. He said he quickly notified the chief of staff in the Rivers Government House who contacted the governor and immediately, protocol attaches were dispatched to keep Kalu company while the deputy governor was dispatched to go stay with the visiting governor.

Nwikina said Kalu had to apologise when he noticed he had erred.

The next was when former head of state, Ibrahim Babangida allegedly came to attend the wedding ceremony of one of the daughters of the Alabo, Tonye Graham-Daouglas, then a minister. The state government was notified that a minister was to come and sent a protocol team to welcome and chauffeur him about.

He was it was at the airport that Babangida emerged from the plane and alert was sent to Government House that a former president was at the airport looking for a vehicle to bring him down. He said the governor gave orders and the protocol team was asked to switch attention to the former president. He said they brought him to the wedding and remained with him while Odili moved down to stay with him. He said Babangida realized his mistake and apologized. Another protocol team was dispatched to minister to the Minister. He said every dignitary that realized his mistake always apologises.

The APC spokesman reacted immediately on facebook, asking why Gov Wike did not confront his contemporary, Dickson, if the breach was gubernatorial. “Why nurse what happened since April? He’s playing this one up now because he and Dickson disagreed over Bayelsa governorship. Did he or the Amanyanabo of Abonnema apologise to then Gov. Amaechi? Is the standard no more to go to equity with clean hands?

Many recalled that Wike as minister did worse to Amaechi as governor, and wondered why it is now an offence.

A security expert and one time police public relation office who retired as an assistant commissioner of police, Mike Uche Chukwuma, said; “Sometimes I laugh when some people just make statements without looking at the two sides of the issue in question. As a Chief Security Officer of a State, an institution, or organisation, can you overlook such a security issue? Should anything have happened to the dignitary who entered without any reference to you, where will be the first port of the investigation? This matter borders purely on security as against the political, sentimental, and or ethnic coloration some people are trying to paint it.

Efforts to get the Bayelsa State government house to respond to deteriorating scandal proved fruitless all Thursday evening.

Amaechi always under fire at home, but…

Nigeria must address impunity, electoral violence to save democracy – CACOL