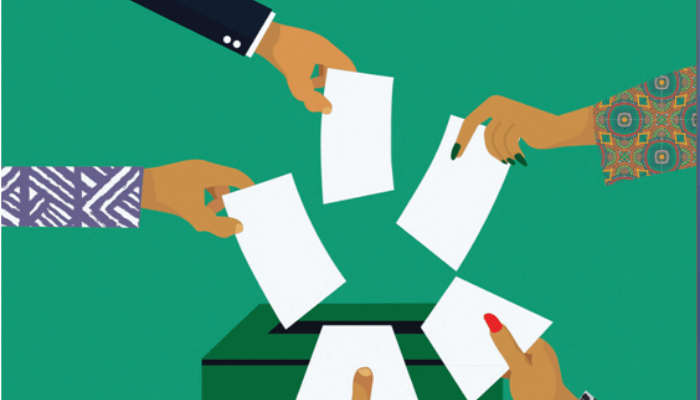 By law, every citizen of Nigeria who has attained 18 years old of age has the right to vote and be voted for during elections. This is a political right guaranteed by the Constitution.

To discourage registration by persons who do not meet the requirements, double registration, and to make the identification of voters seamless, the Independent National Electoral Commission (INEC) introduced the Permanent Voter’s Card (PVC) in 2011 and the final specimen was approved in 2012.

Prior to this, from the 1959 federal elections when the first Electoral Commission was placed in charge of elections, the voting process was largely conducted manually. Registration for voting, the exhibition of the voters’ register, voting, vote counting and publication of results were carried out without the use of technology. Votes cast were counted one by one. Scannable forms, pencils, and indelible inks were some of the materials used to aid the voting process. The manual process posed a lot of challenges to voters registering in more than one polling unit with no way of verification, and voters voting more than once, which made it difficult for elections to be credible.

The PVC is a chip-based card which contains the information of a voter including name, age, occupation, residential address, photograph and thumbprint of the holder.

With the introduction of the PVCs, votes are first accredited through biometrics and verified on an electronic system before a potential voter is allowed to vote. The introduction of the PVCs did not totally cure all the ills of manual balloting as vote counting was still done manually. Also, the automated fingerprint identification system, which was used in the 2011 general elections, succeeded in eliminating multiple registrations from the voter list but was not capable of verifying the identity of voters at the polling stations. Now ahead of the 2023 elections there are newer technologies, however, the accreditation process became better than it was and to a large extent was able to secure one vote per voter.

Following its introduction, INEC via its voter education portal decreed that “the PVC enables registered voters to exercise their civic right to vote in the General Elections”. Thus, an eligible and even registered voter cannot vote if he/she is not in possession of the card. As such the importance of having the PVC for the upcoming elections cannot be overemphasized.

However, as necessary as this document is, there are reports on both sides – the electorate and INEC – that many PVCs are yet to be collected. On its part, the INEC has decried the high number of uncollected PVCs in some states in Nigeria. On the other side, observers which include persons who have registered have said that the INEC has not made PVCs available for collection despite their frequenting the INEC offices where they are registered. Furthermore, INEC reports that in addition to the PVCs that are yet to be collected, it is still printing PVCs for those that have registered.

INEC’s constitutional obligation to ensure free and fair elections
Section 153 of the Constitution establishes the INEC. Paragraphs 14 and 15 of Part 1 of the Third Schedule to the Constitution empowers the INEC to organise, undertake and supervise all elections to all elective positions in the country. The Commission is also charged with monitoring the organisation and operations of political parties, conducting registration of persons qualified to vote, and preparing, maintaining and revising the register for the purpose of any election.

Section 78 of the Constitution gives the INEC the power to direct and supervise the registration of voters and the conduct of elections. Furthermore, Section 16 of the Electoral Act 2022 provides that the INEC shall design, cause to be printed and control the issuance of voters’ cards to voters whose names appear in the voters’ register.

The Constitution states three requirements for eligibility to vote in an election – citizenship, age and residency. Sections 77 (2) and 117 (2) of the 1999 Constitution are to the effect that every citizen of Nigeria, who has attained the age of eighteen years residing in Nigeria at the time of the registration of voters for purposes of election to a legislative house, shall be entitled to be registered as a voter for that election.

In addition to these constitutional requirements, section 12 of the Electoral Act provides that only a person who presents himself to the registration officers of the INEC for registration as a voter and is not subject to any legal incapacity to vote under any law, rule or regulations in force in Nigeria, can vote during elections.

Thus, once a person meets the conditions of eligibility, and presents themselves for registration at INEC designated offices, said person is, after registration, entitled to a PVC which will serve as a sort of passport to vote during the elections.

Ultimately then, a combined reading of these provisions is to the effect that INEC’s duty is to, through diligent attention to all the steps and the discharge of its duties to all stakeholders in the electoral process ensure credible elections in Nigeria. Consequently, there is a duty imposed on the INEC to ensure, on its part, that the level of disenfranchisement is reduced to the barest minimum. It is only when these pre-election matters have been appropriately handled, that we can say that the groundwork has been laid for fair and credible elections to be conducted.

How Disenfranchisement can affect the outcome of the elections

Varying reports by several sources abound. According to one source, on June 22, 2022, Mr Olusegun Agbajse, the Resident Electoral Commissioner at a news conference, “Youth Vote Count” said, “Already we have about 34,000 new PVCs for those who registered between June 2021 and December 2021… but it is very disturbing that since April this year when we brought out these cards for people to collect …only 3,000 PVCs have been collected by their owners.”

Still in June, another source reported that Mr Olusegun Agbajse, the Lagos state Resident Electoral Commissioner said, “only 6,382 PVCs out of 34, 242 received from the Commission’s headquarters for the first and second quarters of Continuous Voters Registration were collected by their owners.” The same source reported in September that of the 34,242 new PVCs available, 21, 352 are uncollected, meaning, about 12,900 new PVCs were collected, making an increase of 6,518 in 3 months

On October 31st, another source reported that INEC’s Public Affairs Officer in Lagos, Mrs Adenike Oriowo told the News Agency of Nigeria that “The new PVCs received from INEC earlier this year were 60,370 while only 22,538 were collected as of October 21st. Total uncollected new PVCs as of October 21 were 37,832.”

The question then is, at this rate of production, will sufficient PVCs be available for collection by the registered voters? Using the information for Lagos state as a touchstone, there are 585,629 newly registered voters in Lagos, and as of October 21st, only 60,370 new cards have been received by the INEC’s receiving office in Lagos. Using the average production rate of 6,532 PVCs per month, only 19, 596 PVCs are likely to be produced by January 31st 2022. This leaves over 500 thousand newly registered voters without the option of a PVC a few days to the elections.

Assuming that these numbers are reflective of other states and geo-political zones, the turnout at the elections are unlikely to be a true reflection of the electoral will.
Furthermore, a July 2022 report by SBM Intelligence records that for the respondents to be successful in collecting their PVCs, only 23 per cent of them were successful in their first attempt followed by 37 per cent who were successful twice, 20 per cent were able to collect theirs after the third try and eight per cent of them were successful after four attempts.
While there is no express stipulation by the law that INEC is supposed to ensure that all PVCs are collected, INEC has the fundamental function of directing the elections as an independent body which could bring about credible elections, and ensuring that it has properly discharged its duties from registration to production to collection of PVCs is key to setting the groundwork for free and credible elections.

It is true that INEC cannot totally extinguish political apathy, nor is it required to, but they have the duty to ensure that person who are willing to vote are not disenfranchised because of its inability to provide PVCs given that it is one of the basic requirements to vote in the elections.