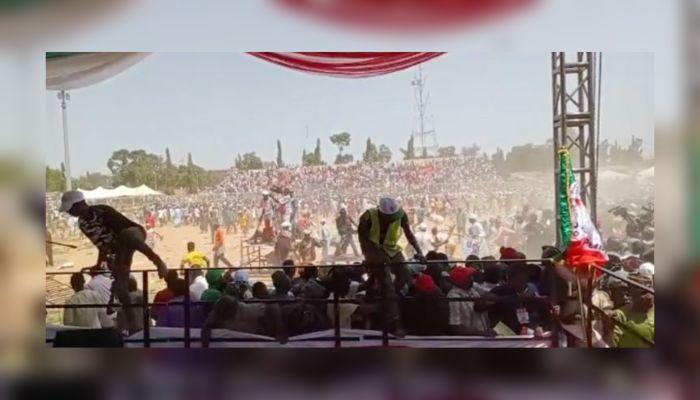 A series of recent attacks on its facilities and the spate of fake news are major headaches facing the Independent National Electoral Commission (INEC) ahead of the 2023 general election, which is 80 days away.

Several INEC offices have been attacked in recent months, with many ballot boxes, voting cubicles, and permanent voter cards, among others destroyed.

“The persistent attacks on our facilities nationwide is a big source of concern; damage to physical infrastructure, election materials, and the threat to the safety and security of our personnel worry us a lot,” Mahmood Yakubu, chairman of INEC, said on Friday at a strategic interactive meeting with line editors in Lagos.

In the last four months, five of the commission’s LGA offices were attacked, comprising two in Enugu and one each in Ogun, Osun, and Ebonyi, he said.

He said: “And they don’t appear to be isolated cases; apparently, they were targeted. In spite of the financial challenges that we are facing, we try as much as possible to renovate these LGA offices and we have 774 of them nationwide. So, the resources available may not be adequate for us to renovate all of them at a time.

Yakubu appealed to the security agencies, community leaders, and all well-meaning Nigerians to join the commission, “so that we don’t create the impression that saboteurs and arsonists can go scot-free in our country.”

He also expressed concern over some campaign activities of political parties and their supporters, which he described as a bad omen.

“We have seen a lot of negative mobilisation and even violence,” he said. “As at November 9, barely two months into the five-month campaign period, we tracked 52 incidents involving the use of abusive, inciting language; denial of access to public facilities to opposition parties for their campaigns; destruction of campaign materials; and even physical attacks resulting in fatalities.

Yakubu recalled saying at a recent emergency meeting with the security agencies that a peaceful campaign heralds a peaceful election.

Read also: Why we are keeping election materials in CBN after weighing four options – INEC

“I am glad that immediately after the meeting, the inspector general of police invited the leaders of political parties, as agreed at the meeting, and addressed them. But we also agreed that beyond appealing to them to be of good behaviour, what is paramount is enforcement of the laws against violations,” he said.

He said hate or incendiary speech or any form of violence must be seen to be apprehended and prosecuted as provided by law.

The INEC boss appealed to the media for their continued cooperation and support to tackle the menace of misinformation, disinformation and fake news.

He said: “Often, the intention of the purveyors of such news is to impugn the credibility of the election management body or its officials or to delegitimise elections.

“The media has a big role to play. For our part, we will continue to be open and transparent; INEC does not believe in censorship. We have said consistently that the best antidote to fake news is greater openness and transparency.”

Yakubu said there was an online report that quoted the chairman of the Economic and Financial Crimes Commission (EFCC) as saying something at the meeting of resident electoral commissioners in Lagos on Thursday, even though the EFCC boss was neither at the event nor invited.

He also cited a news report that said a court of law ordered the commission to resume voter registration.

“So, we will continue to partner with you in countering this mischievous misinformation, disinformation, and fake news,” he told the editors.

Labour Party growing popularity in the north, is unsettling the APC and the PDP —…