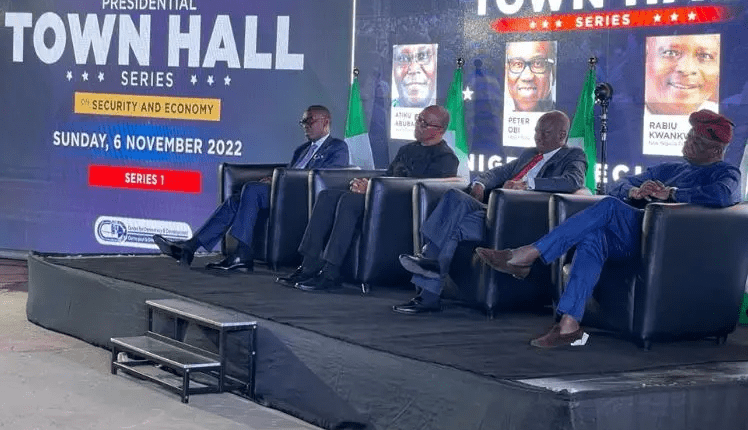 “We don’t want vice presidential candidate,” a group of angry participants said at the Arise TV Presidential Town Hall meeting series on Security & Economy held in Lagos. A response that was forced out of them when they found out that Atiku Abubakar of the Peoples Democratic Party (PDP) was absent and represented only by his running mate-Governor Ifeanyi Okowa.

“We only want a presidential candidate,” they voiced out even louder, to the disgust and utter rejection of some of the campaign officers of the PDP, especially Dino Melaye, who was in the audience section of the hall.

Read also: We will work for Atiku’s victory in Oyo-Akinjide

The town hall meeting, organised by Arise TV and the Centre for Democracy and Development (CDD) on Sunday, had the objective of providing an opportunity for some of the leading political parties whose candidates are aiming to take over from President Muhammadu Buhari come May 2023 to speak to Nigerians. In attendance were Peter Obi of the Labour Party, Rabiu Kwankwanso of the New Nigerian Political Party (NNPP), Ifeanyi Okowa of the People Democratic Party (PDP), and Kola Abiola of the Peoples Redemption Party, with the APC noticeably absent.

The town hall meeting was to be attended only by the presidential candidates of the leading political parties, which many believe could give us the next president come 2023.

However, many people, especially those guests in attendance, were disappointed by the complete disregard shown by Atiku Abubakar of the PDP, from whom many had hoped to hear about his plans for the country. Many had hoped that it would give them a good opportunity to assess his plans for the country and see if he is the right fit to rescue it from the challenges it faces. Their grievances were fueled by the fact that he was represented by his running mate, Governor Ifeanyi Okowa of Delta State.

A video of some of the guests captured by @KnightSirdam was trending on Twitter with more than 1,250 retweets and 2,021 likes. In the video, some guests could be heard shouting, “Only presidential candidates! We don’t want second fiddle. That’s what we want. We are Nigerians, and we will not accept it.”

However, Okowa, responding to the demands of protesters, said that Abubakar obtained permission from the organisers to be absent from the meeting and that the meeting was not a debate but just a forum to interface with a selected audience.

“Atiku Abubakar duly obtained permission from the organisers of the town hall meeting for him to be represented, and that permission was duly given. Atiku Abubakar is outside the country, and he has asked me to represent him.

“I think that answers the question to earlier concerns raised. This is just a town hall meeting, not the actual debate,” he said.

The People have woken up, if you are not ready to speak to Nigerians, you have no business contesting. @TheSerahIbrahim pic.twitter.com/epQCJy2LnX