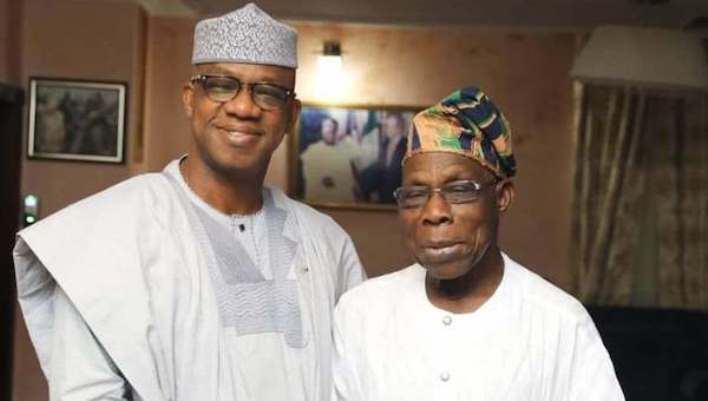 Former President Olusegun Obasanjo, on Sunday, paid a condolence visit to the Ogun State Governor, Dapo Abiodun, over the death of his father, Pa Emmanuel Abiodun.

Obasanjo, who visited the governor at the Iperu-Remo Family House of the governor, called on the people to take a lesson from the death of Pa Abiodun, noting everyone will answer the call one day no matter how long.

The former President said he had come on the condolence visit to share in the grief of missing a loved one.

“The lesson from this is that one day we will be no more. It does not matter how long we live, but how we lived. What will people say about you? Baba lived a life of service to his community, God and his family.

“I have come to share in the grief of missing a loved one. It does not matter how old, we still miss them. Baba has done his best and has gone to be with his Creator.

“On behalf of myself and my wife, we really want to share with you, the grief of the demise of your father. May his soul rest in perfect peace. From what we have heard and what we know of Baba, we can testify that Baba gave his life to serve. He gave his life for service of his family, his community, his country and to God.”

Obasanjo, however, urged the governor and other members of the family to take condolence in the fact that Pa Abiodun lived an impactful live, whose evidences abound for all to see.

Responding, Abiodun thanked the former president for the visit, declaring Nigeria could not afford to lose him, saying “you still have a lot to offer the nation and humanity”.

He further described Obasanjo as an asset which should be exploited to the fullest.

He disclosed that the former President who has been his father over the years, would now step in as his father.

“Baba, you are going no where. Baba, by the grace of God, you will live longer. We can not afford your going now. You have been my father over the years, but, now that my biological father has gone to meet with the Saints, you have to step up now to be my father”, Abiodun stated.

The governor, who described his father as humble, God fearing, disciplined and focused man, stressed that he lived for his family and community.

“My father taught at different levels of education. Education was his first love and teaching his ministry. He was disciplined and focused. He used his profession to affect lives positively. We will miss him.

“I learnt humility from my father because he always believed that life is transient and we must impact positively on others”, Abiodun submitted.