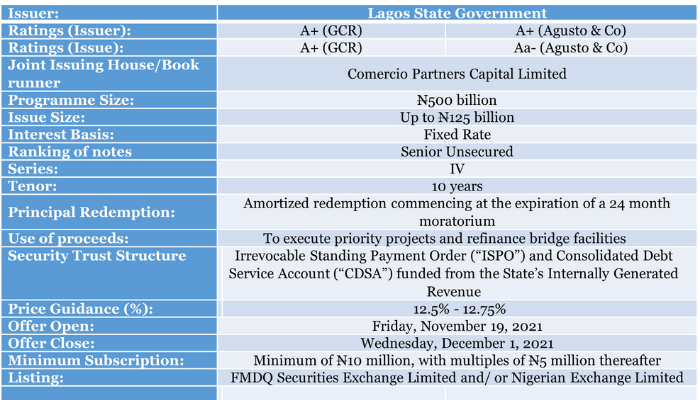 Announced by the Joint Issuing House, Comercio Partners Capital Limited, the offer by the Government of the busiest city in Africa will close by Wednesday, December 1 2021.

The proceeds from the issued Bond will be channelled to executing priority projects and refinancing bridge facilities in the city with the most population in Africa.

While the fixed couple rate was not disclosed Comercio Partners set the price guidance at between 12.5 percent to 12.75 percent. Investors are allowed to subscribe with a minimum of N10 million, with a multiple of N5 million thereafter.

Agusto & Co. assigned an “A+” rating to Lagos State Government on account of the State’s resilient financial condition and strong capacity to meet local currency obligations on time from its internally generated revenue (IGR) and share of centrally collected revenue.

In a statement notifying the investment public of the offer by the Lagos State Government, Comercio Partners said Lagos State is a Category A State among the state governments in Nigeria.

“Lagos State is the most developed State in Nigeria and is exalted as the country’s economic and commercial hub, accounting for more than 25% of Nigeria’s GDP,” it said.

According to the statement by the Joint Issuing House, Lagos is a top 5 economy in Africa and continues to attract a wide range of regional and global businesses.

“Underpinning the State’s strong economy is its robust internally generated revenue (“IGR”) which continues to grow year-on-year and remains resilient despite macroeconomic headwinds and disruptions caused by the global pandemic. The State’s IGR accounts for c.65 percent of its revenue,” it said. 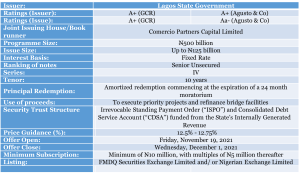 With a massive consumer market, Nigeria’s busiest city which is home to most of Nigeria’s over 500 active start-ups, continues to access the domestic debt capital markets and has been successful due to the strong support garnered over the last thirteen (13) years from the investor community.

“The State has been able to access much needed complementary funding, which augments the State’s revenues and provides the critical support required to accelerate and actualize the provision of physical and social infrastructure/amenities, thus improving the overall living standards of residents in the State,” Comercio Partners said, adding that proceeds of the new issuance will enable the state to further accelerate the development of physical and social infrastructure in the State.

On its own, Lagos would rank as Africa’s seventh-largest economy. Known for its traffic gridlock and entrepreneurial dynamism, Lagos alone is responsible for about 30 percent of Nigeria’s GDP. If Lagos was a country, its economy which is worth over $136-billion would not only be the seventh-largest in Africa, it would be ahead of Cote D’Ivoire and Kenya.

Despite the adverse impact of the Covid-19 pandemic which culminated in a recession in Nigeria, the credit rating agency said Lagos’s topline performance remained resilient as total revenue (including grants and donations related to the Covid-19 pandemic) rose marginally by 2 percent to N658.5 billion in 2020 with further signs of growth in 2021.

“Although the civil unrest “EndSARS” which occurred in October 2020 resulted in the destruction of properties and loss of lives in various parts of Nigeria and Lagos in particular, we note that the State has made strategic investments in security and general infrastructure facelift to restore public confidence and favourable operating environment for businesses and households,’ research analysts at Agusto & Co. said, adding that they “retain our opinion that Lagos State remains one of the most strategic and economically viable states in the country that can function independently of the share of centrally distributed funds.”

Overall, Agusto & Co. notes positively the elasticity in Lagos State’s revenue profile and expects further improvement in the near term premised on the continued reopening of the global economy, increased commercial activities in the State as well as the ongoing Covid-19 vaccination roll-out success.

In the six months ended 30 June 2021, Lagos State reported total revenue (including grants) of N360.5 billion and Agusto & Co forecasted a total revenue to close at about N706 Billion by the end of 2021(representing an 11% growth from the prior year), with IGR accounting for 74 percent, while VAT and SA receipts will represent 20 percent and 6 percent respectively. In its opinion, Lagos State’s revenue profile is stable and sustainable.

The following are things to know about the N125 billion bond issuance by Lagos state.

The Series IV Bond obligations, according to the Lagos State Government will be serviced from the Consolidated Debt Service Account (“CDSA”) and an Irrevocable Standing Payment Order (“ISPO”). It stated that it will appropriate the sum of N495.64 million from the CDSA, immediately upon the issuance of the Series IV Bond for purposes of the repayment of the interest obligations under the Bond.

The Bonds will be governed by and construed following the laws of the Federal Republic of Nigeria.

The Series IV Bonds are callable at par after five years, on any interest payment date, following the 60th month; subject to the Issuer having obtained prior regulatory approval and upon issuance of the requisite notice to Bondholders, a notice by the issuing houses said.