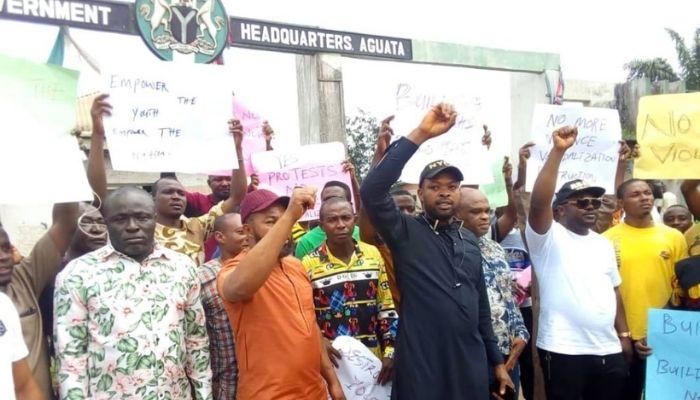 Youths under the aegis of ‘Youth Volunteer’ in Anambra State have declared war on touting and ‘criminal terrorising’, vowing to fight to restore peace and sanity in the state.

Chukwuma Okpalaezeukwu, the leader of the group in Onitsha, the commercial hub of the state, on Wednesday, said they would focus on traffic surveillance and monitoring of criminal activities.

He said they would assist the government and security agencies to sanitise every corner and get rid of the touts terrorising the state.

According to him, the youths decided to respond to Governor Charles Soludo’s inaugural pronouncement to rid Anambra of touts and other criminal elements.

Okpalaezeukwu said that they were also out to support the enforcement order of Echeng Eworo Echeng, the commissioner of police in the state.

“We the Anambra Youths Volunteers hereby declare our resolve to assist the state government and the security agencies in checking these youth-prone excesses.

“We will end all criminal activities. No more snatching of handbags, phones and personal belongings of innocent citizens. We are going to assist and ensure that peace, law and order are restored in the state,” he said.

Okpalaezeukwu also admonished youths engaging in touting and other unlawful activities to desist, noting that the group would use the Mobile Courts established by the new administration to deal with any hoodlum caught causing trouble in any form.

He further said that the group was determined to help rehabilitate, rebrand and reintegrate youths who had resorted to touting, criminal activities and other social vices as means of survival in the state.

Meanwhile, commercial drivers, particularly tricyclists in Awka, the state capital, have lamented the continued extortion by touts in spite of the ban recently pronounced by the new government of the state.

Our survey in various parks in Awka showed that touts still collect money from drivers.

At UNIZIK temporary site where tricyclists load to Okpuno, Mgbakwu, Ngozi Estate among others; it was observed that every tricyclist was levied N50.

A tricyclist, who identified himself as Chiboy for security reasons, lamented that despite the ban and the awareness created about it, touting is still a big business.

“Even this morning, we were all in this park when a public service announcer passed here and created awareness about the ban and also warned that we shouldn’t give any tout or revenue agent money anymore because Soludo has banned that. And these touts were all here when the announcement was made.

The story was not too different at Amawbia Park, where two touts were also sighted, with one holding a marker, while another held fat bundle of money and still chasing after loaded and departing tricycles to collect N100 each from them.

After a short while, a tricyclist was seen at a nearby shop shouting “Final, No more.”

“Soludo Solution done come! Make I see how I go continue dey make others rich with my sweat and remain poor as Keke driver.”

While saying these, he was also holding a burning paper suspected to be one of the daily tickets usually sold to them at the park.

The tricyclist confirmed the burnt paper was a ticket tout used to sell to them, but revealed that the era of tickets has ended, as no one sells tickets to them anymore at the park.

“That time, before you go carry a passenger from this park to Amawbia and come back, you go done pay like N550, all in the name of tickets, loading fee, park fee and other things.”

“But, today, all those things have a thing of the past because the new government has chased the touts away. It’s only N100 I now pay at the park each time I load.

It was, however, observed that shuttle buses who load at the park also pay a certain amount of money to another group of touts, ranging from N100 and above depending on the destinations of the passengers the operator is carrying.

One of the shuttle drivers also testified that they were paying much more than that amount in the past, but for the new policy.

At Aroma Junction, the story was worse, as interviews with tricyclists show that nothing has changed from what was previously obtainable.

A tricyclist, who plies Aroma-Ifite route revealed that each tricyclist pays a total of N700 daily, the breakdown of which he gave as follows: N400 paid to the Keke union task force; N100 to Ozone, N100 for the opposition, and N100 paid at Book Foundation.

He disclosed that their union chairman recently resigned and advised those under him to cease collecting levies and other revenue henceforth, but despite that, the defiant task force operatives still come out daily to collect levies.

A commercial bus driver, John Odoh, who plies from Onitsha to Awka said they still give out money to illegal agents.

“They hide by the corner to avoid arrest and threaten to deal with us if we refused. They tell us to go and inform the governor who gave the order, he said.”

Recall that the Anambra State CP Echeng Echeng, on Sunday, gave a marching order to the heads of tactical units, divisional police officers (DPOs) and heads of departments (HODs) across the state police command to ensure strict and immediate enforcement of the band on touting and cash collection of revenue in the state, which was declared by the newly sworn-in Governor of Anambra State, Chukwuma Soludo.