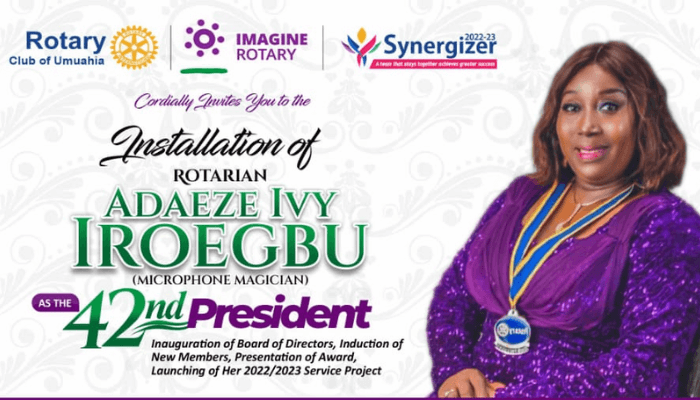 Adaeze Ivy Iroegbu, a renowned broadcaster with Broadcasting Corporation of Abia State (BCA) has been installed as the 42 President of Rotary Club of Umuahia for the 2022/2023 Rotary year.

By her installation, she has now become the 2nd female to occupy the exalted position of Rotary club of Umuahia.

In speech, during the ceremony at Michael Okpara Auditorium, Umuahia, the outgone president, Ugochukwu Ajawara disclosed that the basic charge of the club is charity to the physically challenged persons, the indigents and others in the society.

Ajawara disclosed that club embarked on tree planting exercise which part of the ways to keep Abia clean.

He further said the club planted 38 trees at BCA, Umuahia and equally embarked on environmental sanitation exercise in Umuahia, sent medical consumables to Arochukwu General Hospital among other activities of the club during his tenure.

In her acceptance speech, the new President, Adaeze Iroegbu expressed her joy for the honour done her.

She said that she felt great because a great platform has been created.

She disclosed that projects of the club were capital intensive adding that she would continue to build club on the foundation already laid by her predecessors.