Ten most rated Nigerian movies on Netflix in 2021

Netflix, a service for streaming movies and TV shows, has now become one of the world’s leading online entertainment platforms. Today, Netflix has over 151 million paying subscribers in more than 190 countries.

BusinessDay examines the top ten best movies available on the streaming service. Some of the films were released in previous years, but they made their platform debut on Netflix in 2021.

We note here that some of the movies on this list were released on Netflix before the date of the first weekly rankings so for this list, we ranked the movies based on high acclaims by a broad cross-section of the best critic websites and social pages, and the number of times these movies have appeared on the top ten ranking on the Netflix top 10 website. 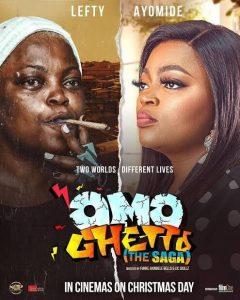 Omo Ghetto: The Saga debuted on Netflix, on 10 September 2021 after getting its theatrical release back in 2020. The two-hour-long movie broke records in the Nollywood entertainment industry in Nigeria and we can totally understand why.

Directed by Funke Akindele and JJC Skillz, this movie serves as a sequel to the 2010 Omo Ghetto. The movie depicts elements of sisterhood, love and takes us on a laughter ride right from the first scene of the police officer chasing a kid through the streets.

The movie was on the top 10 most viewed movies for 10 consecutive weeks which is testament to its theatrical success of being the highest-grossing Nollywood film with over N635 million.

The movie stars Funke Akindele-Bello in a dual role as Lefty and Ayomide, who are twin sisters living polar opposite lifestyles. On one hand, Ayomide is peaceful and sophisticated in her ways, on the other we find Lefty being brash and thug-life in her endeavors.

Alongside Lefty, we have actors Eniola Badmus as Busty, Chioma Akpotha as Chummy Choko, and Bimbo Thomas as Nikky playing the roles of Lefty’s friends who always seem to find their way into troublesome situations. Another central character who plays a role in evolving the movie from a comedy to a drama is Femi Stone played by Deyemi Okanlawon, who is our brutal protagonist Lefty’s love interest.

2. King of Boys – The return of the king 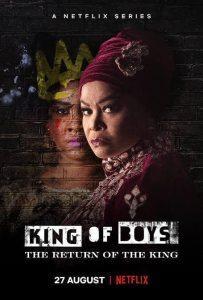 After much anticipation, the highly-anticipated King of Boys: The Return of the King, was released on Friday, August 27, 2021.

The film, produced and directed by Kemi Adetiba starred Sola Sobowale as the lead character and antagonist and created a lot of buzz on social media with Sobowale featuring in a number of snippets and social media influencers doing skits mimicking her “welcome to the new dispensation”.

Known as Eniola Salami in the film, Sobowale is a very powerful and influential political figure in the film, using all that is at her disposal to eliminate her enemies. In the first film released on October 20, 2018, she was arrested and jailed but was able to escape and leave the country.

The second installment sees her back in Lagos to continue realizing her political ambitions which involve using a lot of dark powers, making her known as ‘Laburu’, meaning evil in Yoruba. The movie was on the top 10 most viewed movies for 7 consecutive weeks on the top 10 website. 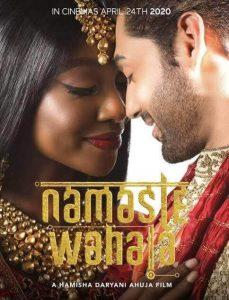 Namaste Wahala which translates to  Hello Trouble is a 2020 Nigerian cross-cultural romantic comedy film produced, written, and directed by Hamisha Daryani Ahuja on her directorial debut. The film stars Ini Dima-Okojie and Ruslaan Mumtaz in the lead roles.

This film was hailed as the first major collaboration between Bollywood and Nollywood which are two of the biggest film industries in the world. The film is based on the romantic relationship between an Indian boy and a Nigerian girl despite coming from completely different backgrounds and cultures. 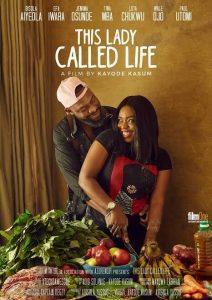 This Lady Called Life is a 2020 Nigerian romance drama written by Toluwani Obayan and directed by Kayode Kasum. The film stars Lota Chukwu, Bisola Aiyeola, and Wale Ojo in the lead roles.

The 120 minutes movie sees Aiye (Bisola Aiyeola) who is a young single mother struggling to cope with the rising cost of living in the modern city of Lagos. She works extremely hard running a modest business that barely supports her to have a decent but not a luxury standard of living as She seeks to become a renowned chef as she was abandoned by her own family.

The film had its theatrical release on 9 October 2020 but the success of the movie spilled into 2021 when released on Netflix with top weekly views in its Netflix debut and received extremely positive reviews from critics. 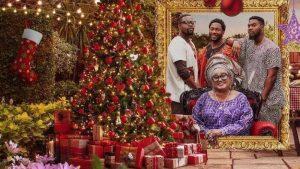 A Naija Christmas tells the story of an aging mother who is distraught because her sons have refused to get married and give her grandchildren. She challenges them by offering the first son to marry to get her Ikoyi house as his inheritance.

In a review for The New York Times, Lisa Kennedy wrote “With naughty nods made nice by a few twists, “A Naija Christmas” might seem to be an entertaining albeit middle-of-the-road holiday romantic comedy. Only that road cuts through Lagos, Nigeria.”

Read also: Ten Nigerian music albums that made waves in 2021 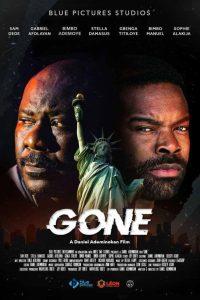 Made in 2018 and recently acquired by Netflix, screened at Calgary Black Film Festival and select Nigerian cinemas in 2021, one can tell that, beyond being well-written, it’s also a technically efficient film.

The story follows Ani, played by Sam Dede, who left his family for twenty-five years and returns to lay claim to them, however tenuous that possibility might be. The film caters to that perpetual greener pastures dream all Nigerians crave, and the consequences that occur if that dream should go awry. Ani returns to Nigeria to find the wife he abandoned with another man, and his children all grown into adulthood.

Gabriel Afolayan plays the little brother and Bimbo Ademoye plays the big sister which is a new iteration in her streak of impressive performances like starring in Nneka the pretty serpent and featuring in the 2019s sugar rush. 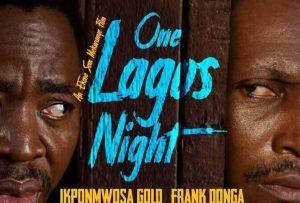 One Lagos Night is a 2021 Nigerian crime comedy film set in Lagos. It was directed and produced by Ekene Som Mekwunye. The 103 minutes movie stars Frank Donga, Ikponmwosa Gold, Eniola Badmus, Ali Nuhu among others.

This movie follows the life of an unemployed graduate who risks his freedom to commit a crime that he hopes would pay off big time.

It first screened at the Nollywood Week, Paris on 10 May 2021 where it was one of the 9 officially selected feature films to screen at the international film festival where it was allotted the closing film slot at the film festival.

After that, Netflix acquired the exclusive rights to the film where it premiered on the platform on 29 May 2021 and since then has received great reviews from critics. 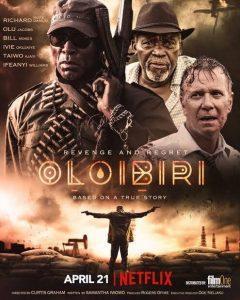 When Oloibiri was released in 2015 to the cinemas, it got the attention of the relevant governmental authorities for its depiction of the plight of Niger-Deltans abandoned by the government and oil multinationals.

The movie is set to get the world-wide attention it deserves as the heart-thumping movie hits the film streaming site, Netflix. An action thriller film directed by Curtis Graham, produced by Rogers Ofime and it stars Nollywood legends such as Olu Jacobs, Taiwo Ajai-Lycett, and Richard Mofe Damijo.

Rated 16, Oloibiri is based on true-life events, with the motive to drive change. After three decades of neglect, the current administration has approved the takeoff of the Oloibiri Museum and Research Centre to look into the challenges plaguing the community where crude oil was first discovered in commercial quantities in Nigeria.

Nominated for 6 categories in the 2017 Best Nollywood Awards, the movie won Best Production Design that year. 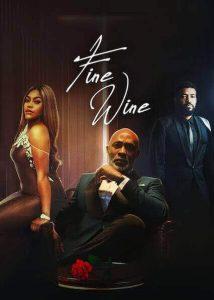 The 2 hours 10 minutes long film revolves around a famous trope of an age-gap romance between Seye George (Richard Mofe Damijo) and Kaima (Oge Nwosu). The synopsis of the movie reads, “After falling for a woman much younger than him, a wealthy, lonely man must confront the social stigma around age gap romances.”

A feel-good romantic movie at its core, the film had its theatrical release on 12 February 2021 on the eve of Valentine’s weekend. 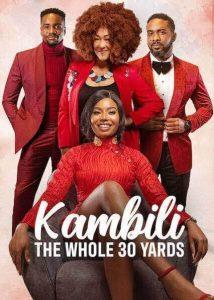 Kambili: The Whole 30 Yards also shortly known as Kambili is a 2020 Nigerian romantic comedy film written by Ozioma Ogbaji, and directed by Kayode Kasum. The film stars Nancy Isime and Toyin Abraham in the lead roles.

The film is based on a young woman’s quest to be married before she turns 30. It had its theatrical release on 4 December 2020 and opened to mixed reviews from critics. The 120 minutes film grossed a total of N20 million at the box office.

A reviewer for Afrocritik scored the movie 5.9/10 saying “The major problem with Kambili is that half the time, it seems to forget it is a rom-com…Not only is the movie longer than it needs to be, but the time and effort dedicated to brewing the romance between Kambili and her eventual love interest are also grossly inadequate.”

Though it had mixed reviews from critics and movie fans it held up as one the most viewed movies on Netflix staying at the top 10 for 4 consecutive weeks.

Ten Nigerian music albums that made waves in 2021

Kumuyi: Defender of the faith