OkadaBooks For the Weekend Featuring ‘Never Play Games with the Devil’ 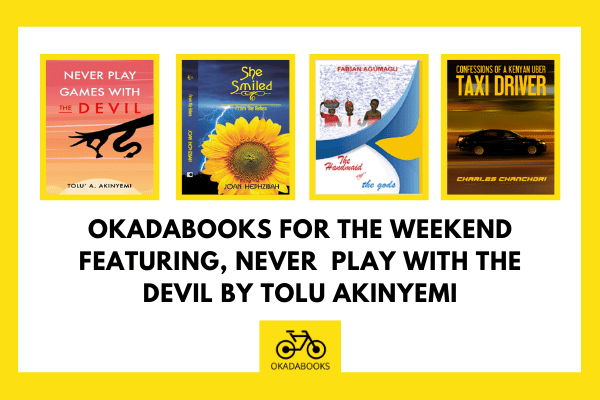 Unwind with Okadabooks this weekend.

Never Play Games With The Devil by Tolu Akinyemi

Hear the poet in a succinct moment of self-adulation, he writes:

“My brain thinks faster than my words can convey.

My mind works magic. Can I live this life forever?”

Divided into three sections, Never Play Games with the Devil showcases a poet, at the height of his powers, exploring several themes in different voices.

In the first section, the poet is the charismatic preacher encouraging people to Hustle, Find their Feet and Grow. He writes about a lot of Broken Men crashing under the weight of expectations; he talks about boys like Eddie and Edmund bullied for the shape of their heads. He humorously addresses the consequence of choices in the title poem, Never Play Games with the Devil.

The second section secures him a seat as an activist. We see the poet tackle, inverse, despotic and undemocratic government, marauding killer herdsmen and the pastor who lost his voice. The poet mourns the hapless souls in the crossfire between society’s rot and the State’s insouciance.

The final poems explore the basis of human relationships. The poems here deal with love, commitment and trust. Never Play Games with the Devil is a didactic collection of poems on pertinent life issues. These poems draw their appeal from the poet’s ability to sustain a figment of thought through the entire span of each poem.Read Now

She Smiled by Joan Hepzibah

The heroine is a young beautiful lady, Chloe Blankson. The novel opens with her severe illness on her first birthday in a lonely and secluded part of town. Growing up, Chloe realised the slight deformity that will define her future, however, an encounter with the Saviour redefined her. As Chloe tried to relate with the growing lady she was becoming, she got convinced that finding true love was as complicated as her childhood insecurity. Read Now

The Handmaid of the God’s Fabian Agumagu

Village Head, Chief Nwo of Ele village, Chief Priest, Assor and their team are seen as the gods’ favoured. Their leadership is popular and praised by the people until an Irish Catholic priest, Reverend Father Clooney gets posted to the village. The clergy challenges certain cultural practices and belief systems in Ele which he considers harmful and unfair to the people. Will this go well with the leadership of Ele village? Find out in The Handmaid of the Gods. Read Now

Confessions of a Taxi Driver by Fabian Agumagu

A short story about Daniel, a taxi driver based in Nairobi, Kenya, who lives a fairly normal life. Their leadership is popular and praised by the people on what started out as a typical day at work, he is subtly coerced into taking another trip even though it was late. One last cab ride on a chilly night and he will be done for the day, or so he thought… This is no ordinary passenger; there is a certain sharpness in his voice that instils fear. Is he a soldier? A criminal? Or worse…? This was the ride of Daniel’s life. In a trip that seems like forever, Daniel’s perspective on life is abruptly changed when he and the passenger have a very important conversation.  Read Now