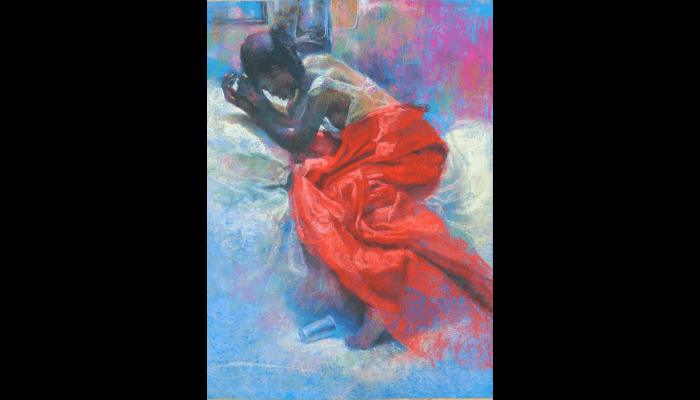 No fewer than 15 oil and acrylic paintings, as well as mixed media works, will be on display in an exhibition titled Figures and Colours, at Angels and Muse: 5, Sumbo Jibowu Street off Ribadu, Ikoyi, Lagos.

The exhibition, organised by Lucid Grand, and curated by Udemma Chukwuma will open on Saturday, September 24, 2022, and runs until Sunday, September 25, 2022, from 1:00 pm to 7:00 pm. It will feature three artists: Stanley Dudu, Dodd Brown and Uchenna Ohagwu.

“We are delighted to present the recent works of the amazing painters. Our informed choices of these three artists were based on their unique perceptions and expressions of figures, compositions and colours. We are inviting art patrons, enthusiasts and connoisseurs to come to see the works, and we assure you of a fulfilling and delightful viewing experience,” said Chukwuma.

For over a decade Stanley Dudu has established himself as an artist of repute after graduation from art school. His love for uncompromising feminine splendour and nostalgic childhood narratives amongst other themes he loves expressing in various media, particularly in charcoals and pastels, has earned him excellence in his artistic career of three solos and well over thirty group exhibitions nationally and internationally.

Dodd Brown is a contemporary Nigerian artist who creates his paintings from different subject matters, life experiences both past and present. He creates and engages the mind with his works on different levels and stories on canvas using several media.

Brown is considered more as a mixed-media artist because of his mastery of weave fabrics, news prints and colours on canvas. He belongs to the school of modern artists through his thought process and expressions on canvas. One of his styles is what he calls FABRICation. His art keeps evolving but not falling short of style and creativity. He obtained his Bachelor of Arts degree at University of Port Harcourt, Rivers State from the Department of Fine Arts and Design.

Uchenna Ohagwu is a multimedia Nigerian artist with an eclectic quest for self-expression. His path as an artist can be traced back to his childhood, which was characterized with his interest and love for drawing during the early 80s and the influence of Uli scripts from his village to the urban explosion of the golden era of hip-hop in the city heralded by comics and graffities.

Born in Enugu State, he advanced his artistic knowledge at the Institute of Management and Technology (IMT) Enugu where he trained in formal figurative practices and techniques, honed over four years in painting, drawing and design. He completed his training in 2003, acquiring a HND in Fine Arts and Design.

His inspiration comes from the conflicts and realities of the 21st century Nigerian, mixed with his digital experience and the organic study of layers and structure of existence leading him to the muse of #horiverti, which in time has transformed to a style of drawing and painting.

These are soft edge, freehand renderings with horizontal and vertical lines, something like a map which to him is an engagement to a test of integrity, discipline and consistency in trying to learn or negotiate his way through life’s multi-layered structures on the canvas. This also serves as a visual metaphor to a therapeutic solution of reconstruction and restructuring needed to improve in life.