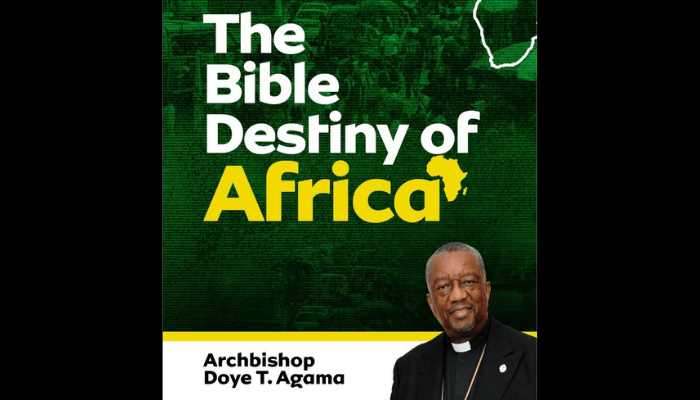 Expected to take the African book market by storm, spiritual leaders, literary buffs and authorities in different fields have given acclaim. It is over the insight and precision with which the book takes the reader on an African journey from the ancient patriarchs through to the New Testament.

The Bible Destiny of Africa, written by Archbishop Doye T. Agama, was released in Nigeria in September of 2022. From the staple of Purple Shelves Publishing Ltd, the transformational book focuses on Africa’s spiritual roles and interconnections with the rest of the world.

The book asks what the world can learn from the new Pentecostal Churches and tells the truth about the uneasy relationship between Islam and Christianity in historic and modern Africa, including the growth of AQIM, Boko Haram and ISIS, among others.

Among several thought leaders that have given plaudits after reading TBDA is the Senior Pastor, Word of Life Bible Church, Warri, Nigeria– Pastor Ayo Oritsejafor (OFR) who said the book is outstanding in its knowledge of the continent, of its past and future possibilities.“I hereby recommend this unique book to all who wants to understand Africa, Africans, and her destiny”, Oritsejafor said.

The President of the Crown Council of Ethiopia—Prince Ermias Sahle-Selassie Haile-Selassie also contributed saying “Archbishop Doyé Teido Agama … tackles these complex subjects with simplicity, clarity, and wisdom. He writes with a passion for Africa and her people that are inspiring. I highly recommend his work.”

As an exceptional book with a scope that goes beyond spirituality and historical research, author of ‘The Riddle of the Oil Thief’– HRM King Bubaraye Dakolo, equally spoke highly of the book and endorsed it for African history scholars and bibliophiles the world over. The chairman, Bayelsa State Traditional Rulers’ Council, spoke further while stressing that “Archbishop Doyé T Agama concisely unravels the tense and often troubled relationshipn between Christianity and Islam in historic and modern Africa. You must read this book.”

Read also: Why the Church must focus more on the redemption message; Taiwo

Other distinguished leaders that have read and given appraisal of the book include; Bishop Mike Royal, and Rt. Rev. Prof. Joshua Owusu-Sekyere, who is the vice-chancellor, Cape Coast Technical University, Ghana. Owusu-Sekyere said the book is a prescription for every Christian but more especially to African Christians.

“The first edition of The Bible Destiny of Africa began as a series of lectures in 2007” said the author– Archbishop Doye T. Agama. “It later became an Amazon bestseller.” Now revised with added footnotes, this new edition further uncovers the original Africans, and their relationships with Ancient Greece, Israel, Mesopotamia and so much more.

Born to the late HRH King Frederick Agama and HRH Queen Beatrice Agama in Southampton, England, Archbishop Doye T. Agama is well-known globally as a Christian leader within the Holiness and Convergence movements. He has been a prominent figure in Churches Together in England and involved extensively in the African Diaspora and Black and multicultural affairs. He teaches that Christianity is originally indigenous to Africa and Asia and that church unity is key to the development of those continents.

Author of over 10 books, Archbishop Doyé Teido Agama (Ret) is the founder of the Apostolic Pastoral Congress, a collegiate collective of bishops, priests and pastors in 25 nations and adhering to Paleo-Orthodoxy. He was for many years the organization’s president and presiding prelate. He has trained, ordained and consecrated hundreds of clergy during his tenure.