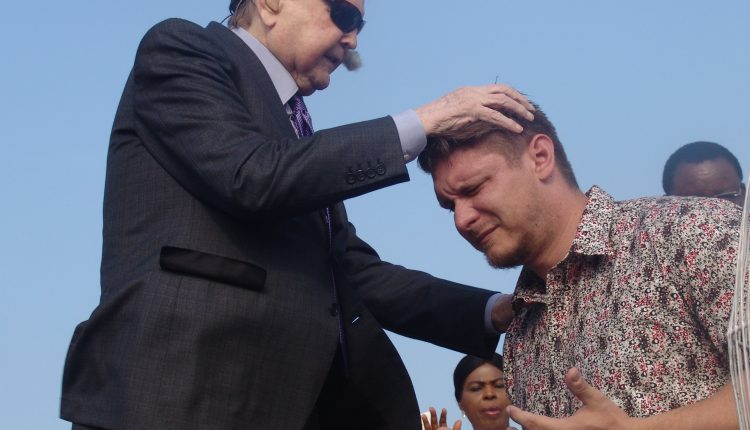 Reinhard Bonnke, one of God’s generals in present day evangelism, who for over 50 years spread the gospel light across Africa, has gone to be with his Lord and Saviour. The German-born evangelist passed on, on Saturday in the United States of America, at the age of 79.

His departure was announced on Saturday by Anni Bonnke on behalf of the family.

She said: “Dear Brothers and Sisters in Christ, it is with sorrow that the Bonnke Family would like to announce the passing of our beloved husband, father, and grandfather, Evangelist Reinhard Bonnke.”

“He passed away peacefully, surrounded by his family, on December 7, 2019. For the past 60 years he has preached the glorious Gospel of Jesus throughout the entire world.

“We want to thank you on behalf of him and our family, for your kind love and unwavering support, which enabled him to preach the matchless message of salvation to countless people,” She further said.

Bonnke on his final evangelism trip to Nigeria in November 2017 was honoured by the Pentecostal Fellowship of Nigeria (PFN) in recognition of his various contributions to ensure souls are won into the kingdom of God through his evangelistic outreaches in Africa.

“As a mark of respect and recognition to the service of God and the gospel in general, PFN is recognising you with this Life-Time Partnership Award for Evangelism in Africa plaque,” Bishop Mike Okonkwo of The Redeemed Evangelical Mission (TREM) said while making the presentation on behalf of the PFN’s president, Reverend Felix Omobude.

Bonnke founded the international ministry of Christ for all Nations (CfaN) over 45 years ago, and currently has offices in the United States, Brazil, Canada, Germany, Czech Republic, United Kingdom, Nigeria, South Africa, Singapore, Australia, and Hong Kong. Since 1987, through a host of major events in Africa and other parts of the world, the ministry has recorded more than 77 million documented decisions for Jesus.

He was an extraordinary evangelist, with special vision for Africa, and Nigeria in particular. Despite the threats to his life at some points, he remained undaunted. Bonnke has remained committed to his vision and calling. He described Nigeria as a “trigger” (referring to Nigeria’s location on the map of Africa).

At 77, the Evangelist said he received a clear directive to go back to Lagos for “just one more time”. It is amazing, and many have wondered how a man of that age could address a huge crowd at the crusade ground, for five days. It is his belief that the command to him to return to Lagos, Nigeria for the final time was not for the sake of it, but must have been orchestrated for something spectacular.

On why Nigeria? He said that the country had so fallen under all manner of sins and criminality that it would only take divine intervention to redeem her from that nadir of hopelessness. The country appears to be under satanic stranglehold and needs urgent deliverance.

During the well-publicised crusade that took place at the Sparklight Estate, opposite OPIC Events Centre, Isheri, after the Berger Bus Stop Lagos, Bonnke, in a historic event, passed the evangelistic torch to youthful American, Daniel Kolenda.

GCR upgrades Afreximbank’s rating to A-, outlook as stable

In my quest to just make a living, i landed myself a career in creating happiness –…

Scare as woman being tested for deadly China virus in…