You need to active Javascript on your
LEAD STORY,Markets,Short Take bdothernews,Food price watch

In six charts, how prices of staple food items in Nigeria have fared in four years

A hike or fall in food prices directly affects Nigerians as a whole but particularly troubles the close to 90 million Nigerians living in abject poverty when on the rise. Rising food prices have been the case this year, according to data by the National Bureau of Statistics (NBS) which puts Nigeria’s food inflation at 16 percent in August 2020, showing a year-on-year increase of 21.5 percent points from 13.17 percent recorded in August 2019.

In August, the NBS reported a jump in prices of all of the above-listed staple food items, except for brown beans which saw a price fall of 0.6 percent.

The selected food price watch is obtained through the collection of prices from over 10,000 respondents across the 774 local governments in Nigerian states, with the average prices for all states taken as the average price for the country.

The average price of brown beans has been increasing this year since it recorded its lowest price in March at N267/kg.

On a monthly basis, the average price of brown beans in August increased by 1.72 percent from N300 recorded in July 2020. 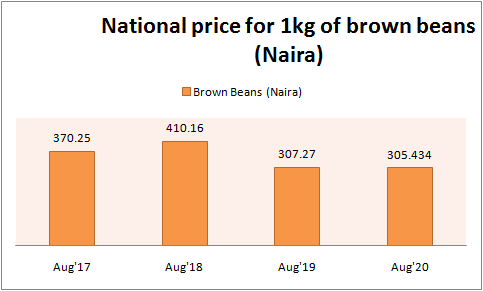 Bread
When comparing average year-on-year prices of a loaf of sliced bread, the month of August 2020 recorded the highest price in the last four years of N312.74 per loaf.

The current average price for a loaf of sliced bread shows an increase of 3.78 percent from its lowest year-on-year price of N301.36 recorded in August 2019 and a 1.83 percent decrease from its price in July 2020.

In January 2020, the average price for a loaf of sliced bread was N302 in January and jumped to N320 in June, but took a downward turn in July at N318 naira.

Bread is consumed in almost every Nigerian household and it is eaten in different forms including toast bread, bread and beans, bread and tea, French toast, and so on.

For the month of August 2020, Bayelsa State in the South-South region had the highest price for a loaf of sliced bread of N463.64 while the Gombe state of the North-Eastern region had the lowest price of N246.67. 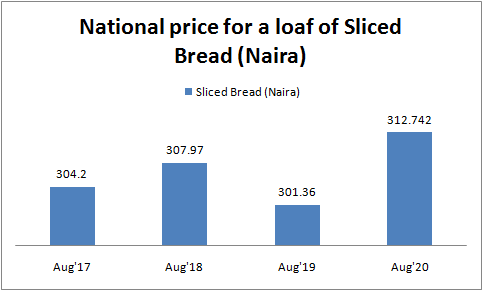 The Nigerian government first banned rice importation from Benin Republic in 2004 and then from all its neighbours in 2016 to not only raise revenue but also improve the production of local rice.

This move was further tightened in October 2019 through the land border closure to curb the activities of smugglers who had been taking advantage of this medium.

Rice is consumed in every household in Nigeria and used in all events and celebrations across the country.

Bayelsa state had the highest local rice price/kg in August 2020 of N559.97 while Sokoto in the North-Western part of Nigeria had the lowest price of N254.26. 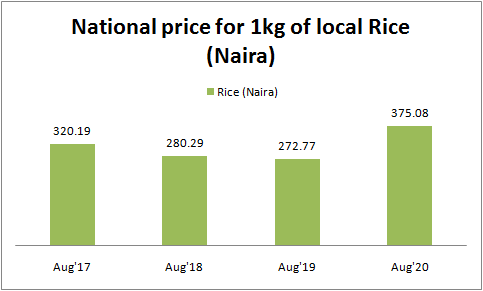 Bayelsa state had the highest price for a tuber of yam of N510.18 in August 2020, while Yobe state of the North-Eastern region had the lowest price/tuber of N131.54. 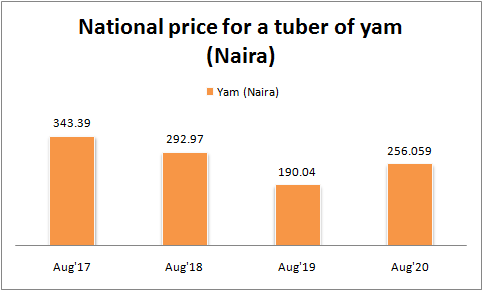 Garri in Nigeria is made from cassava and is either consumed as soaked garri or consumed a swallow meal.
In July 2020, the average price of 1kg of white garri was N222.5, showing that in August 2020 average price increase by 0.92 percent.

For August 2020, the price of white garri was the highest in Bayelsa state at N360.8 while Ondo state in the South-Western region had the lowest price of N158.32. 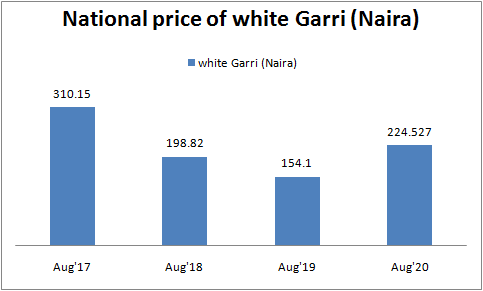 Tomatoes play significant roles in the meals of most Nigerians as it can be used to make stew, soups, sauce, salad, and even consumed as a fruit. 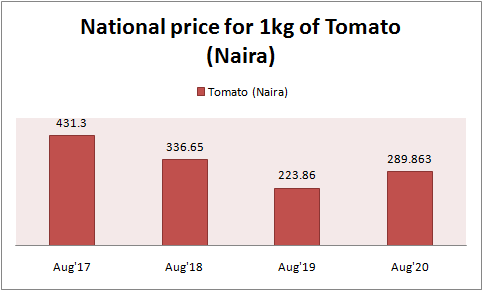