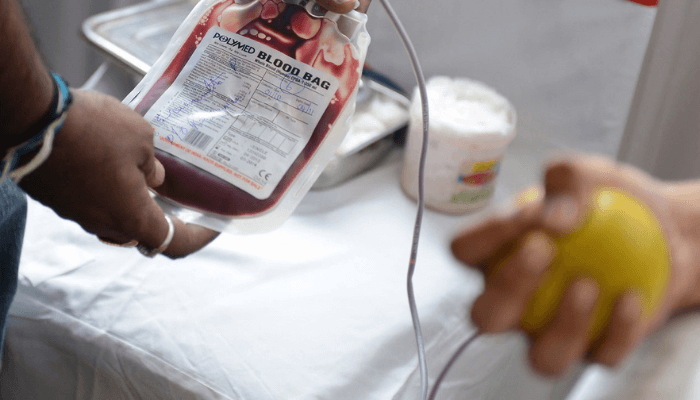 More than 2.5 million pints of blood are unavailable when required for medical intervention in Nigeria, with pregnant women being the hardest hit by a life-threatening problem the country has grappled with for many years, experts say.

With a population estimated at 206 million, Suleiman Akanmu, professor of Hematology and Transfusion Medicine, College of Medicine at University of Lagos, told BusinessDay that Nigeria should be able to collect about four million pints of blood yearly to meet the transfusion requirement of the country.

The highest quantity the country has collected is about 1.5 million units of blood per annum, according to the National Blood Transfusion Service, a figure which some experts consider an overestimation.

Some pregnant women who run into bleeding difficulties during childbirth may require a large number of pints of blood to save their lives. When this occurs in hospitals that lack adequate blood deposits in their blood bank, some women lose their lives and add to the scourge of maternal mortality in the country.

“These are women that have complications such as placenta previa, placental abruption or those that may rupture their uterus while contracting during childbirth or women who after childbirth, the uterus refuse to let out the placenta and they keep bleeding, leading to postpartum haemorrhage,” Akanmu said in a phone interview.

“These are serious situations that actually consume blood in the hospital settings. This is why we treat every woman in pregnancy as if they will be obstetric, and we ask them to donate blood. Getting blood in the blood bank with poor donor education is the biggest challenge. Our people don’t believe that they should donate blood.”

Lagos, Nigeria’s most populated city, faces up to 44 percent shortage of blood supply annually when the demand is expected to be met by at least 200,000 units of blood, Bodunrin Osikomaiya, executive secretary of Lagos State Blood Transfusion Service (LSBTS), told BusinessDay in an interview. The service was only able to meet up with about 56 percent of demand in 2021, representing 103,000 units of blood collected through a total of 151 regulated blood banks.

The World Health Organization (WHO) data as of 2019 show nearly 20 percent of all global maternal deaths occur in Nigeria. One in 22 Nigerian women has a lifetime risk of dying during pregnancy, childbirth or postpartum, or post-abortion, compared with one in 4,900 in most developed countries.

While people involved in ghastly accidents, surgeries, or blood production difficulties also contribute to the demand for blood and blood products, experts say the major indicator for blood transfusion requirements in hospital settings are pregnant women.

Despite investment worth thousands of dollars to improve the delivery of blood to hospitals around the country, Temie Giwa Tunbosun, chief executive officer of LifeBank, in a tweet on Monday expressed deep regret that maternal mortality remains a serious problem in Nigeria.

According to her, women die in childbirth due to the combination of delays in getting to the hospitals, blood shortage and lack of medications, equipment, electricity, water, and qualified health professionals to save their lives.

“That’s it. Fix that and most women won’t die in childbirth! Often I feel dejected that I have not managed to end maternal mortality yet,” she said.

The 2022 World Blood Donor Day is marked with the theme: ‘Donating Blood is an Act of Solidarity. Join the Effort and Save Lives.’

Matshidiso Moeti, WHO regional director for Africa, in a statement, called for more people to become regular blood donors, saying the African region sees a disproportionate number of conditions requiring donor blood, impacting as many as seven million patients every year.

She listed haemorrhage associated with pregnancy and childbirth, severe anaemia due to malaria and malnutrition, bone marrow and inherited blood disorders, trauma and accidents, man-made and natural disasters as some instances of these conditions.

The situation, she said, remains challenging, and worsened by issues such as staff shortages and limited funding from governments and partner organisations for effective blood donor education, recruitment, and retention.

According to Akanmu, Nigeria is still a long way from getting its people to understand that blood donation is not injurious but in fact, improves the health status.

He said more funding support needed to be organised through the government as well as non-governmental organisations for regular blood collection teams across the country.

In the hospital setting, he also called for increased investment in effective blood processing, lamenting that part of the challenge is that the country does not make judicious use of collected blood.

“That implies that we are unable to routinely fractionate blood into red cell, plasma, tablet so that different categories of recipients of blood and blood products are able to benefit from the single use of blood donated by one person,” the professor said.

On the path of LSBTS, Osikomaiya said the state has increased awareness by strengthening its relationship with NGOs, religious bodies, and civil society organisations that are close to the grassroots and understand the local perceptions.

Lagos cuts tuition fee by 65% for students of LASUSTECH, LASUED