Market Questions is the FT’s guide to the week ahead 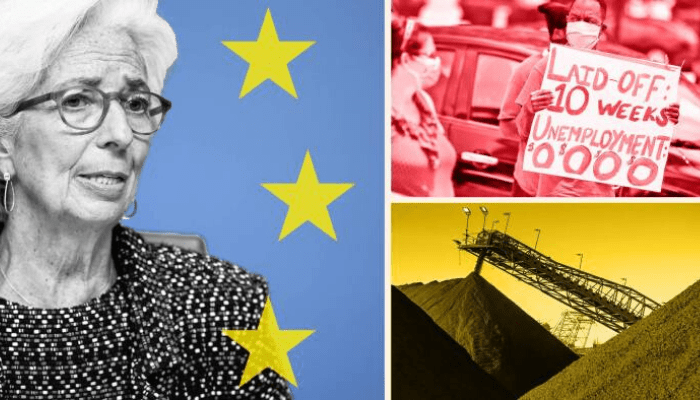 Investors will be paying close attention to the European Central Bank’s monetary policy meeting on Thursday, focusing on economic growth projections for the eurozone and any extension of the bank’s bond-buying programme.

In April, the ECB indicated that the euro-area economy could contract by between 5 and 12 per cent this year, depending on the success of coronavirus containment measures. Economists at ING expect the eurozone to shrink by 8 per cent in 2020, and countries such as Germany, Italy, Spain and France all anticipate big budget deficits as they seek to counter the economic effects of Covid-19.

Investors will also be watching what decision the ECB takes on its €750bn asset-purchasing programme, which many believe will still be needed even if European leaders finalise a €500bn EU recovery fund proposed by Germany and France and agree to the €250bn in extra firepower sought by Brussels.

Known as PEPP, the ECB’s bond-buying programme is designed to hold down borrowing costs for Europe’s increasingly indebted governments, but it is likely to be exhausted by October at the current rate of purchases.

The market, therefore, is expecting the size of the programme to be increased: the questions are when, and by how much. Analysts at Nomura are forecasting it will rise on Thursday by at least €250bn and possibly up to €500bn.

Further complicating the issue is the ruling in early May from the German constitutional court that effectively limits the participation of the Bundesbank in some ECB asset-purchasing programmes. The court did not rule on PEPP, but investors will be looking for indications that the ECB is mindful of a potential legal challenge. Philip Stafford

The release of US employment data for May is expected to show an easing of job losses following a spike in April, offering encouragement for investors that the world’s largest economy is recovering from the Covid-19 crisis.  Non-farm payrolls data for April revealed that 20.5m Americans had lost their jobs, pushing the unemployment level to 14.7 per cent — its highest since the second world war. Job numbers for May, out on Friday, are expected to record a further fall of 8m, according to economists surveyed by Bloomberg. Slowing job losses could add fuel to the rally in the US stock market, which has regained more than a third of its value from its low two months ago in the depths of the coronavirus sell-off.  The number of Americans collecting unemployment benefits fell by 3.9m to 21.1m for the week ending May 16, the US Department of Labor said last week. The drop was better than economists had expected and comes despite a further 2m Americans applying for benefits, pushing the total over the past 10 weeks beyond 40m.

Ian Lyngen, head of US rates strategy at BMO Capital Markets, said “certain sectors of the labour force are starting to get back to work”, adding: “This does not preclude a second round of job cuts in the higher-earning brackets, but it is encouraging that some of the jobs lost to Covid-19 are returning.” Richard Henderson

Iron ore has had a turbocharged run over the past month, rising more than 18 per cent and breaking out of the narrow range between $80 and $90 per tonne where it has traded for most of the year.

On Friday, the steelmaking ingredient, regarded by many as the second most important commodity after crude oil, broke above $100 for the first time since July 2019.

Two factors have been behind the recent advance: weaker-than-forecast supply from Brazil, where shipping patterns have not recovered as usual from the rainy season; and expectations that China, the world’s biggest iron ore consumer, would unleash a huge stimulus package to boost growth.

But there are reasons on both sides why many traders and analysts reckon it will be difficult for iron ore prices to stay in three figures.

On the supply side, weekly shipments from Brazil have picked up in recent weeks, say analysts and traders, and the measures announced during China’s National People’s Congress last week did not match the lofty expectations.

While Beijing revealed plans to issue an extra Rmb1.6tn ($224bn) in local government bonds in 2020 to ramp up infrastructure investment, this is unlikely to boost steel production from already elevated levels. Moreover, its announcement of stimulus for the real estate sector — the largest driver of steel use in China — was limited.

“Market expectations have become a little more cautious since those announcements,” said James Campbell, analyst at consultancy CRU. “This is a stimulus package aimed at getting the economy back on course and not creating bubbles.”