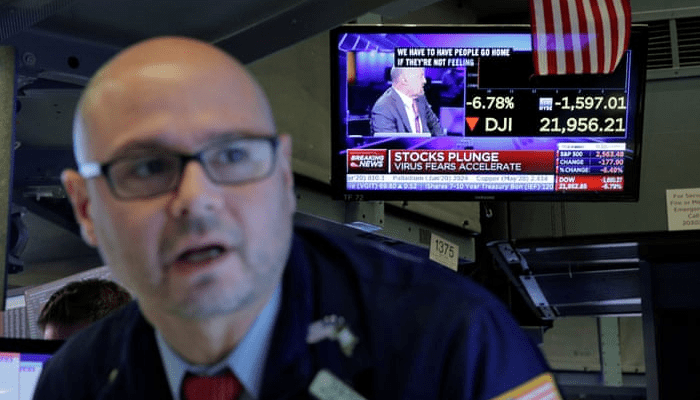 European shares were on track for their worst ever daily loss and Wall Street stocks tumbled 8 per cent on another chaotic day as investors feared economic dislocation stemming from the outbreak of the coronavirus.

The S&P 500 dropped 8.1 per cent, having triggered a marketwide trading curb designed to smooth extreme market volatility on Wall Street for the second time in a week. The “circuit breaker” halted trading for 15 minutes.

The drop left the S&P 500 on track to enter a bear market, having plummeted more than a fifth from its February record high as global stocks convulse through their heaviest selling since the financial crisis more than a decade ago.

Markets across Europe saw even heavier selling than during the 2008-09 crisis, with the regional Stoxx 600 index down more than 10 per cent and on track for its worst-ever day’s trading.

Stocks in the region plumbed new lows after the European Central Bank announced a package of easing measures but kept rates on hold at minus 0.5 per cent. Markets had been pricing in a 0.1 percentage point rate cut, and the reaction suggests investors were hoping for more from the central bank.

This week’s intense sell-off suggested investors were bracing themselves for a worst-case scenario, including a global recession, the lockdown of major urban centres and a severe credit crunch, Nomura strategist Masanari Takada said.

“The market has been jolted to the point of breaking,” he added.

In a sign of the velocity of this month’s tumble, Europe’s Stoxx 600 index has shed 18 per cent of its value this month, leaving it on track for the heaviest fall since the 1987 Black Monday crash.

Travel and leisure stocks came under acute pressure. The Europe-wide index tracking the sector was down 11 per cent, leaving it off more than a third for 2020.

“Although we have seen some stimulus measures from policymakers, it is unclear if it will prove comprehensive enough to mitigate the economic damage arising from coronavirus containment measures,” said Mark Haefele, chief investment officer at UBS Wealth Management.

The sharp moves lower for global stocks followed US President Donald Trump’s announcement of a travel ban in a televised address late on Wednesday after the World Health Organization said the crisis was now a “pandemic”.

“This was the most expensive speech in history,” said Luca Paolini, chief strategist at Pictet Asset Management, pointing to the slide in the value of US stock futures as President Trump spoke. “Investors are voting with their feet, and I can’t blame them. Markets wanted reassuring, and this was not reassuring.”
The latest wave of selling also came as one of Wall Street’s biggest banks warned trading conditions in US government bonds have worsened meaningfully in this week’s market tumult.

Treasuries, the world’s biggest debt market and an essential benchmark for other assets, became “overwhelmed by liquidity concerns” during a hectic trading day on Wednesday, Bank of America said in a note to clients. The bank called on either the Federal Reserve or Treasury to act quickly to stabilise the market.

The 10-year US Treasury yield was down 17 basis points on Thursday to 0.65 per cent, pointing to a strong rally in price. The yield still remains well above the low struck on Monday of 0.32 per cent.

The corporate fallout of the viral outbreak deepened on Thursday. Cineworld, the world’s second-biggest cinema chain, warned that in a worst-case scenario coronavirus disruption could cause it to be unable to pay its debts and call into question its ability to continue trading.

Oil prices, which crashed at the start of this week on the prospect of a price war between Saudi Arabia and Russia, fell on the expectation the ban would mean more pain for the travel industry. International benchmark Brent crude was down 7 per cent at $33.10 a barrel.

Mr Trump’s comments also caused sharp gains for Japan’s yen, which firmed as much as 1.4 per cent after the president’s announcement and is now trading near ¥104 per dollar. The yen, often viewed as a haven during times of stress, has surged in recent days. Dealers have speculated that Japanese authorities may engage in forms of stealth intervention to soften any move to ¥100 per greenback.

The Topix index, which closed 4.1 per cent lower on Thursday, is down by almost a quarter from its recent peak on February 6, putting the benchmark on track for its worst year since the 2008 global financial crisis.
Equities sold off across the Asia-Pacific region with China’s benchmark CSI 300 index of Shanghai- and Shenzhen-listed stocks finishing down 1.9 per cent and Hong Kong’s Hang Seng falling 3.7 per cent. In Sydney the S&P/ASX 200 index closed down 7.4 per cent.

Update: Sanusi, deposed Emir of Kano, on his way to Lagos- Channels TV