Lex in depth: Examining the slave trade — ‘Britain has a debt to repay’

Reparations campaigners argue that businesses that benefit from slavery should compensate the families of slaves. But how big should the bill be? 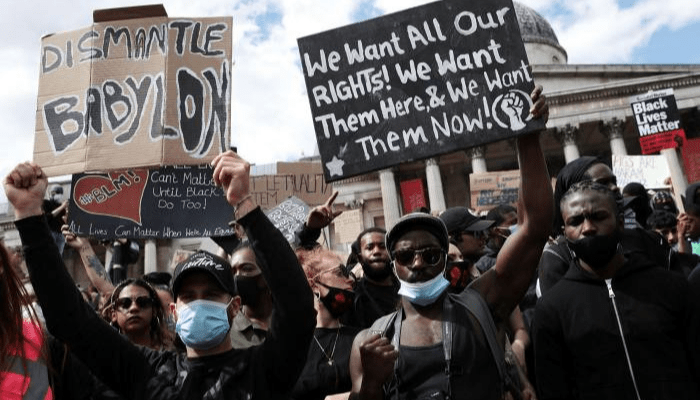 Hilary Beckles recalls when he was a child that “it was normal to see a 15-year-old white boy on a horse driving 100 black people to work on the plantation”. Such social and economic legacies of slavery are inescapable in Barbados, a former British colony. In the UK, however, they have been “brushed under the carpet”, says Sir Hilary, vice-chancellor of the University of the West Indies.

In response to the Black Lives Matter campaign, British business is fumbling to come to terms with its historic debt to millions of Africans who were systematically enslaved and abused for profit. A long-running push for reparations, whose Caribbean leaders include Sir Hilary, is gaining traction. To correspond even modestly with the profits generated by trading in slaves and their products, compensation running into many billions would be needed.

The case for reparations depends not only on historic injustice but also on the belief that exploitation of enslaved Africans contributed heavily to the British economy and continues to do so through tainted capital. This article examines the scale of that shameful legacy.

Slavery certainly helped enrich Edward Colston. He was a member of the Royal African Company, which held the British monopoly to trade enslaved Africans in the 1600s. Demonstrators dumped his statue into Bristol harbour three weeks ago. The effigy had been an embarrassment for years. Global Black Lives Matter protests triggered by the death of George Floyd at the hands of Minneapolis police made it doubly incongruous in a diverse, modern British city.
Chart shows share of Britain’s GDP (%) showing economic activity related to slavery

Imperial Brands, a £14bn business whose forerunners include Wills, a Bristolian retailer of tobacco from North American slave plantations, says: “The removal of the Colston statue was a symbolic moment for Bristol . . . demanding a different, more urgent conversation about discrimination and injustice.”

A database created by University College London shows that many big banks and businesses had their own Colstons, or helped men like him. Bosses of businesses active today, and of their forerunner organisations, shared in £20m of state compensation, or handled it for clients. The money was paid to slave owners for the abolition of slavery in 1833. The Treasury only finished paying its resulting debt in 2015.

A string of financial institutions and companies issued acknowledgments and apologies following coverage of the database. They included the Bank of England, Lloyds Banking Group, RBS and law firms Freshfields and Farrer.

Lloyd’s of London, the insurance market that covered many slaving voyages, and pub chain Greene King also apologised, promising financial support for groups representing black, Asian and minority ethnic communities. They will pay reparations — or something very like them. The University of Glasgow and All Souls College Oxford, both recipients of slave owner donations, have already set up compensatory projects.

With their connotations of current guilt for historic atrocities, reparations are controversial and strongly resisted by many conservatives in business and politics. But campaigners say capital generated by slavery remains on the UK balance sheet to this day. It is, in their view, a monument to exploitation more significant than statues of long-dead slave traders. Some of that wealth should help people still disadvantaged by the racism used to justify an iniquitous industry, they assert.

Britons first began shipping enslaved Africans to plantations in the New World in the 1500s. The so-called “triangular trade” reached its zenith in the 18th century with merchants such as Colston buying slaves in west Africa in return for goods shipped from London, Liverpool and Bristol. Around a third of these people died on the horrific voyage to the British West Indies. Ships returned to Europe laden with West Indian sugar and American tobacco and cotton.

Around 2m Africans were transported in this way, one-sixth of the Atlantic slave trade. Costing around £6,000 each in today’s money, plantation slaves suffered high mortality rates. Four out of every 10 died within three years of arriving at the Church of England’s Codrington Estate in Barbados, for example. They suffered overwork, starvation, cruel punishments and sexual abuse.

Nick Draper, former director of University College London’s Legacies of British Slave-ownership project, describes the plantations as generating “concentric circles” of income. Klas Ronnback, a professor of economic history at Gothenburg University, estimated the scale of three such circles in a 2018 paper. He calculated that by 1800 the triangular trade alone generated 5.7 per cent of UK gross domestic product. That figure rose to 7.9 per cent when plantation receipts were added. The value of all slave-related industries amounted to 11.1 per cent of output. This was significant when the UK economy was still dominated by domestic agriculture.

It was particularly valuable to the City of London, which expanded its international influence via the triangular trade. City figures fiercely resisted the abolition of slave trading within the British empire, finally enacted in 1807.

The 1833 abolition of slave ownership provides another benchmark of its value to business — the £20m paid later in compensation to owners.
Chart show US reparations – four scenarios; based on a study by William Darity and A Kirsten Mullen

This was £30m less than the value of some 800,000 slaves calculated by the Compensation Commission using 1820s market prices, Mr Draper says. This higher figure of £50m can be seen as a proxy for the value owed to liberated slaves for working without pay. Readers may be shocked by the idea of putting a figure on human liberty in this way. But some reparations campaigners see the value of expropriated labour as one measure of slavery’s cost to the enslaved.

The problem is how to make sense of £50m today. The choice of multiplier is sensitive. The larger it is, the bigger the debt the UK may be deemed to owe to descendants of that single generation of slaves alone.

Long-run inflation calculations are meanwhile bedevilled by problems of comparability. Snuff was a living expense in 1833. Smartphone airtime was not. Even so, the £6bn that £50m would translate to in modern money represents a basic value for the labour capacity of Caribbean slaves freed in 1833.

That £50m was equivalent to 12 per cent of GDP, according to statistics from the Bank of England, whose director Samuel Hibbert and associates made claims for £42,065 (£5.5m in today’s money) in compensation for themselves and clients. The same share of the UK’s GDP in 2019 would amount to £264bn.

What of the real investment returns on the £20m that was paid out? Reparations campaigners claim slavery financed the industrial revolution. The UCL database contains some evidence of direct investment: former slave owners put money into the Great Western Railway, for instance. Another portion of slave wealth simply paid for recipients to live comfortably without working. The wealthiest built stately homes such as Harewood House in Yorkshire, now run by a charity with annual turnover of £3m. But if you assume half the £20m compensation that was actually paid out delivered investment returns equivalent to corporate bonds with income reinvested, it would be worth £150bn today.

A debt worth trillions
Campaigners in the US calculate much larger numbers for reparations to African-Americans, around 4m of whom were freed in 1865. William Darity of Duke University and his associate A Kirsten Mullen suggested in a recent report for the Roosevelt Institute, a think-tank, that between $10tn and $12tn could “serve as the baseline for black reparations in the 21st century”. Those vast sums would be needed to remove the mean wealth gap between black and white households, they say.

The US could not easily raise amounts equivalent to half its annual GDP and hand it to a single group of citizens, even if it wanted to. But the idea of reparations is slowly edging towards mainstream political acceptability in the US. Joe Biden, the Democrat candidate in November’s presidential election, says he would support payment of reparations to African Americans and Native Americans if studies show it would be practicable.

In the UK, compensation for slavery is a more pressing issue for business than government. When Caribbean nations proposed a summit to discuss reparations in 2015, David Cameron, the then Conservative prime minister, said it would be better “to move on”.

Calls for reparations tend to be dismissed as divisive and misguided by right-of-centre commentators in the UK. David Green, chief executive of Civitas, a think-tank, says: “I don’t think government or business should compensate anyone,” adding, “People today cannot be held responsible for what happened more than 150 years ago.” He believes support for projects targeted at ethnic minorities would inevitably be misdirected because some beneficiaries would have no enslaved ancestors.

“Most of our prosperity is independent of slavery,” argues Matthew Lesh, research director at the Adam Smith Institute. Innovation fuelled the Industrial Revolution, he believes, more than investment by former slave owners. Adam Smith, the great economist, not only dismissed slave labour as immoral. He also imagined the lack of incentives for workers made it unproductive.

Yet records do not bear out Smith’s view, according to Heather Cateau, plantations historian and dean of humanities at the Trinidad campus of UWI.

Sugar plantations often made double-digit profit margins in the first half of the 18th century, she says. Profits only collapsed after that because white plantation managers became skilled at pocketing them. “Some were taking home more than the owners,” she says.

Any way you cut it, Britons made a lot of money out of slavery. Much of it is still with us, laundered through multiple transactions, in the form of property, loan capital or equity. All four of the UK’s big high-street banks were formed through mergers that included lenders involved in the slave trade.

Reparations in their bluntest proposed form — cheques for people with slave heritage — would be divisive and hard to administer. But Robert Beckford, a British theologian and broadcaster long active in the Caribbean reparations campaign, says: “I don’t think anyone is looking for [personal] cash handouts. They are looking for equity: opportunities to compensate for a lack of opportunities in the past.”

Prof Beckford, who teaches at the Queen’s Foundation Birmingham, advises UK business beneficiaries to apologise, publish historic records and engage in a “restorative process”. This would include financial support for Caribbean nations and black community groups. A new generation of campaigners is bringing added fire to such demands.

The professor says “the family that enslaved my family in Jamaica . . . went bust in 1840 — so the compensation didn’t do them any good”. In Barbados, the Cleland plantation where Sir Hilary carried food to relatives as a boy belonged to the Cumberbatch family, whose best-known descendant is a Hollywood actor. Sir Hilary hopes Benedict Cumberbatch, who starred in the Oscar winning 12 Years a Slave, and the bosses of all the businesses linked to slavery by the UCL database, will make special visits to the Caribbean to see how people live there now. The actor has acknowledged his family’s “dodgy” past and spoken out against racism.

Discussion of slavery’s legacies should result in reconciliation rather than division, Prof Beckford hopes. He says that, for the UK, slavery has been: “the paedophile uncle no one in the family wants to talk about”. After almost 200 years of stonewalling, it is finally becoming a subject for intense debate.

How quickly can the German economy recover?