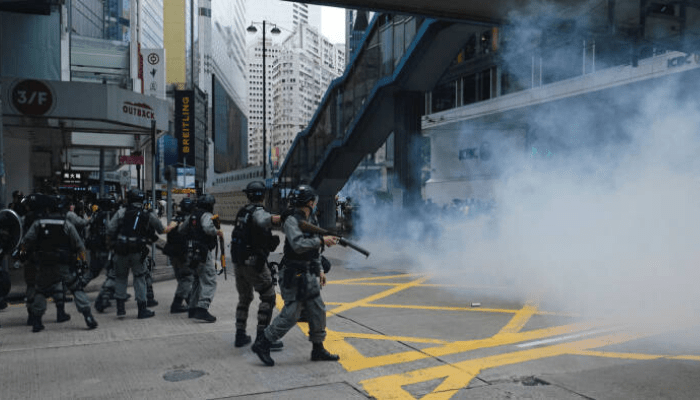 Large-scale unrest has returned to the streets of Hong Kong for the first time since the spread of coronavirus as China seeks to impose a new national security law on the territory.

Police fired tear gas, deployed armoured vehicles and water cannon in an effort to disperse thousands of demonstrators who had blocked roads in one of the city’s busiest shopping districts. The police said they had arrested about 120 people.

“I am here because of the national security law,” said one protester, a 40-year-old woman who asked not to be identified.

“Hong Kong will have no more freedoms” she added. “You will be punished for what you say. I fear that Hong Kong will just become another Chinese city.”

Members of Hong Kong’s pro-democracy camp also worry that the new national security law will erode Hong Kong’s prosperity and undermine its status as one of the world’s leading financial centres.

On Thursday China’s legislature, now meeting for its annual session, will pass a resolution authorising its standing committee to draft the legislation for Hong Kong. The law would prohibit treason, secession, sedition, subversion and the theft of state secrets, while also allowing China’s state security services to maintain a formal presence in the territory.

“It is imperative that the Hong Kong national security legal system and enforcement mechanism be established without the slightest delay,” China’s foreign minister, Wang Yi, said at a press briefing in Beijing on Sunday.

“Violent and terrorist activities are continuing to escalate [and] foreign forces have deeply and illegally interfered in Hong Kong affairs.” The move by Beijing has been heavily criticised by officials in Washington, further escalating tensions between the world’s two largest economies that had already been rising as a result of the coronavirus pandemic. In an interview with NBC on Sunday, Robert O’Brien, the White House national security adviser, questioned whether international companies could continue operating in Hong Kong. “I just don’t see how they can stay. One reason that they came to Hong Kong is because there was the rule of law there. There was a free enterprise system. There was a capitalist system. There was democracy and local legislative elections,” Mr O’Brien said. “ I think you’re also going to have a terrible brain drain,” he added.

Jimmy Lai, publisher of the pro-democracy Apple Daily newspaper, warned that the property market could “collapse” if the new law, which will be drafted by China’s parliament and inserted into Hong Kong’s mini-constitution, scares off investors from mainland China.

“Mainlanders come to Hong Kong to buy real estate for our rule of law, freedom and safety,” Mr Lai, who is awaiting trial for participating in a peaceful but unauthorised protest last year, said on Twitter. “Now mainlanders fear the national security law.”

A local fund manager said that the surprise move by Beijing, announced just hours before the National People’s Congress formally convened on May 22, “will definitely threaten Hong Kong’s status as a financial centre”.

“What’s the difference between Hong Kong and the mainland if this national security law is being imposed directly by Beijing,” said the fund manager, who asked not to be identified. “It sends a very strong signal that Beijing can do anything it wants in Hong Kong.”

Hong Kong’s mini-constitution, or Basic Law, requires the city’s government to draft and pass national security legislation to replace similar laws that lapsed when the former UK colony reverted to Chinese sovereignty in 1997. But it has failed to do so, which Chinese officials say has left them with no choice but to impose them directly, especially after large-scale pro-democracy protests erupted last year.

“Hong Kong will remain a very free society where freedom of expression, protest and press will stay because these are Hong Kong’s core values and are protected by the Basic Law,” said Hong Kong’s chief executive, Carrie Lam.

Despite such assurances, providers of virtual private network internet services used by people in mainland China to evade the government’s internet censorship regime, or Great Firewall, reported a surge in new purchases by Hong Kong residents.

On Friday, NordVPN said that within 24 hours of the NPC’s decision downloads of its consumer VPNs in Hong Kong were 120 times higher than normal, while interest in its business VPN services tripled. Another VPN provider, Surfshark, said 42,000 Hong Kong residents visited its website over the same timeframe, as it sold a week’s worth of VPN subscriptions in one hour.

“We saw a surge of user growth in Hong Kong directly after the [national security law announcement] was made public,” said Naomi Hodges, a cyber security adviser at Surfshark. “It’s clear that the people in Hong Kong feel their freedom is being directly threatened.”

Any expansion of the Great Firewall to include Hong Kong could disrupt operations for multinationals in China, as many of them route their internet traffic through Hong Kong to circumvent mainland censorship.