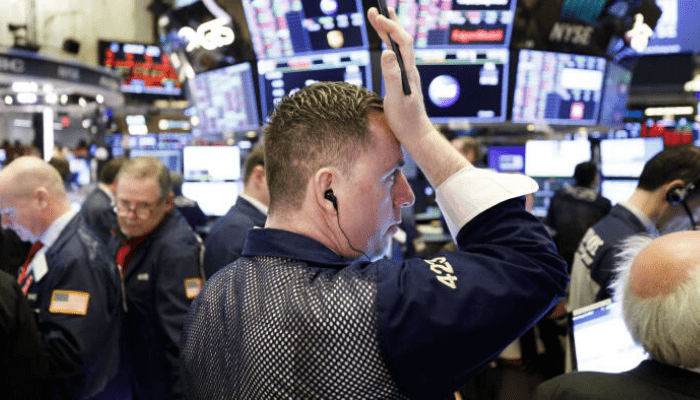 Stock markets edged lower on Thursday, following an escalation in US-China tensions and signs that the health of the global economy was still fragile.

Shares on Wall Street slipped slightly in the first half-hour of trading, with the S&P 500 down 0.1 per cent and tech-weighted Nasdaq 0.2 per cent lower.

Earlier, futures had bounced off their worst levels following the release of US jobless data, which revealed that more than 2.4m people applied for unemployment benefits last week in America.

The number of first-time applications for unemployment benefits in the US has now hit 38.6m during the past nine weeks. However, the pace of new job losses has been declining for seven consecutive weeks, spurring hopes that the worst level for unemployment may be nearing.

Widely watched surveys showed that business activity in the UK and eurozone has begun to tick higher in May, although the purchasing managers’ indices for the region remained deeply depressed.

The eurozone’s partial rebound “suggests that the economy is now on a slow road to recovery”, said Jessica Hinds, an economist at consultancy Capital Economics.

European stocks recovered most of their earlier losses as sentiment improved through the trading day, with London’s FTSE 100 up 0.3 per cent and Frankfurt’s Xetra Dax slipping 0.6 per cent.

Rising tensions between Washington and Beijing was also on investors’ radars on Thursday. US president Donald Trump escalated his verbal attacks on China late on Wednesday, as he accused Beijing of “a massive disinformation campaign” around the origins of coronavirus.

“They could have easily stopped the plague, but they didn’t!” Mr Trump wrote on Twitter, referring to the pandemic.
The National People’s Congress, China’s annual gathering of lawmakers, begins on Friday and will be watched for signs of new stimulus, and a response to Mr Trump’s accusations.

Several strategists and economists expect tensions between the world’s two largest economies to rise further ahead of November’s general election.

“Tensions between China and the United States continue to ratchet up . . . following a slow path of escalation, as [has been] widely expected given the elections,” said Sebastien Galy, strategist at Nordea Asset Management. “It is in neither party’s interest to boil it over, especially in the United States given the feedback loop in the equity markets.”

Global equity markets have rallied since late March on a combination of central bank support, hopes for a Covid-19 vaccine and a strong rebound in business activity as governments ease lockdowns.

“We’ve got to find the right balance as we move forward between protecting people and keeping people healthy — being compassionate. But also being pragmatic about the fact that we need economic activity to also keep people healthy,” he said.

Momentum has stalled throughout May despite some sharp daily swings, with economists keeping a close eye on the easing of lockdowns for signs of a new wave of infections.

An early reading on exports from South Korea again highlighted the destruction to global demand that the disease has caused and the difficulties in restarting economies following lockdowns. Shipments from Asia’s fourth-largest economy for the first 20 days of May shrank more than 20 per cent year on year as imports fell almost 17 per cent, official data showed on Thursday.

Japanese trade data for April were also weak, with a near 22 per cent contraction in exports, marking the worst month since 2009.
Oil prices extended Wednesday’s rally, which came after an Energy Information Administration report showed that US crude inventories had fallen for a second straight week. Brent crude, the international benchmark, rose 2.3 per cent to $36.60 a barrel. West Texas Intermediate, the US marker, rose 2.3 per cent to $34.25 a barrel.

The yield on US 10-year Treasuries slipped 0.01 percentage points to 0.6688 per cent, as investors moved into the debt.