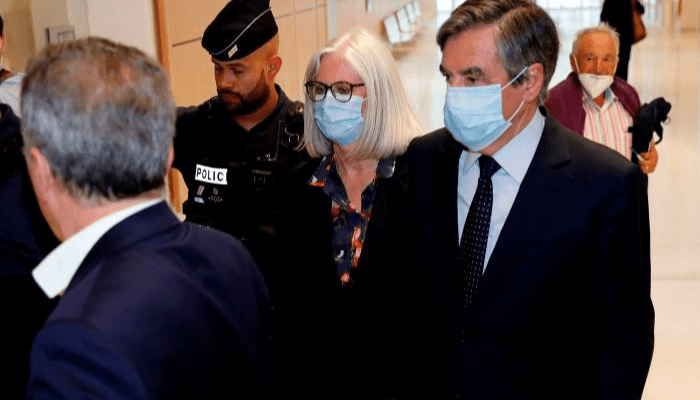 François Fillon, the former French prime minister, has been sentenced to jail for embezzlement after paying his wife more than €1m of state funds for work she never did, in a scandal that derailed the centre-right campaign in the 2017 presidential election and enabled Emmanuel Macron’s victory.
Mr Fillon, who had been the leading candidate for the presidency before the scandal broke, was found guilty on Monday by a French court and sentenced to five years in prison, with three years suspended, barred from political office for 10 years and fined €375,000.

Prosecutors said on Monday that Mr Fillon had developed a habit of “grabbing public money by breaking the rules” and harboured “a profound feeling of impunity, the certainty that his status would dissuade anyone from suing him”.

His British wife Penelope and his associate Marc Joulaud were also found guilty and were each handed three-year suspended jail sentences after misusing state funds for the fictitious employment of Mrs Fillon as a parliamentary and administrative aide between 1981 and 2013. Mrs Fillon was fined €375,000 and Mr Joulaud €20,000. The defendants must also pay back more than €1m to the French parliament.

Antonin Lévy, Mr Fillon’s defence lawyer, said: “This unjust decision will be appealed. There will be a new trial.”

The verdict adds Mr Fillon to a growing list of French postwar politicians found guilty of corruption or caught up in financial scandals. Jacques Chirac, France’s former president, and his prime minister Alain Juppé, were handed separate suspended prison sentences for political corruption in a sprawling case that saw Mr Chirac sentenced in 2011.  Another former PM, Édouard Balladur, faces trial over allegations that cash was funneled from arms sales to his 1995 presidential campaign. While former president Nicolas Sarkozy is also facing trial, probably this year, in a campaign finance case for allegedly overspending by more than €20m in his 2012 run for the presidency. Mr Sarkozy also faces a separate trial in October for influence-peddling after allegedly attempting to bribe a judge in a different investigation.

The scandal has also raised questions in recent weeks about the independence of the judiciary, with some commentators calling for the abolition of the Parquet National Financier, a special financial prosecution office set up in 2014, under Socialist president François Hollande.
Eliane Houlette, the former head of the PNF, testified to a parliamentary committee this month that she had been pressured by her superiors over the investigation into what became known as “Penelope-gate”.

Although she later insisted she was talking about bureaucratic rather than political pressure, Mr Fillon’s colleagues in the centre-right Les Républicains (LR) said her comments showed that the former prime minister was the target of a witch hunt initiated by the Socialist government of the day.

Eric Ciotti, a prominent member of parliament for the LR party, was quoted in French daily Le Monde as saying: “What would we have said if Putin had done the same thing?”

The Fillons’ lawyers failed in an attempt last week to reopen the trial following Ms Houlette’s testimony, and Mr Macron called for the judicial authorities to look into the matter. “It is essential to eliminate any doubt over the independence and impartiality of the justice system in this affair,” said the Elysée Palace.

The head of the judiciary’s trade union, Katia Dubreuil, said citizens were asking “whether the justice system had done its work independently”.
Jean-Claude Magendie, a former head of the Paris appeal court, said that even if Ms Houlette had not been put under political pressure, the speed at which Mr Fillon’s case was investigated before the election was remarkable.

“You don’t need to be a big expert on the justice system to see that justice moved incredibly quickly. It was a hare where normally it is a tortoise,” said Mr Magendie.

The 2017 election ended up as a face-off between Mr Macron and the far-right Marine Le Pen, after Mr Fillon — the LR candidate — failed to make the second round of voting in the wake of accusations which surfaced just three months before the poll.

Mr Fillon had acknowledged that his wife never worked at the National Assembly in Paris but insisted that she worked for him full-time in his constituency in Sarthe in western France.

The former French prime minister has since launched a new career as a partner in Tikehau Capital, an asset management and investment company with more than €25bn under management.