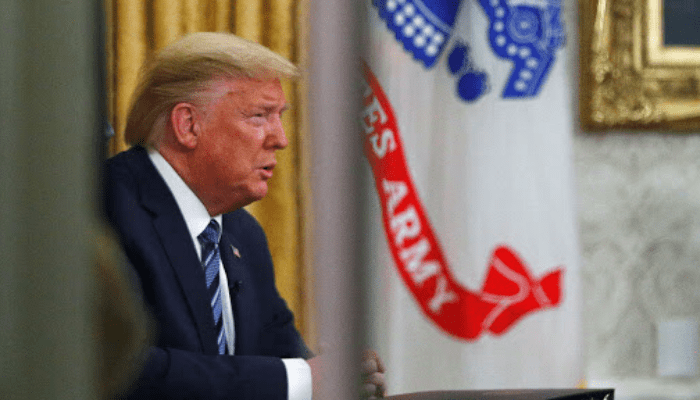 On Wednesday night the global pandemic met US nationalism. It will not take long to see which comes off best. As Donald Trump was speaking, the Dow futures market nosedived. His Europe travel ban came just a few hours after the US stock market entered bear territory — a fall of 20 per cent or more — for the first time since the global financial crisis. It also followed the World Health Organization’s declaration of a global pandemic. Mr Trump’s address was meant to calm the waters. By the time he finished, they were considerably rougher.

His purpose was to convey that he has a grip on the epidemic. Having spent weeks playing down the threat, Mr Trump had already tied one of his arms behind his back. The previous day he told Americans to “stay calm. This will go away.” A few weeks ago he described the epidemic as a Democratic “hoax”.

Then on Wednesday night, he pivoted. He suspended all travel from Europe for 30 days. For the first time since the second world war, direct US travel to the European continent will be closed off. He excluded the UK and Ireland from the ban despite the fact that Britain has almost half the number of US infections with less than a fifth of its population.

Moreover, his action contradicted expert guidelines. The WHO clearly advises against international travel bans because they stifle the flow of medicines and aid, and “may divert resources from other interventions”. Mr Trump has been badly shaken by the stock market fall that has wiped out most of the gains of his administration. Yet his actions will almost certainly deepen market pessimism. In addition to the chilling effect on transatlantic trade, Mr Trump has elevated the uncertainty risk. To put it bluntly, no one has much clue what he will do next.

The same applies to the confusing manner in which he is addressing the US economic fallout. Two weeks ago, Mr Trump said that the $8.5bn Democrats had requested to tackle the virus was too high. He only asked for $2.5bn. On Wednesday, he called for a three-month suspension of the payroll tax, which will cost at least $300bn — more than 100 times larger.

At the same press conference two weeks ago, Mr Trump blamed the stock market decline on the previous night’s Democratic presidential debate. On Wednesday he had still not shaken off the idea that the coronavirus was a conspiracy to deny him re-election.

Perhaps the biggest fallout of Mr Trump’s address was what he did not say. His most glaring omission was any plan to increase America’s capacity to test for infections. Epidemiologists say accurate testing is the single most effective method to counter the disease’s spread. It allows the authorities to isolate clusters, trace the movement of the virus and make critical decisions on where the biggest risks lie. That is what places such as Taiwan, Singapore and South Korea have done so effectively without resorting to the draconian measures taken in China.

The US has tested fewer than 6,000 people out of a population of 327m. By contrast, the Netherlands, with 17m people, is testing that many every day. South Korea, with 51m people, is testing 10,000 a day. The shortage of US kits stems from federal bureaucratic delays. One simple fix would be to import them from Germany, which are WHO-approved.

Mr Trump said nothing about tests other than that health insurers would waive co-pay charges on those being tested. That moderate incentive is irrelevant until the US has the capacity to screen more people. Mr Trump could have tackled the problem at a stroke by saying the US would import as many kits as necessary. But that would have undercut the spirit of his message: the epidemic comes from a “foreign virus”, he said; America must, therefore, narrow its access to the world.

It is unclear how Europe and other countries will respond to Mr Trump’s dramatic announcement. In an ideal situation, America’s president would have acknowledged that the pathogen knows no borders and has no political loyalties. It poses a common threat that requires a coordinated global response.

That is not the way Mr Trump thinks. Public health officials say that millions of Americans will probably be infected. The official total now stands at 1,312. Mr Trump has never faced a crisis on anything like this scale — and it is still in its early stages. His remedies so far are cause for deep concern. Who will he blame when they fail?