Democracies are ill-suited to deal with climate change 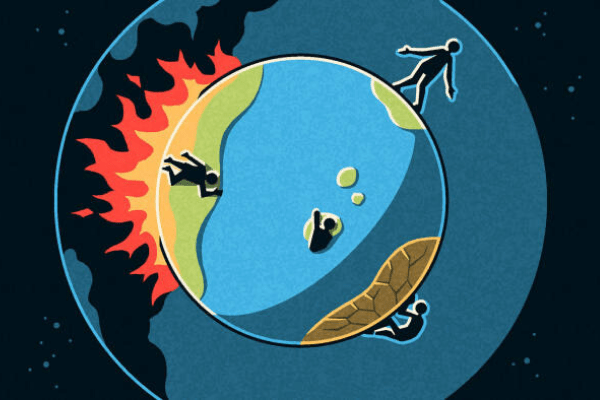 Around my parents’ home on England’s south coast, global warming is proceeding so benignly that French champagne houses are buying up tracts of local hillsides. Trends like this have helped to temper the global north’s response to climate change over the last 30 years. “Global warming is a terrible thing,” we tell ourselves. “But its main victims will tragically be in the poorer countries. Canadian mangoes anyone?”

Harrowing images of Australian bushfires and Californian wildfires should be blowing a hole in such complacency. But they also crystallise how hard it is for democracies to mobilise public action. If images of Sydney enshrouded in smoke, or Napa Valley in flames, cannot arouse the voter’s imagination, what will? Those hoping the world’s wealthiest countries will take more of a lead on climate change must confront three hard truths.

The first is that politicians struggle to look beyond the electoral cycle. It is hard enough for a government to invest in education, which can take years to show results. It is that much more difficult to take unpopular actions to reduce carbon dioxide output that might take generations to bear fruit, and even then go unrecognised.

In contrast to spending on education, investing in carbon reduction poses a free-rider problem. If the US banned coal while Canada went ahead with its trans-mountain oil pipeline, the former would feel bamboozled. There is enough carbon in Canada’s oil sands to outweigh every virtuous action taken by the rest of the planet. It would take a very special country to do the right thing in the knowledge that selfish actions by its neighbours could render its sacrifices futile.

Consider Australia. Even if the Labor party had won last year’s general election, it would have had trouble making the case for radical action on climate change. Australia could cut its emissions to net zero and still suffer decades of record drought and fire. As it happened, the Liberal party led by Scott Morrison, who mocks environmentalists, snatched victory and helped sabotage last month’s climate talks in Madrid. They broke up without agreeing on a global carbon-trading system chiefly because of objections from Australia and the US.

The second obstacle to climate change action is uncertainty. It is impossible to establish that any single disaster is entirely man-made. Despite the summer fires in Siberia, heat deaths in Pakistan and two once-in-a-century storms hitting Houston in two years, natural disasters occurred before the era of climate change. Scientists can give high probabilities that climate change is real but rarely certainty. Even our vocabulary occludes clear thought. In the early 2000s, pollster Frank Luntz advised the Republicans to drop “global warming” in favour of “climate change” to drain it of urgency. The latter sounded more like you were “going from Pittsburgh to Fort Lauderdale”, he wrote.

Perhaps green activists should take a leaf out of Mr Luntz’s book and stop saying “natural” before “disaster”. There is nothing natural about rapidly receding polar ice caps. Scientists should also do a better job of explaining that science rarely deals in absolutes. It is not certain that you will fall sick if you drink tap water in a cholera zone. But you would be 100 per cent foolish to forgo the vaccine. Likewise, we should take a pinch of salt every time a politician raises statistical doubts. Climate change denial has largely been replaced with talk about scientific uncertainties.

The third obstacle is — how to put it? — human nature. Few people want to confront a massive problem when there are petty scores to settle. This works on a global level as well as a personal one. I have spoken to people who are more exercised by Greta Thunberg’s mannerisms than with the content of her message. They find the fact that a 17-year-old girl is lecturing grown-ups on climate change more grating than the likely extinction of the Great Barrier Reef. We filter what we want to see.

Fox News viewers hear very little about the science that links climate change to Australia’s bush fires. Had a transgender activist started a fire one-thousandth the size, it would no doubt be dominating conservative airwaves. Yet Fox chairman Rupert Murdoch’s Bel Air home came close to being burnt by one of California’s 2017 fires.

How can we stave off fatalism? In The Uninhabitable Earth, David Wallace-Wells says the world has pumped out more carbon dioxide since the 1992 Earth Summit in Rio de Janeiro than in the whole of preceding human history. Meanwhile, Donald Trump, the US president, is more concerned about wind energy. Last month he railed against the “tremendous fumes” generated when turbines are manufactured and said they “look like hell”.

If we want action, the best response is to talk about the economy. The age of abstract climate change is over. The 2018 fires cost California an estimated $400bn, according to Accuweather. That is more than half the annual US defence budget. Even before the latest fires, Deloitte estimated that the economic costs to Australia of natural disasters would rise to A$39bn ($27bn) a year by 2050, equivalent to 2 per cent of the country’s current gross domestic product. No amount of English champagne could make up for that.