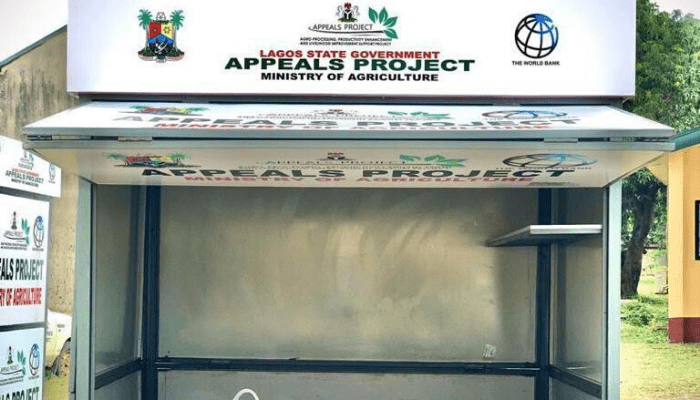 In a bid to power the agro-economy of Lagos, the state government in partnership with an indigenous company, Elite Logistics and Development Services; the manufacturers of Elite Solar Kiosk, recently unveiled solar-powered kiosk for agro-processing.

According to the government, the solar-powered kiosks would ensure easy and effective market access for farmers, agripreneurs and stakeholders in an eco-friendly manner.

The State Acting Commissioner for Agriculture, Abisola Olusanya, made this known recently during an inspection tour of the Ministry’s facilities at Oko-Oba, Agege.

The solar-powered kiosk, according to Olusanya was the brainchild of the World Bank Assisted Agro-Processing, Productivity Enhancement and Livelihood Improvement Support (APPEALS) Project whose core interventions are food security, agro-export potentials and livelihoods.

APPEALS Project aims to facilitate market access in a more eco-friendly manner and provide the agro-industry with uninterrupted electricity to power the farm business.

In line with the THEMES agenda of the Lagos State Governor, Babajide Sanwo-Olu, the APPEALS project seeks to enhance agricultural productivity of small & medium scale farmers, improve processing and marketing of the target value chains, as well as foster job creation along identified value chains.

Read also: Why the market is not sold on the idea of a big rebound in oil prices

The Lagos State Governor, in 2019 pledged to encourage the development and greater use of cleaner, safer and more suitable energy in the State.
The adoption of Elite Solar Kiosk by the state government to tackle the perennial shortage of energy supply and improve capital productivity for Small & Medium Enterprise has been described by analysts as part of the governor’s vision coming to light.

Meanwhile, the poor power supply in the country is a major infrastructural challenge that has had an immense effect on production output in most especially Lagos, Nigeria’s commercial hub. A lot of Small and Medium Scale Industries(SMIs) operate almost totally independent of state-provided infrastructure.

According to the World Bank, Nigeria has enormous solar energy potential, with fairly distributed solar radiation averaging 19.8 MJm2/day and average sunshine hours of 6h/day, which can effectively end energy poverty if optimally harnessed. The Elite Solar Kiosk is part of Nigeria’s journey to achieve sustainable energy security and become a climate-resilient economy, thus reducing millions of carbon dioxide emissions into the atmosphere annually.

The Elite Solar Kiosk which works 100 percent off-grid is designed and fabricated locally in Nigeria. It is a one-stop, multi-user quick-build that can be easily transported and set up anywhere; even in remote communities.

The solar-powered structure which combines a state of the art design as well as high battery capacity to provide all-day power and backup ten hours of power after sunset will support the sustainability of the APPEALS project, the manufacturers said in a statement.

According to Elite Logistics and Development Services, the potentials of the solar-powered kiosk for the World Bank-funded APPEALS project amplifies the link between energy and development. Its gains include economic development clean energy, infrastructural development, social development, security and sustainable growth.

David Adesanya, the Managing Director of Elite Logistics and Development Services reckons that investment in renewable energy is vital because of its multiplier effect in society.
“The final usage of these kiosks has huge potential to alleviate poverty and encourage investors to remain and expand within the territory they occupy. The production of these kiosks alone has provided employment to thousands of craftsmen including welders, electrical engineers and machinists,” he said.

The company believes solar-powered kiosk is a prospect for economic growth as it has an immense effect on reducing the rate of unemployment. With Elite Logistics and Development Services Limited feeling the impact of fast growth.
It is also optimistic that the indigenous kiosk can generate employment opportunities for small and medium enterprises owned by women, youth and persons living with disabilities. Each Elite Solar Kiosk, if strategically located, can provide service to at least 2,500 local users per week, it explained.

“With support for renewable energy from stakeholders in the public and private sectors, a growing number of people now have access to clean, inexpensive power to light their homes and grow their businesses in Nigeria,” Elite Logistics and Development Services said.

SMEs in baking industry urged to embrace innovation to scale