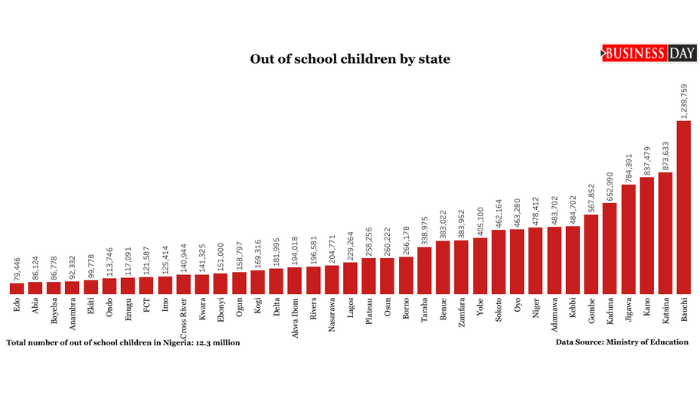 Bauchi State has 1,239,759 out-of-school children, the highest number recorded by any state in Nigeria in recent time according to the ministry of education’s record for 2022.

The United Nations International Children’s Education Fund (UNICEF) recently lamented that Nigeria has the highest number of out-of-school children in the world.

According to UNICEF, the country has produced one among every five out-of children in the world with statistics showing that the government spends only 2. 4percent of its gross domestic product (GDP) on both health and education.

World Bank report in June 2022 indicates that Nigeria has more than 11 million out–of–school children between the ages of 6 and 15.

Friday Erhabor, a public affairs analyst believes the major cause of this ugly trend is that most state governments, especially the northern states have failed to pay enough attention to education.

He also figured poverty and insecurity as other factors responsible for that.

“A lot of parents cannot afford the cost of education. Insecurity is also a factor. A lot of children are in internally displaced persons (IDP) camps because their parents have been displaced by terrorists and insurgents,” he noted.

Erhabor urged the state governments to embrace education as a tool to alleviate poverty and empower its citizens.

“State governors should enforce compulsory free primary and secondary education in their various states. The school feeding program by the federal government should be supported by the various state governments,” he said.

Boye Ogundele, a teacher does not accept the figure to be truly reflective of the situation of things but thinks that more children will still drop out due to the rising cost of living and eroded societal value among others being experienced across the country.

“The figure might not be accurate but the truth is that more will still drop out because the societal value has been eroded. Many graduates are jobless and without hope for tomorrow.

“Besides, the government is making education a privilege and not the right of the citizen again. Getting rich quick is the syndrome among the youth nowadays. Their language is “I want to blow” not minding the source of the wealth,” he said.

Similarly, UNICEF states that the out-of-school children phenomenon in Nigeria is multi-causal and will require a combination of interventions. On the demand side, reducing the cost of education by eliminating school fees, providing cash transfers, and shifting socio-cultural norms that prevent school enrollment are critical steps pointed out.

Miriam Mareso, the UNICEF Education manager, Sokoto office in her speech during a five-day media dialogue on girl child education organised for media representatives reporting in Sokoto and Zamfara States urged the government at all levels to, for the sake of creating an enlightened society, implement all policies on girl child education and to ensure the application and fulfillment of budgeted funds for that purpose.

“Government at all levels is expected to put more efforts in implementing policies on girl child education and ensure sustainability while gender and cultural norms, among others, had been identified as some of the major factors responsible for less enrolment of the girl child, especially in Northern Nigeria,” she said.

The UNICEF education manager noted that an average poor girl in Nigeria might have only 50 percent opportunity of gaining access to both primary and secondary school as there has been only 20 percent enrolment in primary schools while about 30 percent are enrolled in secondary school.