Kanu, Igboho’s separatist agitation and the power of ethnic nationalism 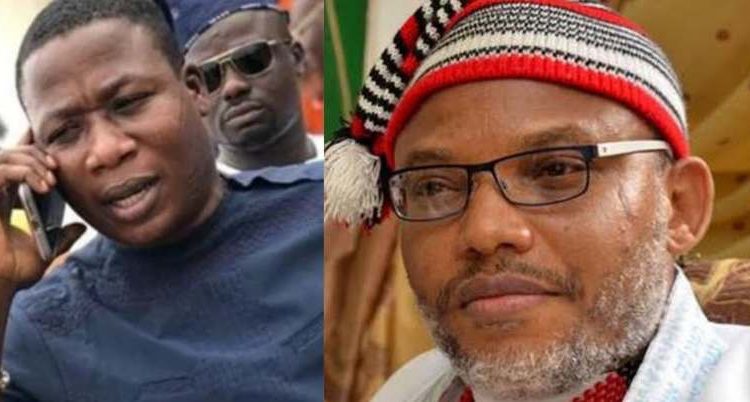 The current separatist agitations in Nigeria are not surprising in view of the country’s diversity, the disparities in demography; land mass, natural resource endowment, educational, social and economic development.

Arguably, these disparities have created and continue to sustain mutual mistrust, acrimony and fear of ethnic domination not only amongst Nigeria’s 250 ethnic groups, but also amongst the majority groups; inter se and the ethnic minorities.

It is in this light that we condemn the current arrest and detention of Nnamdi Kanu, Sunday Igboho and other separatist agitators by agents of the federal government.

The Nigerian constitution, the African Charter on Peoples’ Rights and the United Nations Declaration on Human Rights all of which Nigeria is a signatory guarantee individual’s freedom of speech, association and movement.

Therefore, people who agitate for separation and has reasons to think so should not be treated as common criminals. You cannot force a person to live with you if he or she feels otherwise.

From history, agitation for peaceful separation fanned by ethnic nationalism has been happening and will continue to happen because human needs are insatiable

Reasons for the demand for separation by various ethnic groups could be found in the centrifugal forces generated by Nigeria’s ethno-cultural diversity pre-independence which have continued to ignite separatism in the federation with each disadvantaged ethnic group agitating for greater space for self-expression.

The military junta, which ruled Nigeria for the longest period since post-independence effectively, suppressed these tendencies through brazen force without necessarily exterminating them.

However, with the return to democratic rule in May 29, 1999 came a resurgence of separatist agitations which have polarised the federation along ethnic, regional and religious lines thus supporting the view expressed by Walter Emerson that the introduction of democratic institutions may sometimes accentuate existing ethnic divisions in ethnically divided polities.

Arguably, the ingrained ethnic rivalries amongst Nigeria’s disparate ethnic groups were not hidden from the colonial government because as the Secretary of State for the Colonies, Oliver Lyttelton, once said, “the only cement which kept the rickety structure of Nigeria together was the British… left to themselves they would clearly fall apart in a few months.”

Although, and fortunately too, the above grim prediction has not materialized, there is no doubt that the country is more divided now than ever before. The increasing drums of separatism being beaten by several ethnocultural and militant groups including the Movement for the Actualization of the Sovereign State of Biafra (MASSOB), the Indigenous Peoples of Biafra (IPOB) led by NnamdiKanu, the Niger Delta Avengers, Movement for the Emancipation of Niger Delta, Northern Elders Forum, Yoruba Separatist Group led by Sunday Igboho, Arewa Youths’ Consultative Forum, etc., are irrepressible signs of the fractured state of the Federation of Nigeria.

From history, agitation for peaceful separation fanned by ethnic nationalism has been happening and will continue to happen because human needs are insatiable. In some cases, separation serves as an avenue for a healthy competition for development as in the case of Singapore and Malaysia, India and Pakistan, Norway/Denmark/Switzerland.

Indeed, it is difficult to think of any multi-ethnic state in Europe where one group dominated the rest that hasn’t broken up. For those who do not know, what we call ethnic groups in Nigeria are called nations in Europe. There is nowhere in the world where the white man accepts domination from another white man in perpetuity. The founding fathers of present day America did it when they moved away from British domination to their current abode.

It used to be so under the Roman Empire and the like. Not anymore. The Communists tried it, dividing society into capitalists and proletarians, deluding themselves that ethnicity are effectively swept under the carpet, but what followed? The Communist edifices in Czechoslovakia, Yugoslavia, and the big brother, USSR, all collapsed, while the two Germans that are ethnically the same but split by communism vs capitalism were reunited. Such is the power of ethnic nationalism.

Czechoslovakia was made up of two ethnic groups; -the Czech and the Slovakians. Both separated peacefully on 1st January 1993. The former is today 10.6 million people and the latter 5.4 million. Added together, they are not up to Lagos. Yet, they split for peace. Yugoslavia in 1991 was 23.2 million, barely more than Lagos population. It broke into six countries the same year – all along ethnic lines, namely: Bosnia and Herzegovina, Croatia, Macedonia, Montenegro, Serbia, and Slovenia.

There are other instances. In 1947, the British India Dominion was partitioned into India and Pakistan, in 1971, Bangladesh secededfrom Pakistan and in 1965, Singapore split from Malaysia for a variety of reasons, including religious.

Even small African countries such as Ethiopia and Eritrea parted ways just as Sudan and South Sudan became separate countries. Today, our fingers will not be enough to count the number of countries that have emerged from the USSR.

To address separatism in Nigeria, the federal government needs to look into the concerns and grievances of the various ethnic groups through dialogue as opposed to the use of military force. More so, it is important that the Nigerian government revisit the 3R policy of “Rehabilitation, Reconstruction, and Reintegration” promised after the Nigerian Civil War.

It has been argued on several occasions, that the failure of government to achieve this is one of the major reasons for the recurrence of uprisings.

Unless the government takes some form of action to understand the concerns of the separatist agitators, it risks perpetual agitation for independent entities from other ethnic groups.