Edikaikong: A delicious and nutritious soup from the South South of Nigeria

Welcome to another edition of Culinary Delights: recipe edition. This week I decided to try something out of the box and I am bringing you a delicacy called Edikang Ikong soup which is a highly nutritious, delicious and savoury vegetable soup natively prepared using ‘ugwu’ (the native name for fluted pumpkin leaves) and Malabar spinach (locally called waterleaf ). This soup is another ethnic staple famous in and native to the Efik and Ibibio people of Cross Rivers and Akwa Ibom states. 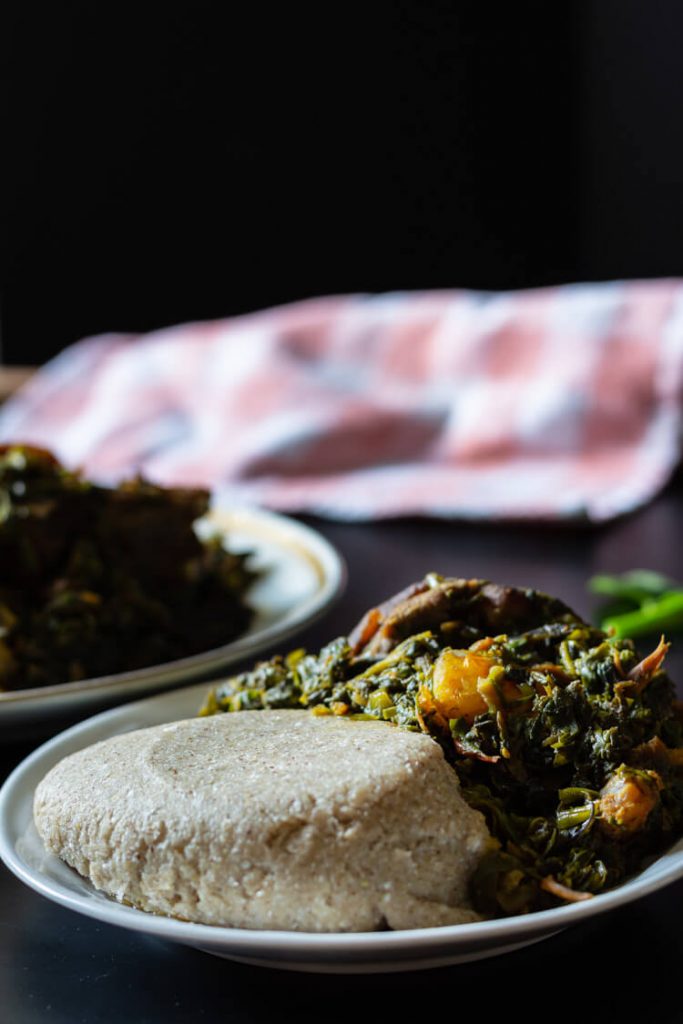 South-South Nigeria is one of the geopolitical zones of Nigeria, consisting of the following states: Akwa Ibom, Cross River, Bayelsa, Rivers, Delta and Edo.

Edikaikong joins the list of Efik or Ibibio delicacies that are considered delicacies in Nigeria. I was first introduced to this soup my housekeeper Mary, a few years ago. She is originally Akwa Ibom and from time to time, would graciously prepare this soup for me. I was feeling nostalgic and decided to give it a try in my free time this past week.

Amusingly, my friend Nicole who is from Akwa Ibom tells me that it is also no surprise in local settings for aspiring bachelorettes to have their ‘wife material’ status confirmed once they know how to make this recipe, elevating them from girlfriend to “ultimate wifey” within a single taste!

So here it goes:

1. Wash and cut the pumpkin and water leaves into tiny pieces. Put them in separate sieves to drain out all the water as much as possible.

2. Cut the Kanda into small pieces. Cook the beef, kanda and the dry fish with the 2 bulbs of diced onions and the Maggi cubes with a tiny splash of water

3. When the meat is done, Season and boil your meats with stockfish. I use beef, goat meat. Add just enough water to cover the meat, and bring to a boil. Depending on how tough the meats are, this volume of water should be enough. Watch it closely though.

4. Add a generous amount of palm oil, the crayfish and pepper and leave to boil for about 10 minutes.  Note that the palm oil serves as the liquid in the Edikang Ikong soup. You should try as much as possible to make it the only liquid in the soup.

6. Now add the pumpkin leaves and salt to taste. Stir the contents of the pot very well and turn off the heat. Cover the pot and leave to stand for about 5 minutes.

Voila. Your soup is ready. You can eat it with fufu, semo, wheat, Eva or ounces yam.

Please try it at home and let us know how it goes!

READ THE LAST EDITION OF CULINARY DELIGHTS:  Warm up this Harmattan with this delicious pepper soup recipe

Cook to your hearts desires this Valentine’s Day