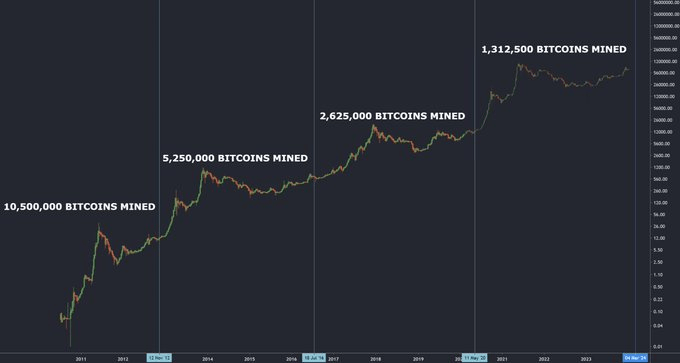 In about three months’ time, the third network change nicknamed Bitcoin Halving event will take place. This is done to keep inflation in the cryptocurrency market under control.

After the halving between 14 and 18 May 2020, the number of bitcoins left to be mined will be 2,625,000. There are currently around 18 million bitcoins in circulation, which is roughly 85 percent of the total capitalisation. The last Bitcoin should be mined around the year 2140.

Bitcoin halving refers to a process of reducing the rate at which new cryptocurrency units are generated. For instance, the halving in May would see the block reward fall from 12.5 to 6.25 bitcoins. Essentially, halving ensures that miners have to spend more time to mine each of the cryptocurrency. Invariably, the miners would likely push up the price of the cryptocurrency to compensate for the extra effort.

The bitcoin community considers it as the most important date in the calendar primarily because of expectations that price will soar. Already anticipation of the halving event is said to be playing a big role to the bull run the price of bitcoin has seen in 2020. The price of bitcoin on Sunday 9 February rose past $10,000 for the first time since October 26. As at the time of writing this article the price was at $10,391.

Miners are responsible for the existence of bitcoin. Mining is also a complicated and expensive business. It demands a lot of electricity and specialised which is why there are only a few countries capable of supporting the mining activities. The reward is arguably the only reason the miners are dedicated to it. For every ten minutes, a “block” of bitcoin transactions is solved by miners and added to the bitcoin blockchain, the reward comes back in form of new bitcoins, which are generated and added to the circulating supply every ten minutes. This is also known as the block reward.

For miners, bitcoin halving involves slashing in two of the rewards they get. Currently, miners get 12.5 Bitcoin when a block is mined on the blockchain. But the halving means that the number will drop to 6.25 Bitcoins.

“The halving in 2020 will have great impacts on Bitcoin miners: 1) Miners with low mining efficiency will be forced to pause and re-evaluate their business operations. 2) Digital mining is becoming the racetrack for giant international companies because they have more advanced machines and cheaper sources of electricity.” said Global CEO of the RRMine Bitcoin cloud mining platform Steve Tsou.

Price upsurge is the biggest expectation of most consumers. In a Twitter poll, 61.4 percent of respondents said they think the price will go on a long bull run soon after the halving. But it is not exactly so.

The price of bitcoin comes down to demand and supply. While the scarcity that could happen as a result of the halving will make existing bitcoins more valuable thereby shooting up prices, in the previous bitcoin halvings (2012 and 2016) the prices crashed one year after a surge. Why does this happen? Some experts have pointed to the history of previous halvings in which high volatility occurred after 12-18 months of a bull run and predicted that history could repeat itself.

“The cryptocurrency space is different now though, and the impact of the halving harder to predict,” said Marcus Swanepoel, CEO of Luno. “It is a more mature space, with institutional investors and products such as futures meaning that the cut to supply is more likely to be more priced in than previously. There are also other cryptocurrencies such as ETH and XRP to take into account, offering competition for users.”

Bitcoin hash rate could be affected

A hash rate is a general measure of the processing power of the bitcoin network. As bitcoins are mined, blocks of verified transactions have to be hashed before being added to the persistently growing blockchain.

Hashes are created by successfully completing an intentionally difficult mathematical puzzle. The hash rate is a measure of how many times the network can attempt to complete this puzzle every second.

In recent times the hash rate has been hitting all-time-highs. A rising hash rate signals continued growth and stability.

“However, because there is less supply being created over time, the halving may cause the price of bitcoin to rise, thereby increasing the value of the now smaller reward. This means that in the long run, the halving will probably not have a major impact on hash rate,” he said.

Transfers on bitcoin blockchain rise to 1-year high in September

Monerium Partners with Algorand to Build Next Generation of Fiat Transaction

Over 500 new coins listed in August as cryptocurrency frenzy peaks