Legal fireworks rage over Buhari’s lockdown order on Lagos, others 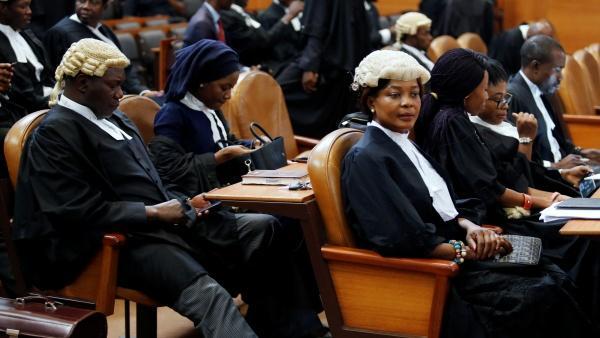 Prominent Nigerian lawyers have joined the respected Nobel laureate Wole Soyinka in pillorying the president Muhammadu Buhari for his order imposing a lockdown on Lagos, Ogun states as well as the Federal capital territory, Abuja.

Critics of the order worry that it could mark the gradual derogation of the people’s liberty while also whittling down the staturoty authority of states in Nigeria.

The erudite law professor and former head of Nigeria’s human rights commission says the order by the president was outdated because it was based on a pre-colonial era quarantine act.

The senior advocate Femi Falana called the president’s order illegal and unenforceable as it has no legal backing.

Soyinka in a statement wondered how a president who has largely been missing in action could suddenly wake up and start issuing orders. “The universal imperative and urgency of this affliction should not become an opportunistic launch pad for a sneak re-centralisation, no matter how seemingly insignificant its appearance,”the globally acclaimed playwright said.

However, Minister of Justice Abubakar Malami roundly berated critics of the president and of his order saying Buhari acted within the powers conferred on him by the Quarantine Act 1990 CAP 384.

According to the minister, “It is important to inform the discerning members of the public that the President did not make a declaration of a state of emergency under Section 305(1) of the 1999 Constitution (as amended) which would have required the concurrence of both House of the National Assembly.

“Even at that Section 305(6)(b) of the 1999 Constitution (as amended) permits a proclamation of a state of emergency to run for a period of 10 days without the approval of the National Assembly when the parliament is not in session as in the present situation wherein the National Assembly has shut down.

“The learned silk also goofed when he questioned the President’s powers to restrict movement and claiming that such powers can only be exercised by the state governors and the respective state assemblies.

“It is clear from the President’s broadcast that what His Excellency sought to address is a public emergency occasioned by a dangerous and infectious coronavirus disease. The restriction of movement came on the heels of advice received by the President from the Federal Ministry of Health and the NCDC, the two focal agencies in the fight against COVID-19.”

COVID-19: Food delivery is an essential service, but is it safe?

States urged to prepare for further spike in COVID-19 cases