.. As Buhari receives briefing from PTF 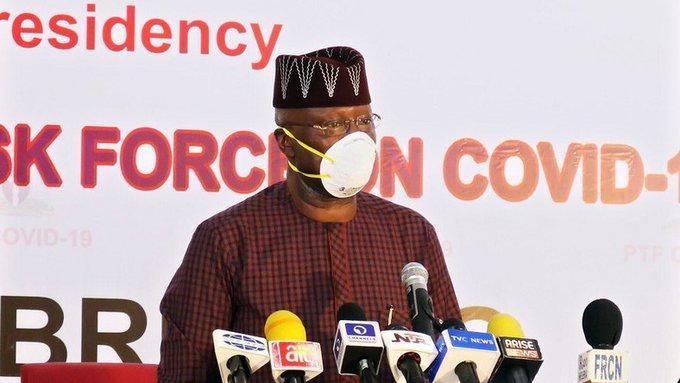 Share
New protocols is expected to be unveiled any moment as the second phase of the ease of lockdown implemented over four weeks from June 2nd – 29th, expires today.
President Muhammadu Buhari had on Monday received briefing from  Presidential Task Force on COVID-19 in State House.
The briefings usually involve review of the expiring protocols/guidelines and granting of approval by the President for the next phase.
Secretary to the Government of the Federation (SGF) and Chairman of the PTF, Boss Mustapha,  Minister of Health, Osagie Ehanire, the Coordinator of the PTF on COVID-19, Sani Aliyu, Director General of the National Center for Disrase Control (NCDC), Chikwe Ihekweazu, briefed the President as the second phase of the gradual easing of the lockdown which  ends today.
Businessday gathered that the team made recommendations for the next phase which will be unveiled any moment.
Expectedly, issues around resumption of flights, inter state travels resumption of schools, amongst others will be addressed under the new protocols.
The PTF had last week submitted new guidelines for reopening of schools to the National Assembly, which is expected to protect school children when implemented
Government is also expected to unfold tougher measures to enforce use of face masks, on the backdrop of rising spread of the Coronavirus amongst communities to check the global pandemic from spreading further.
The second phase of the gradual easing of the lockdown in the country was for an initial period of four weeks, according to Mustapha
President Buhari had on April 27 announced the gradual easing of a five-week lockdown in FCT, Lagos and Ogun state.
The lockdown was eased to a nationwide night curfew (8 p.m. to 6 a.m.) from May 4 to May 17.
The first phase of the lockdown was subsequently extended by two weeks elapsed midnight on June 1.
In the second phase, government had relaxed  restrictions on banking operations and worship places.
Federal government had retained nationwide curfew but the time was reduced from 10pm to 4am, to limit social interactions and, therefore, reduce the risk of the transmissions of the virus which is now on community transmission level.
It had also removed restrictions on the movement of goods and services in the second phase.
Share FacebookTwitterLinkedinWhatsAppEmail