FG to ramp up production of sanitisers from local manufacturers 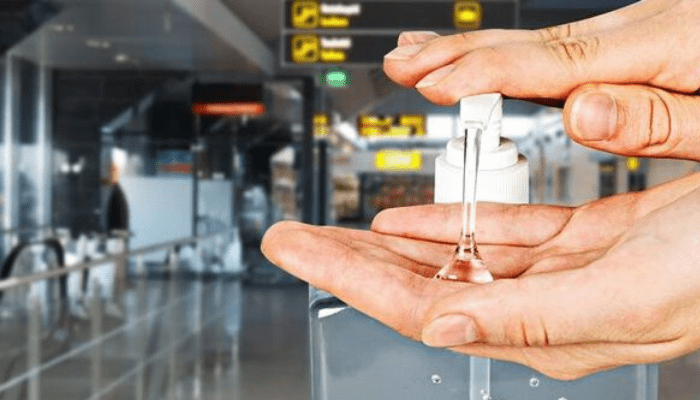 Share
The federal government on Thursday declared that it will engage local manufacturers to produce materials needed to fight the dreaded coronavirus pandemic, including hand sanitizers, masks, and ventilators.
Minister of Health, Osagie Ehanire stated this at the daily briefing of the Presidential Task Force on COVID-19, in Abuja
This is  just as it also debunked  claims in the social media that materials supplied by the  Chinese billionaire, Jac Ma  were  contaminated.
The Presidential Task Force on COVID-19 headed by Secretary to the government of the Federation, SGF Boss Mustapha, said it has deployed 15 teams to states to fight COVID -19 pandemic.
Ehanire, said the decision to explore local production of the material followed the growing number of infected persons in Nigeria and the difficulties in sources for the necessary items to battle the disease.
The task force also called on the states to provide at least 300-bed facilities ahead of outbreaks
Ehanire who in his update on the pandemic, stated that Nigeria has recorded 174 confirmed COVID-19 cases as of date.
They include 91 are in Lagos, 35 in FCT, 14 in Osun, 8 in Oyo, 5 in Akwa Ibom, 4 each in Ogun, Edo and Kaduna, 3 in Bauchi, 2 each in Enugu and Ekiti, and 1 each in Rivers and Benue States.
He stated that nine has been discharged, while others are pending and will be discharged once final tests are done.
On the number of deaths, he said only * two fatalities are on record, these  being cases with other serious pre-existing illnesses.”
“As contact tracing and testing capacity is being ramped up, more and more cases will be found and the number of new confirmed COVID-19 cases is expected to rise initially.
We also worry about persons, especially Nigerians, returning to the country through land borders, who run a higher risk of infection while in a confined space for a long time, like transit in a crowded bus or car.”
He, therefore, advised that all travelers postpone non-essential travel, whether national or international.
“In this regard, Nigerians are also advised to remain where they are resident and so stay safe, except if returning home from a journey.
With the expanded national case definition and the addition of two laboratories to the NCDC network of COVID-19 molecular laboratories, the national testing capacity has increased. Moreover, the lockdown in high burden States presents the advantage of reduced population mobility and leaves more people at home to be found during contact tracing.
“All of this means that more people and samples can be collected and tested more quickly, giving a shorter turnaround time, but it also means that more cases will be discovered initially than before.
” With 71% of the over presumed 6,000 or more contacts now traced, the number of confirmed cases will be rising dramatically. Contact tracing will still be intensified to reduce the number of outstanding cases.
The SGF while providing details of the account, said there is only one account that has been opened by the office of the Accountant General of the Federation.
“I got a letter today. There should be no doubt as to who is in control of the account.
On power supply, the SGF said the President had granted an order allowing for an exemption for the oil and gas industry to enable adequate supply to power the power plants
On the order restricting movements, he said the order has not been relaxed and urged Nigerians to cooperate with the security operatives
” The protocol has not been relaxed, if anything, we have reinforced the restrictions.
Even some of you that have been exempted, we had to bring some clarification.
He disclosed that the task force restricts local market operation to four hours. You don’t need more than four hours.
On grains released, he said Mr. President ordered the release of the strategic grains reserve. He has ordered the release of 70,000 tones.
” We shall continue to expand the number of isolation centres and prepare ICU units across the country for those who may have complications.
Minister of Humanitarian Affairs and Disaster Management, speaking on interventions,  said the government tried as much as possible to see that it take into consideration the social distancing policy.
” If you were there up you see that the people that we’re brought in to disburses were soaked, but people outside that might not be even the beneficiaries were the one causing the crowing, but henceforth we will put in measures to avert that.
” I want to say this stay at home policy that was given is not being observed. When I went to Kwali yesterday, most people were doing their normal businesses.
” So I think we really ave to enforce this stay at home directive.
The Minister who noted that many people did not look like they are aware of the directive, said the SIP has been on since 2016 and the social national register that we have as at March 31, 2020, is made up of 11,450,537 poor and vulnerable people in 35 states and 453 Local Government Areas across the country.
Now, currently, the beneficiaries that we give this cash transfer to are 2.6million people.
” In FCT, we have 5,982 households, in Nasarawa, we have 8,271 households, Katsina has 6,732 households, and Anambra has 1,367 households, and by general standard, households composition is 6 persons.
She appealed to citizens to stop spreading malicious rumors around.
She assured that no section of the country will be marginalized being a National programme irrespective of religion or political affiliation.
“We are thinking of expanding the register, we are in touch with the UN social protection donor group to see how the register can be rapidly expanded to cover additional 1million households.
But we have 11.4 million households in the register that are ready for this intervention.
The way people are captured is by community engagement. We go in and reach the community, opinion leaders, religious leaders who are the ones that decide which families fall within that category of poor and vulnerable households.
And that is what we use, so there is really accountability and transparency in this regard.
Share FacebookTwitterLinkedinWhatsAppEmail