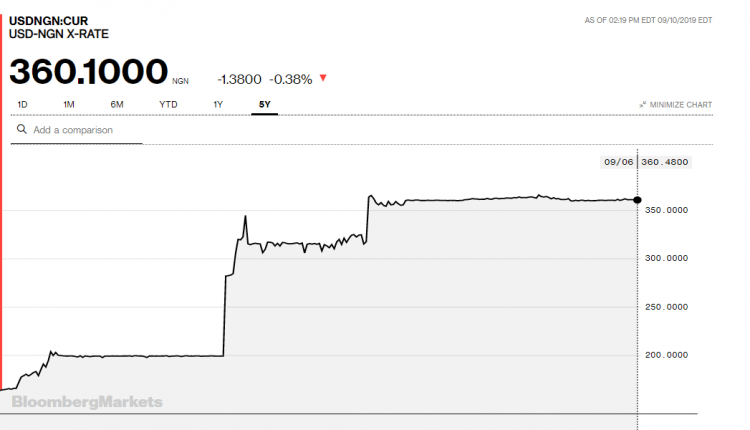 The relative stability of the naira between 2018 and half-year 2019 saw Nigerian top banks realize fewer cash from foreign exchange trading.

“The stability of naira has been counterproductive for banks because the only reason when they would gain or lose is when there is volatility. Once volatility is taken out, gain will be marginal,” He posited.

If the value of the local currency appreciates after the conversion, banks will record foreign exchange gain, and vice-versa. This is important for banks as they receive foreign currency payments from offshore customers and also from domestic customers that sends payments in foreign currency.

Analysts say the reduction in the number of foreign exchange windows over the past years has seen opportunity for arbitrage fizzle out, hence why lenders had smaller gain from forex trading.

Nigeria currently operates a system of multiple exchange rates. The International Monetary Fund has warned that the absence of a single widow creates confusion and deters foreign investments.

In late 2015, the bank pegged the local currency at roughly N200 against the dollar until June 2016 when tumbling oil prices pressured the naira, forcing the apex bank to devalue it to about N305, and introduce measures to save it from weakening further.

Some of the strategies include hiking monetary policy rate to a record hike 14 percent to curtail inflationary pressure that may result from exchange rate pass-through to domestic prices, and restricting access to forex on 41 items, that could be produced locally.

Of recent, the Buhari-led government ordered the apex bank to halt forex supply for food importation, saying forex should solely be used to diversify the economy.

For half-year periods of 2018 and 2019, when naira traded around N360 per dollar on I&E window, most top lenders had declines in their net trading income.

There are no signs if the fiscal & monetary authorities will unify the windows in mid-term.  It is generally believed that naira float would open up the economy to foreign capital to help stimulate economic growth.

This is why people are calling for harmonised window. If we have just one window in Nigeria, it becomes harder for banks to exploit,” Ademuwagun added.

Atedo Peterside steps down from Flour Mills’ board to focus…