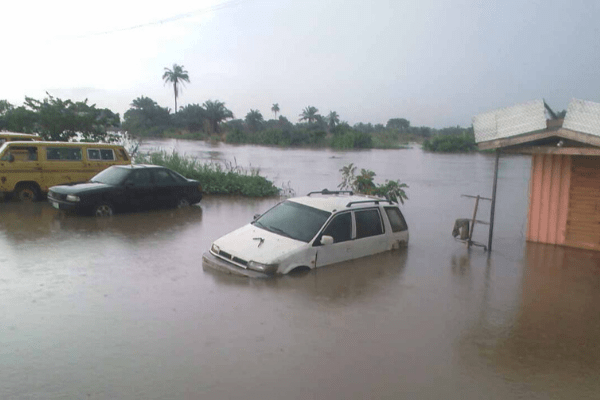 Residents of Isheri, a community bordering the Ogun River and Lagos, have cried out over recurring flooding of their homes, accusing the Ogun-Oshun River Basin Development Authority (OORBDA) of worsening their woes.

The residence at a press conference in Lagos alleged that the authority was releasing water from Oyan Dam reservoir in the wrong months.

According to them, OORBDA’s failure to release water from November to July as per the communiqué of May 2017, which ultimately would control the water and solve the flooding problem was an act to keep operating the reservoir as a fish pond which generates huge profit to the organisation.

Abayomi Akinde, spokesperson for the community and chairman, Riverview Estate Residents and Stakeholders Association, explained that the Oyan Dam commissioned by President Shehu Shagari in 1983 and installed with three turbines meant for generating power has not served its purpose but has instead been turned to illegal fish pond. He alleged that the workers at the dam claim that if the water was released during the dry season fishes would likely die.

Akinde refuted the public statement made by the Ogun-Oshun RBDA that their houses were located on a flood plain, which was sold to members of the communities by land grabbers.

It would be recalled that on October 21, 2019, Olufemi Odumosu, the managing director, Ogun-Oshun RBDA, in a statement said that due to the floods caused by the yearly rain, they opened the Oyan Dam on May 22, 2019, so as to create space to accommodate excess water for proper flood control.

Odumosu in the statement blamed the flooding of the Isheri area on the impact of global climate change which he said has resulted in exceptionally high and prolonged rainfall experience.

However, the residents, including Funmilola Bisiriyu, the chairman, Isheri North GRA, Abiola Abioye, chairman, Isheri Estate Community (ISECOM), Akintola Omigbodun, property owner at Isheri North Resident Scheme, said that the current rainfall levels were not as high compared to the past.

According to Akinde, “In the 18-year from 2000, global sea levels rose by 32.4mm and thus we have not observed a significant threat to Apapa Wharf and to the Marina in Lagos Island from sea level rise. We pray that the OORBDA is made to follow the path of rectitude and that water releases from Oyan Dam reservoir would be from November through to July such that the reservoir is almost empty in July and the reservoir is tilled up in August, September and October for flood-free experience along the River Ogun,” he said.

The residents said this was an area where both Lagos and Ogun governments could generate more revenue if it was well maintained as residents would feel more obliged to pay taxes as and when due.