Meet the best and worst countries to start a career

The United Kingdom, Germany, Canada, United States and Japan have been ranked the best five countries to start a career globally by US-based CEOWORLD magazine.

Nigeria was joined by Uruguay, Libya, Syria and Yemen on the list of the worst countries to start a career.

Africa’s largest economy occupied the 124th spot globally, falling behind peers such as South Africa which ranked highest in Africa at 59th, followed by Egypt at 65th and Mauritius at the 66th spot.

The United Kingdom was the best country to begin a career globally, with Germany, Canada and the United States in the 2nd, 3rd and 4th spot, respectively. 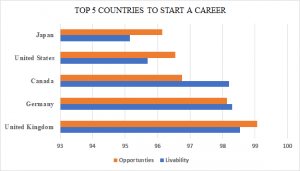 The study is based on a questionnaire-based detailed global survey by the CEOWORLD magazine in partnership with the Global Business Policy Institute (GBPI) with a sample of 186,000 graduates.

The ranking is not so much of a surprise as Nigeria is still lagging behind in most of the metrics taken into consideration in the survey. 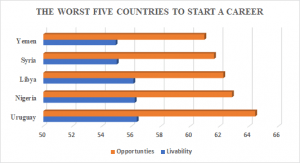 “On one hand, employers are making the case that some graduates are unemployable due to the absence of technical skills required for the job,” Olugunro said.

“The employment conditions in Nigeria make it difficult to start a career in Nigeria,” said Oluebube Ezeoke, a senior analyst at Enzo, Krypton and Company.

“An average Nigerian graduate is not skilled enough to meet the heavy requirement for employment, making it hard to get a job. The poor average starting salary also makes it difficult to invest in personal development while on the job,” she said. 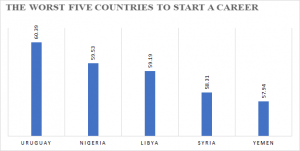 Nigerians are having one of their worst years as petrol prices and electricity prices have been recently increased causing more pain for the population.

The depot price of premium motor spirit (PMS) otherwise known as petrol has been increased to N151.56 per litre, up from N148 per litre. The Nigerian Electricity Regulatory Commission has approved the increase of electricity tariffs from 30.23 per kwh to 66 per kwh.

The World Bank has also estimated that the poverty rate will increase from 40.1 percent in 2019 to 42.5 percent in 2020, dragging 5 more million Nigerians into poverty this year.

Nigeria’s environment is not so conducive for doing business, as there are challenges which make running a business in Nigeria difficult.

Although Nigeria moved 15 places to rank 131st on the World Bank’s Doing Business 2020 index compared to its 2019 spot but experts have said that does not necessarily mean an improved country.

“The business environment is not suitable for small scale producers; the poor operating conditions, infrastructural challenges, and epileptic power supply make it hard to do business in Nigeria,” Ologunro said.

The survival rate for most business start-ups in Nigeria is low. A report by Weetracker in collaboration with GreenTec Capital Africa Foundation ranked Nigeria seventh on the continent in the top ten countries with the greatest number of start-up shutdowns. The rate of start-ups failure in Nigeria is at 61.07 percent, according to the report.

Pollution is still a major challenge in Nigeria. According to the World Bank, “58 percent of all Nigerians lack access to basic sanitation and 47 million people still practice open defecation, a number second only to India”.

Pollution, especially air pollution is dangerous to the health of Nigerian workforce.

“The government needs to invest in health and education to boost the productivity of Nigerians,” Ezeoke said.

According to the World Bank, Nigeria will lay a good foundation for long-term growth by investing in Nigeria’s children, youth and women as the country has the sixth-lowest Human Capital Index in the world.

Nigeria is also about to overtake India as the country with the most under-5 child deaths in the world, over 700,000 a year, according to the Bank.

One in every three children under five years of age (32percent) suffers from chronic malnutrition, among the highest in the world.

Nigeria will need to prioritize the health and education of its citizens to achieve a sustained growth and make Nigerian youths more competitive.

SMEs contribute 48 percent of national GDP, account for 96 percent of businesses and 84 percent of employment. This makes the SMEs very vital to the economy.

“The SMEs contributes largely to the growth of country; Nigeria must invest more in SMEs to make the country more conducive to start a career,” Ezeoke said.

Despite the significant contribution of SMEs to the Nigerian economy, challenges still persist that hinder the growth and development of the sector.

Racing towards economic development in Nigeria: Can agric investment be the miracle?