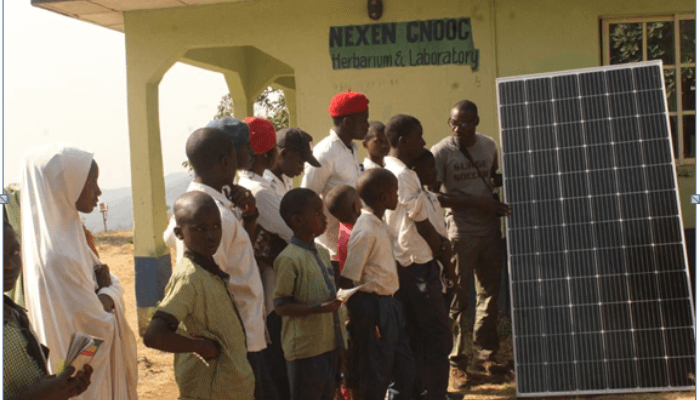 Did you know that some of the most biologically diverse montane forests in the world are found in the mountains of Taraba State, Nigeria? If like me, you didn’t know that, then chances are you also don’t know that there is a forest reserve on the Mambilla Plateau in Northeast Nigeria, covering about 46 square kilometers of land.

Park that under: things you learn while working for All On!

The reserve which has been running almost completely on solar power since 2012 is home to the Nigerian Montane Forest Project, an institute where Nigerian and international Doctoral and Post Graduate students undertake research in montane forest ecology and conservation.

According to Emmanuel Barde Elisha, a Research Associate at the Institute, “The solar system was inefficient…consisting of mismatched panels, a 1.5kVA/24V inverter system and batteries that provided insufficient power to the batteries. The electrical appliances were powered by a 1KVA generator, which was used sparingly due to limited access to petrol and (perhaps more importantly) because it goes against the spirit of the green work the center does,” Elisha said.

Enter All On investee, Creeds Energy…

Creeds recently completed a solar installation to support the Reserve’s remote monitoring activities. The installation consists of a 5kVA 48V inverter system that includes solar panels assembled by another All On investee, Auxano Solar.

I was curious about why Auxano was chosen as a partner in executing this project.

“Auxano solar panels are highly efficient and have a long track record of trustworthiness. High wind loads have been tested and certified for Auxano modules. The solar panels are designed in a way that complements the roofline of the facility and the company used advanced surface texturing to improve efficiency, resulting in longer cell life and better cell performance,” Kabir said

She added that another attraction to Auxano panels is that they are locally manufactured and suitable for the Nigerian climate.

The deployment and installation were not without challenges, however. The Creeds team had to transport fragile equipment across State lines.

“The courier service took about four days to deliver components from Lagos to Jalingo, a distance of about 1,161 kilometers…and then another 311 kilometers from Jalingo to the facility in Ngel Nyaki,” said Kabir.

Yet, not a single component was destroyed, and Creeds successfully completed the installment. The three-day exercise included a full day of training field station staff on how to operate the system.

The installation has made life much easier for the research center as well as the local community by providing reliable electricity to the field station to support remote monitoring, while also supporting forest research and biodiversity.

When I first tried to interview Elisha, we traded calls four times before we eventually spoke via WhatsApp. We also had to speak after business hours because the only way to communicate at the field station was via email and WhatsApp using Wi-fi when he got home, because no mobile network exists in such a remote area!

Since the installation, the field station has also hosted groups of visiting students from the community secondary school whom Elisha teaches on a volunteer basis, and the remote monitoring activities have been greatly enhanced, I’m told.

Back to the little-known fact that Taraba State, Nigeria is home to some of the most biologically diverse montane forests in the world… It turns out this area is home to endangered birds like Bernnaman’s Weaver (Google that!) and some newly discovered plants species. If that’s not interesting enough, how about the fact that this remote environment is a haven for endangered animals such as the Pangolin Brushtail Porcupine and hosts primates such as Chimpanzee, Putty Nose Monkey, Olive Baboon, Tantalus and Mona Monkeys. I can’t help you with images of these creatures, so Google remains your best bet…!